This is the new 2018 Toyota Camry: You’ll buy thousands of them

Nobody has ever felt their breath catch in their throat at the sight of a Toyota Camry, but that hasn’t stopped it from becoming the best-selling car in America for the past fifteen years. Now, Toyota is aiming to “stir the soul” for its eighth generation, with the 2018 Camry promising not only the dependable functionality of its predecessors but some excitement too. Here’s how they’ll do it.

For a start, there’s the revamped design. Toyota has dropped the new Camry lower than its predecessor – the hood is 1.6-inches closer to the road, for instance, compared to the outgoing car – but, by dropping the hip points at the same time, interior space isn’t impacted by the lower roofline. The big, bold grille – which will be different depending on whether you opt for the LE, XLE, SE, or XSE – is unapologetic and, importantly, far less anonymous than the old version. 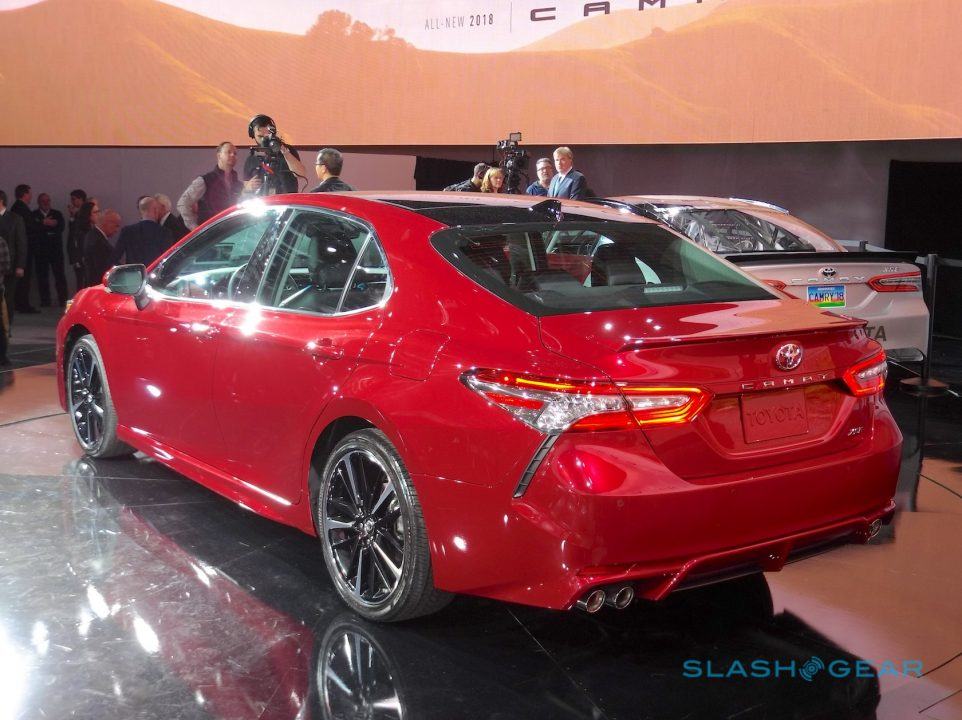 From that point on, there’s more attention to surfacing detail. Crease-lines are sharper and deeper, and the concept of a lower center of gravity – which is indeed lower on this car than the old Camry – is emphasized. Toyota calls it sporty, and even if you’re not feeling so generous it’s clearly better than the anodyne looks of the car it replaces.

Inside, the cabin has also been completely redesigned. New seats get better ergonomics and easier adjustment, while the rear bench has more room than before. There are more soft-touch materials where your fingers fall, and the dashboard looks more “designed” and less like it was just pieced together from a parts bin. 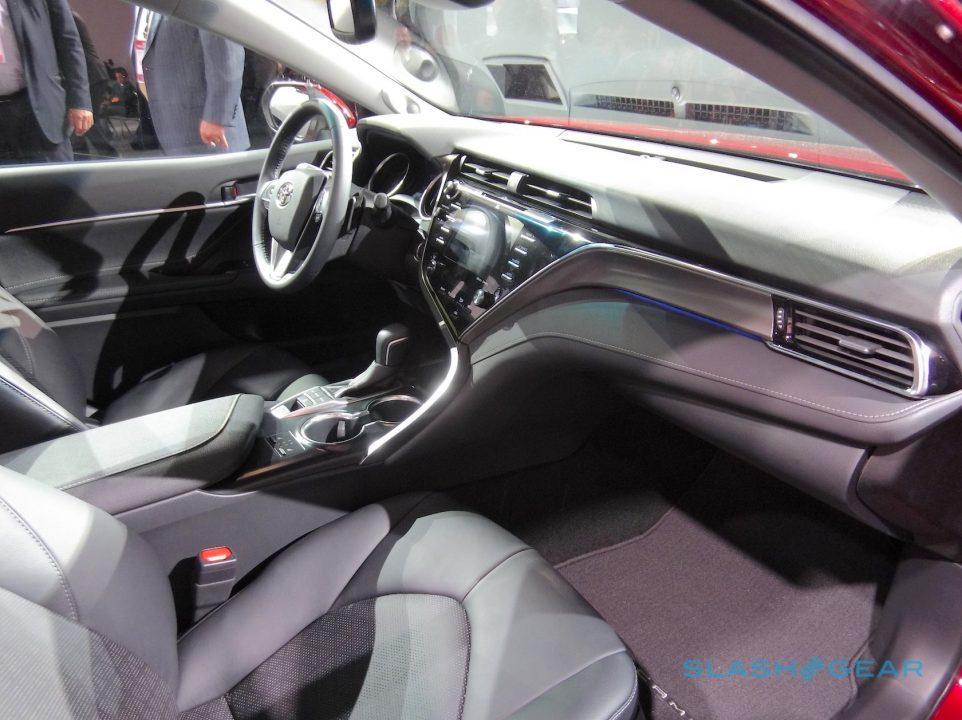 There’s more technology, too. A 10-inch color head-up display can be paired with the 7-inch driver display, and finally there’s an e-inch touchscreen for handling multimedia and HVAC. The latter feels more integrated, too, thanks to its flush fit. Again, it’s a small detail, but it leaves the 2018 Camry feeling far more complete than its predecessor.

Entune 3.0 will be standard on all trims, with the new Camry being the first Toyota to get the updated infotainment system. The entry-level cars will get Connected Navigation Scout GPS Link with Moving Maps, which rely on a paired smartphone; the V6 will get Dynamic Navigation as standard. Updates for mapping and POIs will be pushed out OTA. 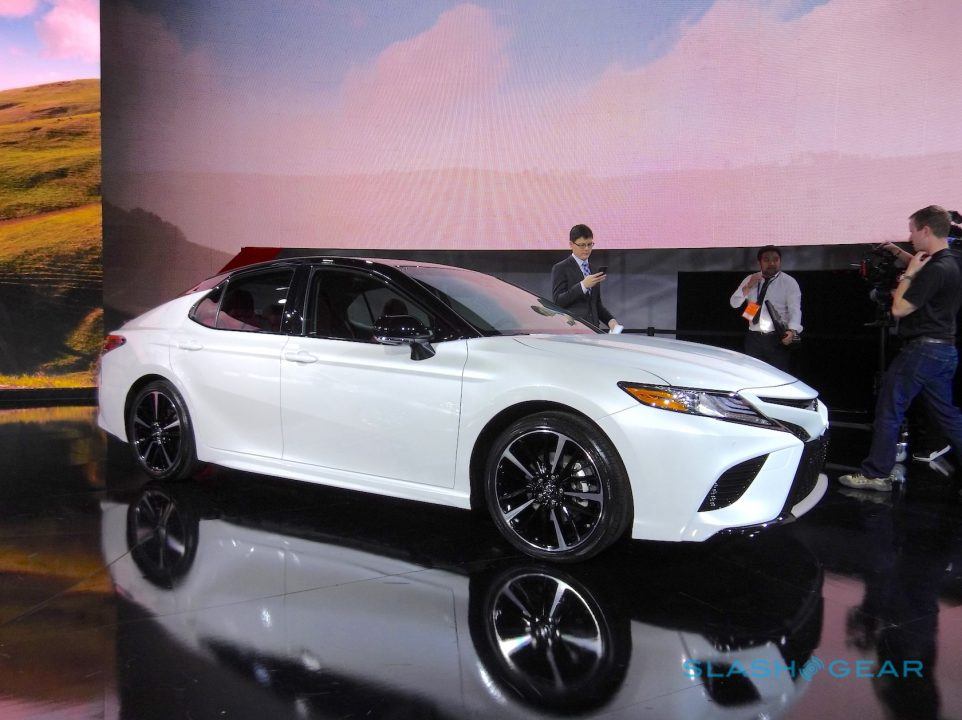 The new system also includes remote start and unlock, while there’ll be the option of 4G LTE with WiFi hotspot support for up to five people. A JBL premium audio system with a 10.1-inch subwoofer and nine speakers will be another option. Safety tech includes pre-collision warnings with pedestrian detection, adaptive cruise control, lane departure warnings with steering assist, and auto high-beams as standard. Blind-spot monitoring, rear cross traffic alerts, and birds-eye view camera will be options.

Underneath, though, are arguably the biggest changes. The 2018 Camry is built on the Toyota New Global Architecture (TNGA) which the automaker has already promised will make for more engaging, fun-to-drive cars. There’ll be three new powertrains, including a 3.5-liter V6 and a 2.5-liter inline four-cylinder, each paired with a new 8-speed automatic transmission, and a new hybrid. 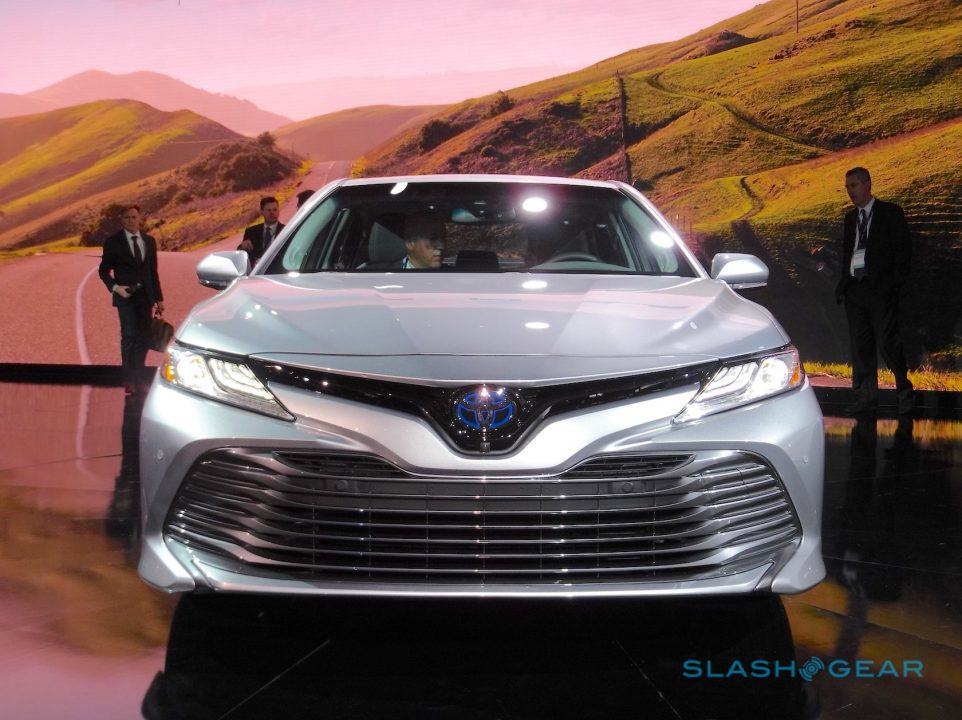 The hybrid will pair the 2.5-liter four-cylinder engine with electric boost, combined with a CVT that simulates a six-speed sequential gearbox in Sport mode. SE and above trims will have paddle-shifters. Toyota moved the batteries from the trunk to under the rear seats, meanwhile, helping with handling by further lowering the center of gravity. No economy figures have been share yet, though the automaker says to expect “Prius-like” numbers.

Pricing will be confirmed closer to the 2018 Toyota Camry’s release date, in the late summer of 2017. 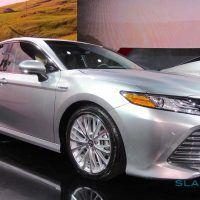 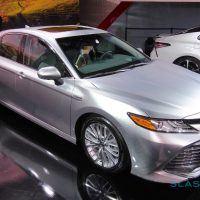 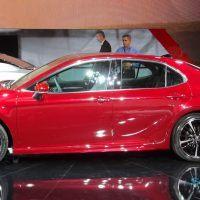 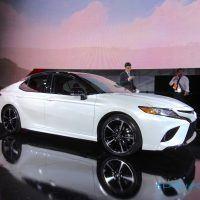 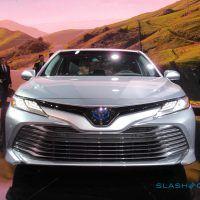 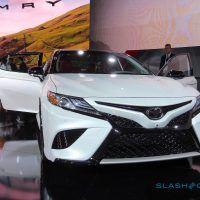 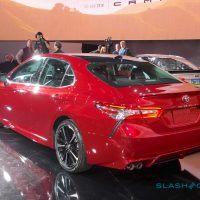 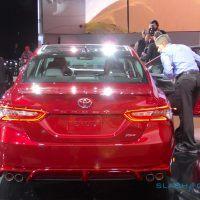 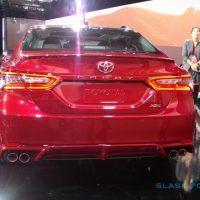 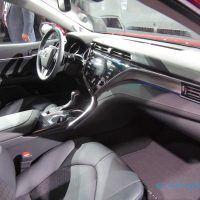