This is the McLaren Senna: Compromise is not an option

What’s a driver to do when a “regular” McLaren isn’t quite fierce enough? The answer might be this, the McLaren Senna, latest model in the British automaker’s legendary Ultimate Series and named after the even more famous Formula 1 driver Ayrton Senna. It’s billed as “the ultimate road-legal track car,” and they might just be right.

It’s been made with one goal in mind: be the ultimate McLaren track car, yet also work on the road. “Legalised for road use,” the automaker says, “but not sanitized to suit it, the new Ultimate Series deliberately compromises McLaren’s trademark breadth of supercar daily usability.”

By letting up on that practicality, the Senna can go fairly wild. It has a 4.0-liter twin-turbocharged V8 engine, the most powerful McLaren has ever produced for a road car. That means 789 horsepower and 590 lb-ft of torque, for a power-to-weight ratio of 668PS-per-tonne.

That comes courtesy of the Senna being the lightest road-legal McLaren since the F1. It tips the scales at 1,198 kilograms (2,641 pounds) thanks to a carbon fiber chassis and body panels. Dubbed the Monocage III chassis, it’s a riff off what we’ve already seen in the McLaren 720S, with every body panel made from the lightweight material.

The engine is mid-mounted, pushing its power to the rear wheels, and the Senna has new RaceActive Chassis Control II (RCC II) hydraulic suspension. That uses double-wishbones with hydraulically interconnected dampers, along with a hydraulic replacement for conventional mechanical anti-roll bars. It also borrows – and builds on – the variable stiffness and ride height technology which McLaren last showed in the P1. 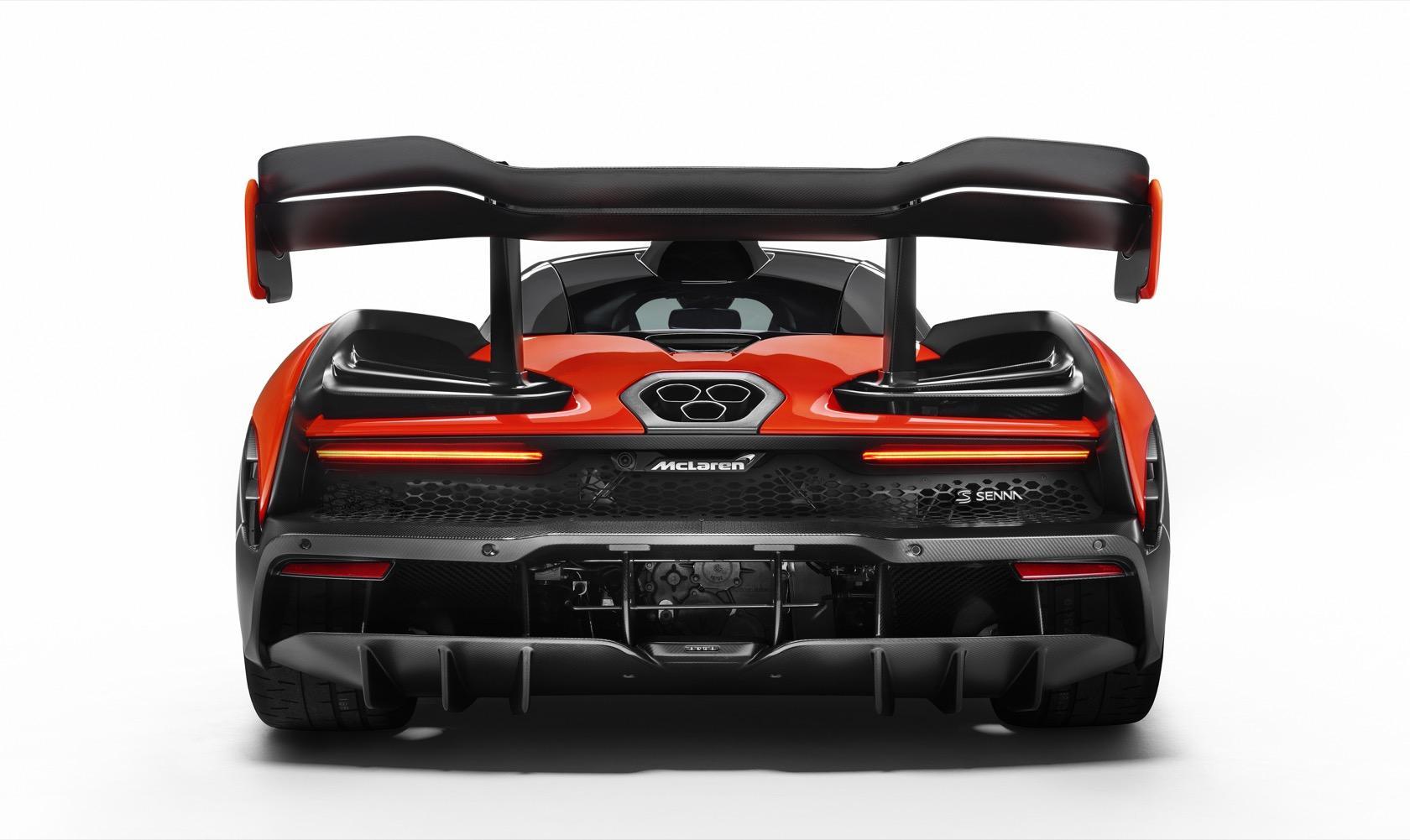 Each damper is connected, hydraulically, both left to right and front to back. There are two valves per damper, independently allowing the car to adjust for compression and rebound. A kinetic roll system, or K-damper, controls stiffness, while the continuously variable RCC II system builds on what was used in the 720S but adds an all-important Race mode. That lowers ride height, drops the centre of gravity, and stiffens the suspension significantly. 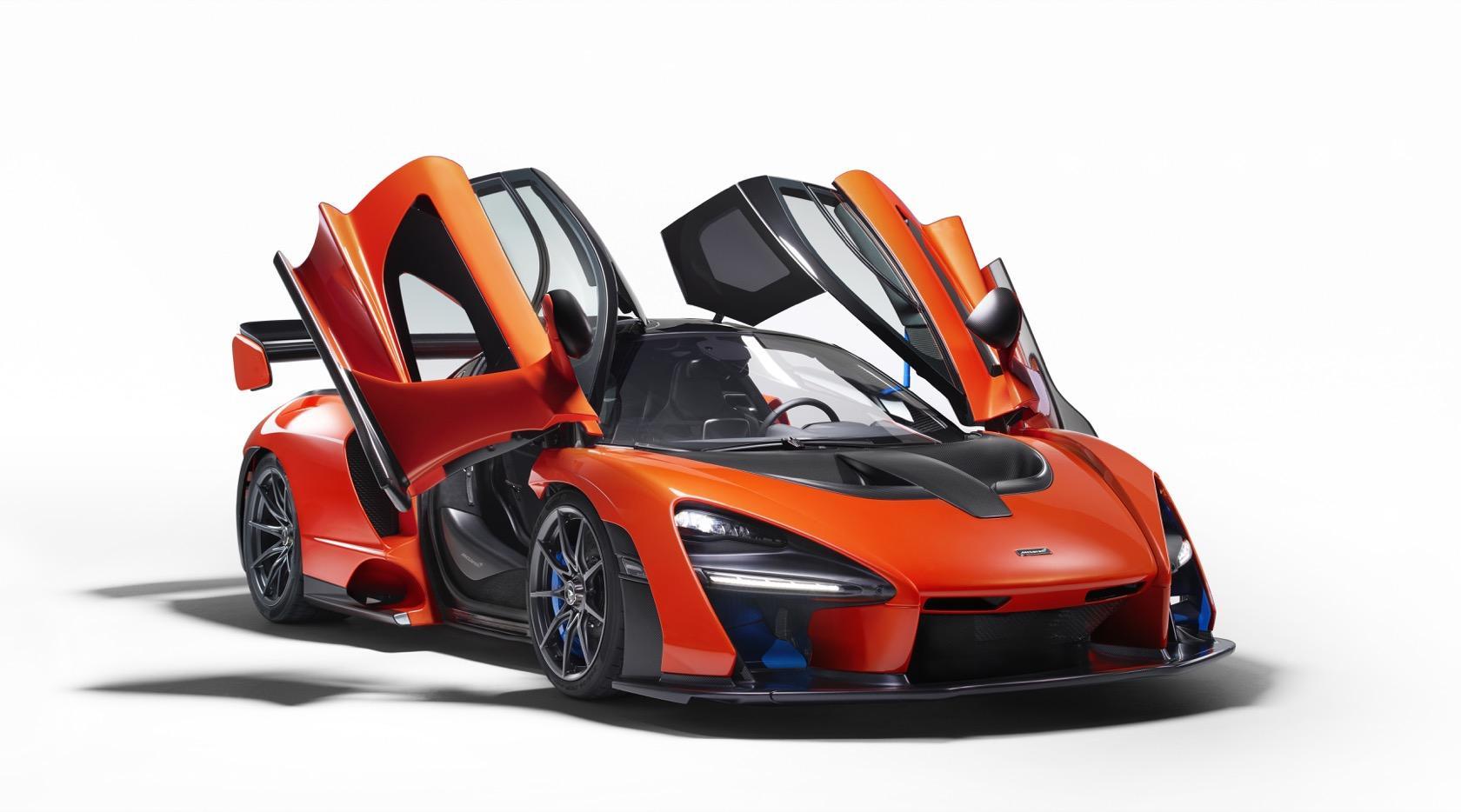 Unlike the Active Dynamics Panel located on the centre console, which is where you’ll find the Comfort, Sport, and Track modes, Race mode is activated with a switch in a roof-mounted panel. That’s also where the engine start button is. 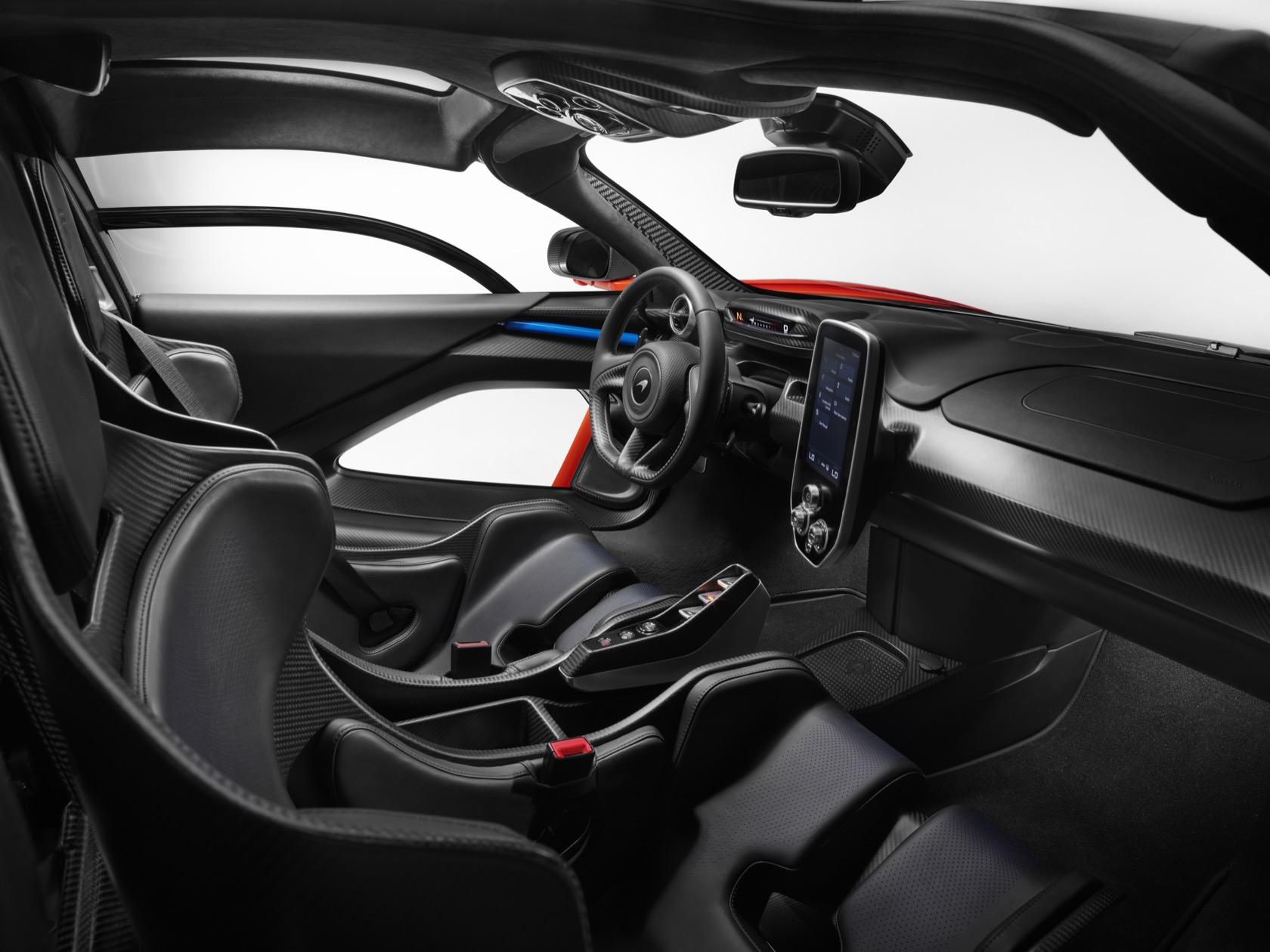 Indeed, the cabin overall is striking. There’s plenty of carbon fiber on show, with a choice of Alcantara or leather for the seats. McLaren has prioritized weight loss over trim, and so elements usually covered – like the gas struts for the dihedral doors – are exposed. Indeed, switchgear in general is sparse: there’s nothing on the wheel, to avoid distractions, and most of the functionality is accessed through the portrait touchscreen in the center console, or the folding driver display behind the wheel. 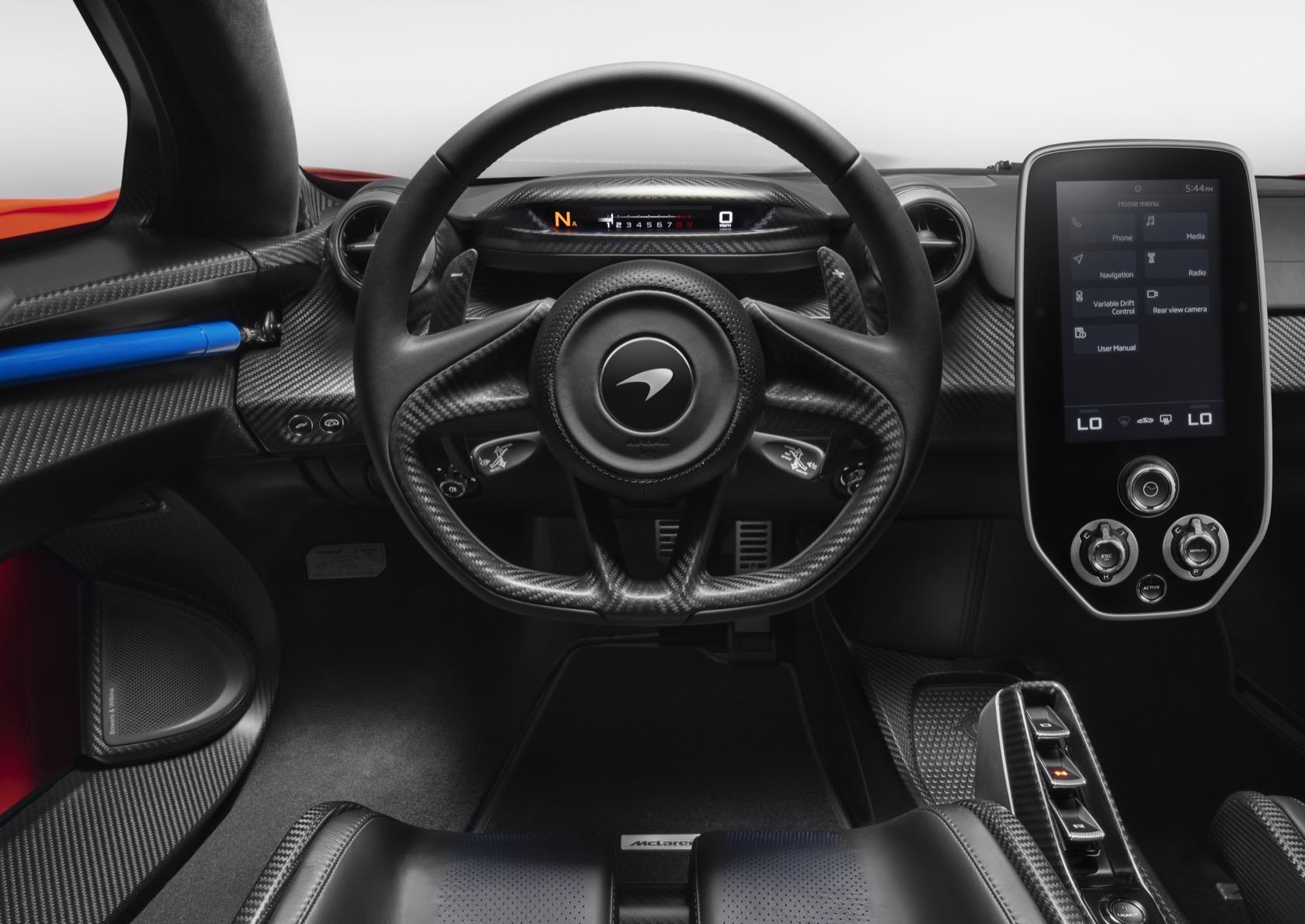 Practicality is both present and absent. On the one hand, the doors have large cut-outs in the roof, while the door sills are low, all to improve ingress and egress even if you’re wearing race suits and helmets. However, there’s only space for a minority of cargo: effectively a nook behind the two seats with room alone for two helmets and two race suits. The two-piece glass side windows only have a smaller opening section in the bottom; you can optionally have their lower halves glazed, to give a glimpse of the track rushing past. 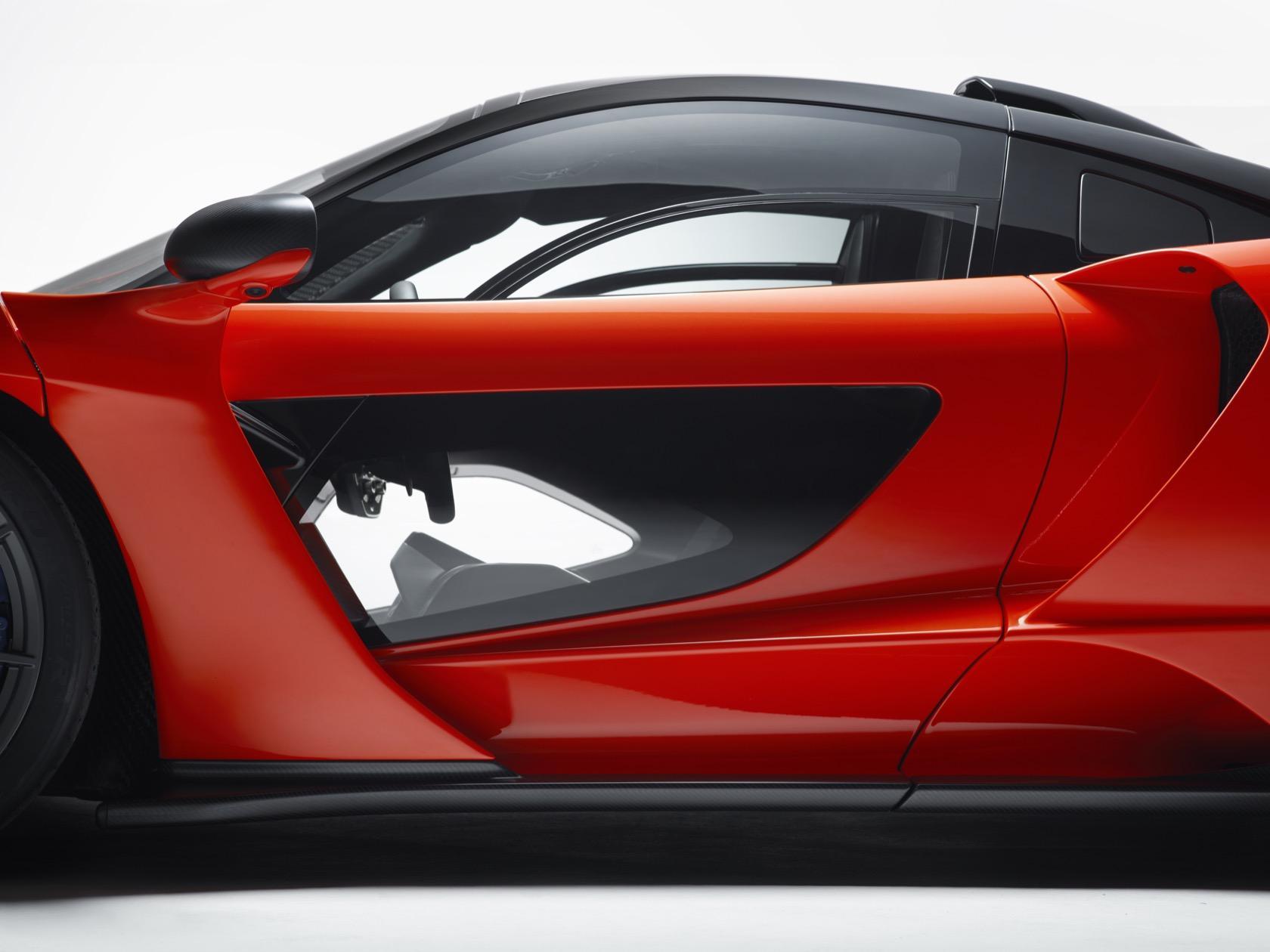 The transmission is a dual-clutch, seamless-shift, seven-speed gearbox. It starts out in fully-auto mode, but you can switch to using the elongated carbon fiber paddles on a rocker behind the steering wheel. You’ll hear the results, too, with McLaren using a “snorkel” intake on the roof and adding a carbon fiber plenum, which have been precisely tuned to combine perfectly with the low-frequency engine sounds. Those have been specifically piped into the cockpit using a unique engine mounting design. 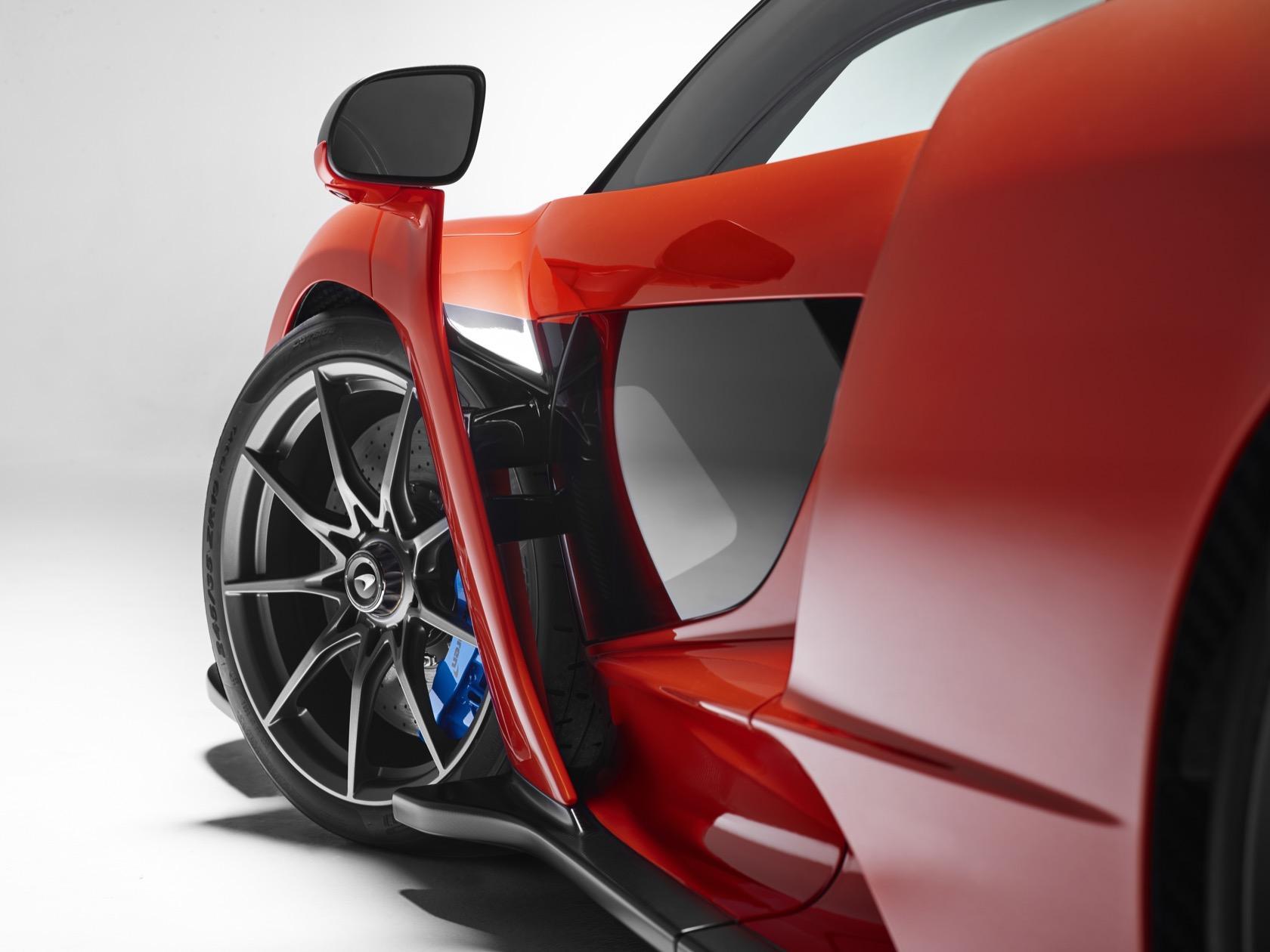 Most controversial, undoubtedly, is going to be the styling. McLaren says it “shocks” but this really isn’t a pretty car. Instead, it’s an example of form following function: the body has been cut open and pared back, reducing weight both functionally and visually. Front and rear active aero adjusts depending on whether you want more downforce in a corner, or less on a straight; that includes the monstrous double diffuser at the rear and the vast, double-element carbon fiber rear wing that towers above it. The latter is constantly being adjusted to optimize downforce, and can flip up to act as a huge airbrake when the carbon ceramic discs alone aren’t sufficient. 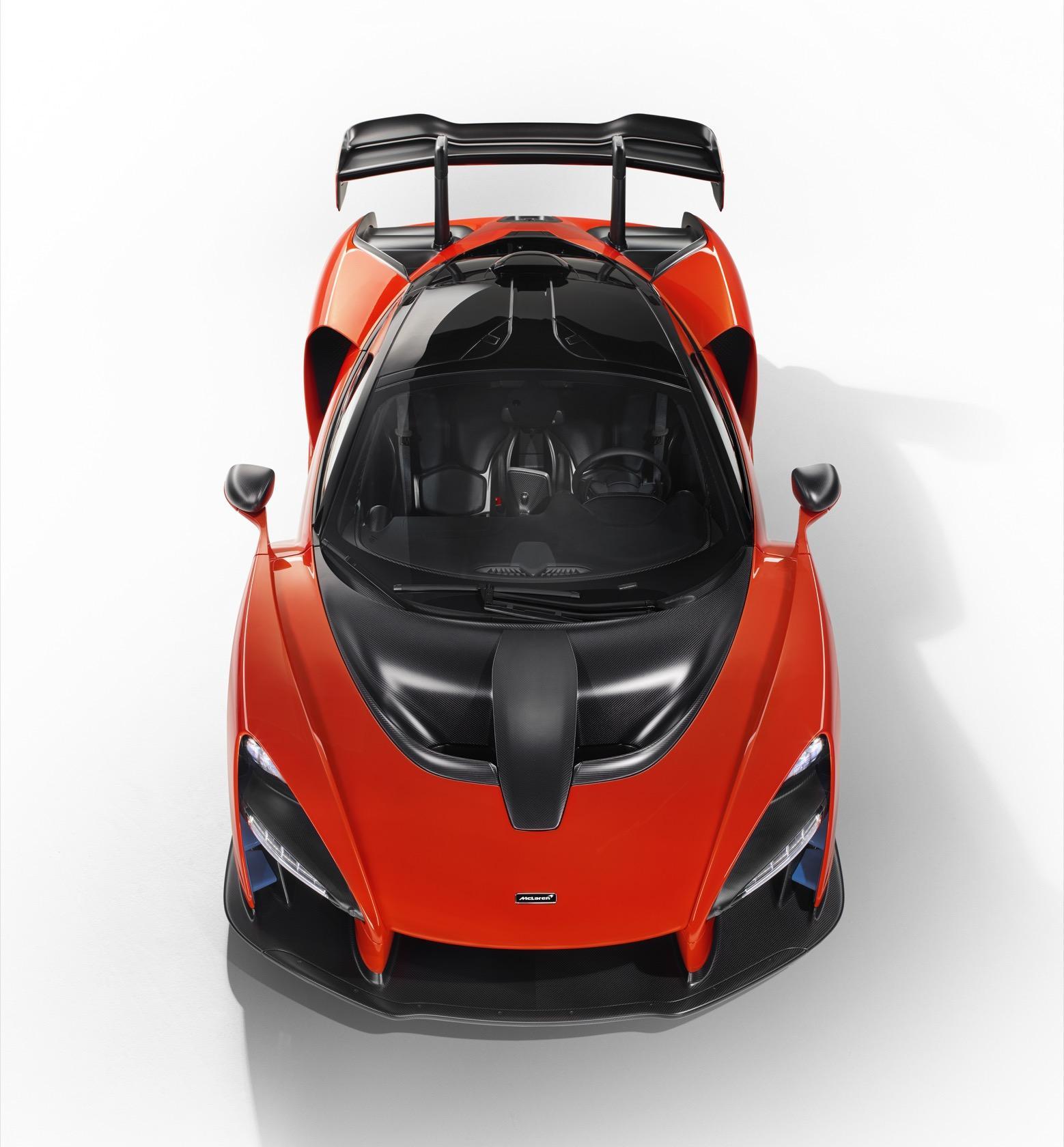 Like with the 720S, McLaren has slotted as many cooling vents in as possible. It’s in the stepped louvres and gurney flaps on the rear deck, along with the angled Inconel and titanium exhaust system which pushes gases away from the rear wing. Slim front and rear LED lights present minimal interruption to the flow of air. 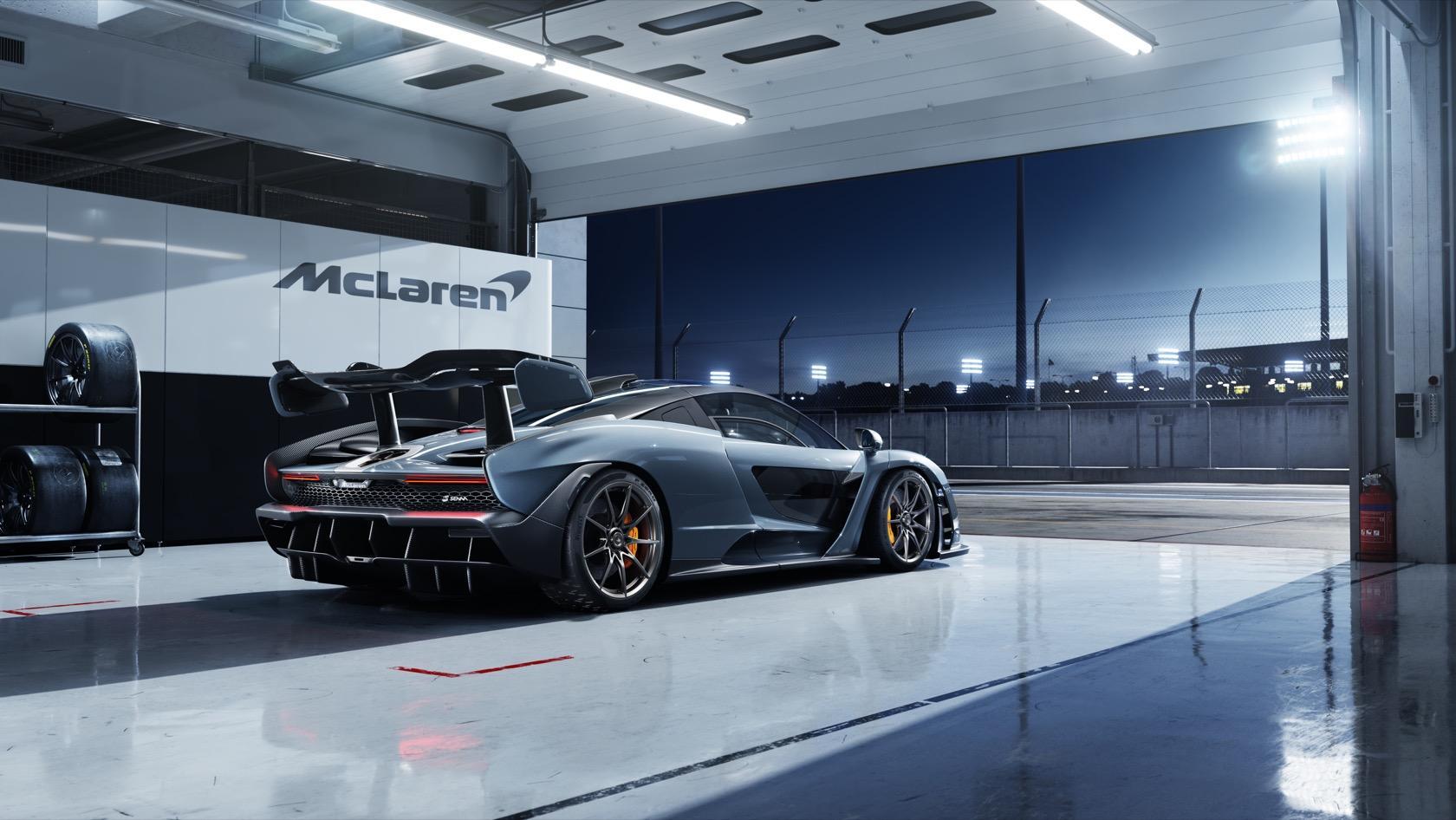 Of course, what we really want to know is “how fast is it?” Sadly, McLaren is playing that card close to its chest right now. Only 500 McLaren Senna cars will be produced, all hand-assembled from Q3 2018, and priced at £750,000 in the UK (or around a million dollars).