In front of a Senate hearing committee SpaceX confirmed this week their plans to create a global internet provider service using space satellites. This service would not be free, but would assist in the FCC’s goal of covering the United States with at least 25 megabits per second (“Mbps”) broadband service. SpaceX is not “giving the world internet” for free – as some news sources have misunderstood and reported – instead, they’re planning to profit from a service that’s sorely needed by the planet.

A statement was read by Patricia Cooper, Vice President, Satellite Government Affairs Space Exploration Technologies Corp (SpaceX) to the Committee on Commerce, Science, and Technology in the United States Senate on the 3rd of May, 2017. “As this Committee reviews broadband infrastructure investments, measures to streamline the regulatory process, and policy reforms to reduce barriers to expansion of broadband access in the United States,” said Cooper, “we are grateful that the Committee is considering the potential capability that a new generation of U.S.-based low-Earth orbit (“LEO”) satellite broadband services can contribute to connectivity.” 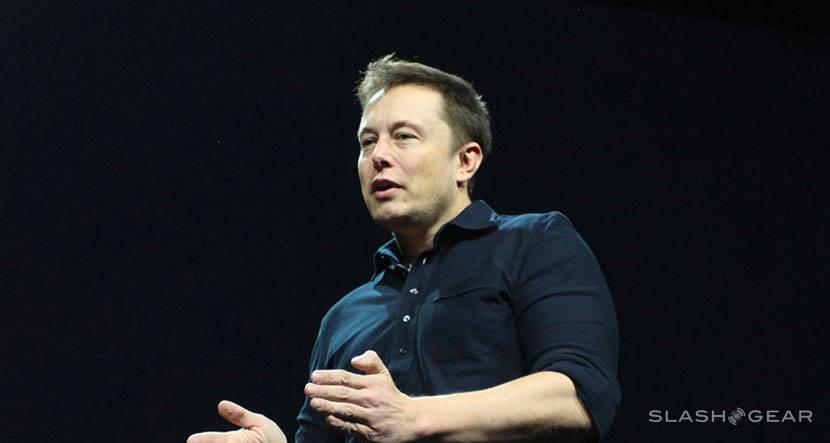 This is not the first time SpaceX has met with the United States government to speak about their space internet program. They’ve been meeting and/or communicating with the FCC, according to the FCC, quite a bit in recent months – dating back in this chart to late November of 2016. Files included in these listings give us some visuals for the network as it’d potentially exist in the near future.

SpaceX shows (in the image below) how each satellite would be able to cover an area with a 1060km radius. Each satellite would potentially roam around our Earth at an altitude of 1150km. Several altitudes were quoted by SpaceX in relation to their technology’s required 40-degree minimum elevation angle. “Satellites operating at 1,110 km, 1,130 km, 1,275 km, and 1,325 km altitude can provide service up to 40.72, 40.59, 39.67, and 39.36 degrees away from boresight, respectively.” 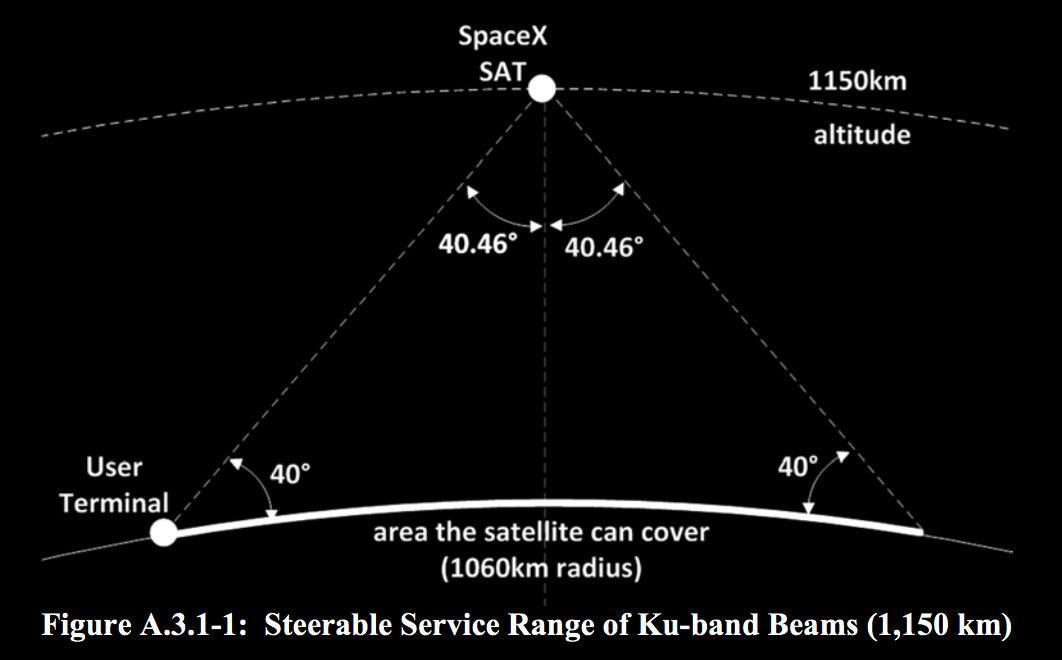 Each one of the total 4,425 SpaceX system satellites was quoted as being designed for a “useful lifetime of five to seven years.” Once a satellite’s life is over, it’ll execute a reentry process to move toward the surface of the Earth. It’s final reserve of fuel will be used to move the satellite into the Earth’s atmosphere where it will burn up entirely. 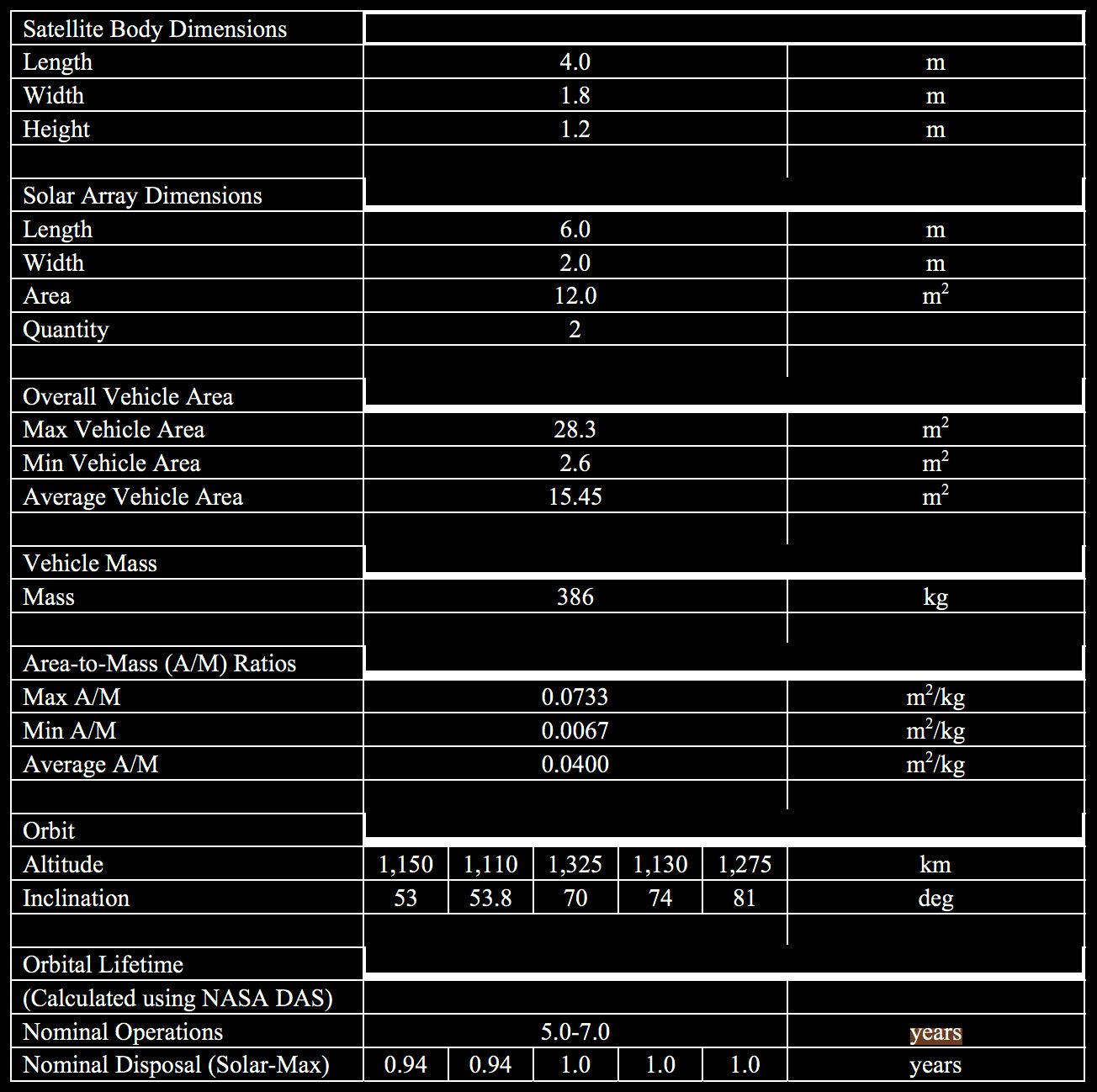 ABOVE: Included VIA SpaceX’s FCC application which can be found in its entirety at the FCC VIA the link above. This file shows the projected size and specifications for the hardware needed to create the SpaceX system for space internet. The file as utilized by this article was filed on 11/22/2016 with commenter Space Exploration Holdings, LLC, called “Technical Attachment (CORRECTED)” at that time.

How Much Will this Internet Cost Me?

SpaceX said that they intend on providing consumers with broadband internet service “at fiber-like speeds” with low-Earth orbit satellites. SpaceX suggested that they are “designing the system from the ground up with cost-effectiveness and reliability in mind”. This efficiency in design includes “the design and manufacturing of the space and ground-based elements, the launch and deployment of the system using SpaceX launch services, development of the user terminals,” and perhaps most important: “end-user subscription rates.”

The presentation SpaceX made to the Senate this week suggested that they did not yet have price models that they’d be sharing with the public. Surely they’ve got prices in mind, but it’s apparently not yet time to share what they are. They did say that “SpaceX intends to market different packages of data at different price points, accommodating a variety of consumer demands.”

The most concise way to say what SpaceX is doing is as follows. SpaceX is applying for authority to construct, deploy, and operate a non-geostationary orbit (NGSO) fixed-satellite service system. SpaceX wants to use these satellites to make available internet access for the whole world. SpaceX hopes to begin launching satellites for this program in the year 2019.

For more information on the program SpaceX is aiming for, have a peek at the SpaceX Testimony File before the Broadband Infrastructure Hearing which took place earlier this week at the US Senate. That statement was read aloud to the Committee on Commerce, Science, and Technology in the United States Senate on the 3rd of May, 2017.