This iPhone survived a month under ice: Why yours probably wont

Canadian news (CTV News) reported an epic tale of extreme iPhone survival this week. Ice Fishing on Waskesui Lake in Saskatchewan one Angie Carriere dropped her iPhone 11 Pro down the fishing hole. About a decade ago, even the newest model smartphones in the world would’ve been an immediate lost cause. Here in 2021, there’s more room for hope.

This does not mean that the phone will immediately begin to give way to water ingress any lower than 2 meter, or longer than 30 minutes. It means that you’re safe at those levels – they’re well within the bounds of safety, given the physical construction and materials included with the iPhone 11 Pro.

The CTV News report suggests the iPhone 11 Pro spent a month at the bottom of a lake under its frozen surface in early 2021. Given the relative lack of boat traffic and extreme stillness of the water during this period of time, the device’s survival is entirely possible – and fairly likely.

If you dove underwater with the same phone down 3 meters and moved it back and forth rapidly, even for just a few minutes, you could potentially wreck the phone’s ability to work properly. It’s all about how ideal the conditions are for the device during its period of underwater action.* 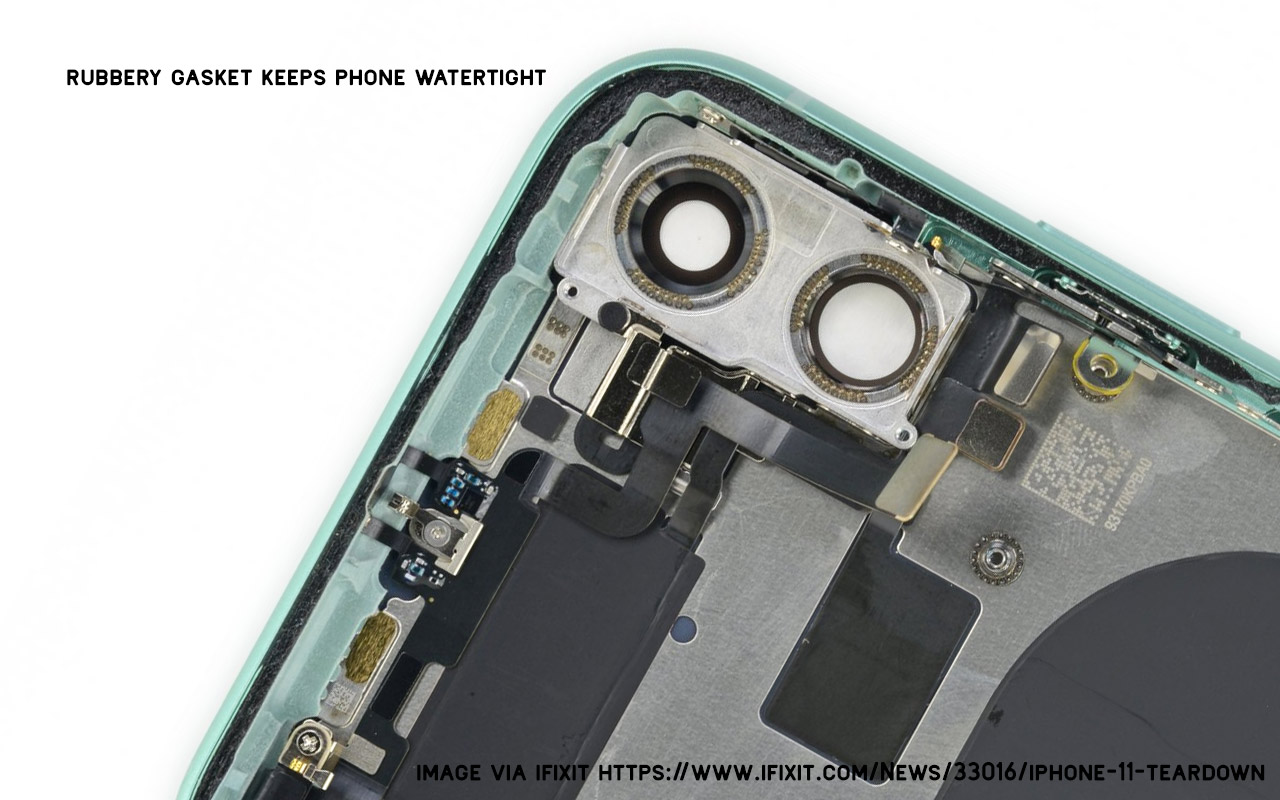 ABOVE: iPhone 11 teardown image from iFixit showing the innards of the device. Here you’ll see some of the rubbery bits that keep the phone watertight.

A similar situation occurred earlier this month at Harrison Lake, Fraser Valley, British Columbia, Canada. Per a CBC report, an iPhone 11 was dropped in the water in September of 2020. The owner of the phone was driving a bumper boat and dropped her phone over the side.

Six months later(!) the phone was found by a diver whose mission it is to find trash and remove it from the lake. The diver also found a an original Motorola Razr flip phone (snapped in half), and a couple of empty smartphone cases.

Another pair of dives by this same diver in August of 2020 delivered four (or six?) more phones, of which one still worked. That, too, was an iPhone 11.

*On the other hand, if we take all of these finds as evidence, it would SEEM that the iPhone 11 line is pretty gosh-darned good at keeping itself safe both in water under a frozen surface AND in late Fall/early Winter waters.

But again, this doesn’t mean it’s a smart idea tossing your IP68 (or thereabouts) smartphone in the drink just to see if it survives. It only takes a moment for a little water to sneak its way in, and doom! Your phone is done!