This incredible floating display belongs in a sci-fi movie

Floating displays may be the stuff of science-fiction, but one research team is looking to make them real, using a carefully tuned acoustic-potential field to create swarms of particles clustered into physical graphics. Dubbed Pixie Dust – after the Peter Pan quote – the system can cause objects up to 7g per cubic centimeter to hover in moving forms, effectively translating digital objects into real, and with a Kinect sensor thrown in they can even respond to the viewer’s movements.

Using acoustic fields to levitate particles like polystyrene balls isn’t new, but this new research from Yoichi Ochiai and his team at the University of Tokyo takes it one step further and animates them.

To do that, multiple particles are levitated on standing waves created by not one emitter bank but four, spread around the display area. That creates an area in which each object can be positioned with half-millimeter accuracy, and moved at up to 72 cm/s.

The result is a virtual display that builds raster graphics and vector graphics in thin-air, reconfiguring them in a way that looks almost magical. Throw in a Kinect sensor, as the team did, and you can even interact with the dynamic objects by moving your hands around. 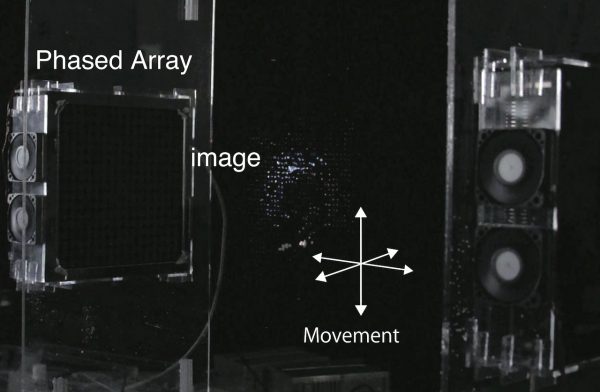 Because of the strength of the fields, it’s also proved possible to float clusters of objects, like lightweight cut-outs and models. They needn’t be solid, either: Ochiai suggests the same technology could suspend particles of fog, water droplets, or soap bubbles.

The team will present its work at the upcoming SIGGRAPH conference in August. While the technology is obviously far from being consumer-ready, we’re nonetheless looking forward to being able to float popcorn off our coffee table and into our mouths on movie night.