This humanoid robot is about to fly like Iron Man

It’s common for researchers around the world to conduct investigations into creating better drone aircraft. It’s also common for researchers to conduct investigations into building better humanoid robots. What’s not common is research that focuses on combining those technologies to create a humanoid robot, like iRonCub, that flies.

The flying humanoid robot iRonCub gives off more than a little Iron Man vibe. iRonCub has four jet engines, and the shiny silver pants seen in the image above were used to prevent the robot from setting its legs on fire. Eventually, those shiny, flame-resistant pants were replaced with flame-resistant plates to protect all the robot’s mechanical innards.

iRonCub was created by researchers at the Center for Robotics and Intelligent Systems at the Italian Institute of Technology (IIT). One of the key aims for this project is making robotic aerial manipulation more robust and energy-efficient than ever before. As explained by Daniele Pucci, head of the Artificial and Mechanical Intelligence lab at the institute, the current most common solution for aerial manipulation is a quadrotor aircraft fitted with a robotic arm (via IEEE). 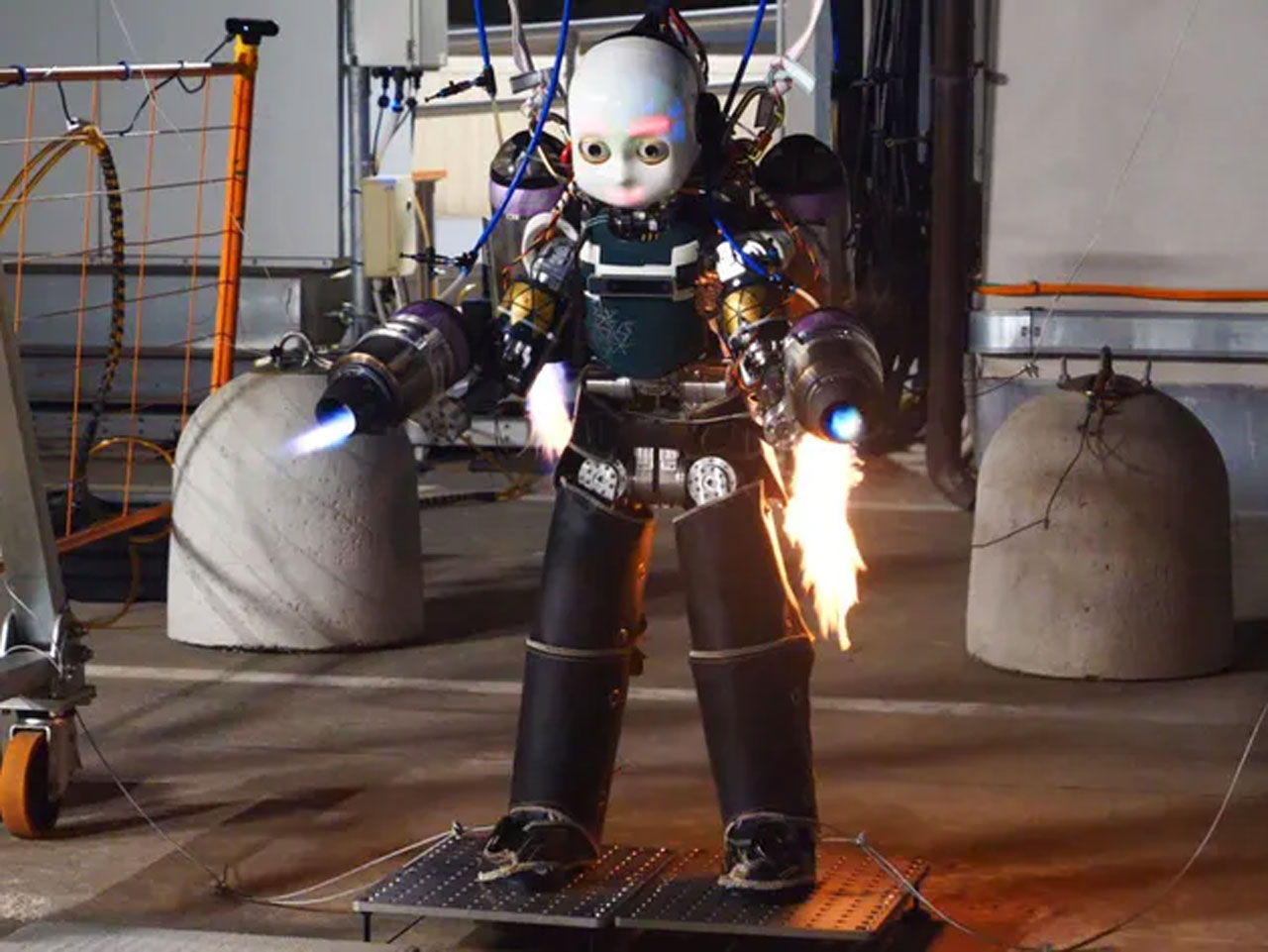 Robots of that type cannot move around the environment utilizing contact forces, and they typically struggle to fly in windy conditions while manipulating objects. Pucci believes a humanoid robot could be easier to control thanks to a contact point between the robot and the environment, and that that humanoid robots could be a testbed for flying exoskeletons for humans.

Humans have long dreamt of flying without having to get inside an aircraft. There would be several uses for exoskeletons to allow humans to fly around the environment, including making travel and commuting easier. Exoskeletons allowing humans to fly could also have military applications.

Pucci and other researchers on the project admit there is a long road ahead of them, but that they hope iRonCub will be able to conduct controlled flights soon. Numerous hurdles still have to be overcome, including creating a general control framework. That control framework would have to include manipulation, contact-locomotion, and flight. The team also has to determine how and when to activate the jets when the robot is walking.

The team needs to determine at what walking speed is it more energetically convenient to turn the auxiliary jetpack on. Researchers also have to develop a way to deal with landing impacts to allow for a decent transition from flight to walking. Judging by the flame-resistant materials needed for the robot’s body, the team also has to figure out how to prevent the robot from being damaged by the flames produced by the jet engines.

While there are similarities between the fictional Tony Stark Iron Man suit and iRonCub, there are some significant differences. Iron Man didn’t rely on a jet pack on its back. Rather, the fictional Iron Man suit had jets on its hands and feet. iRonCub, by contrast, has small jet engines in place of hands and a twin-engine jet pack on its back. iRonCub seems to be a combination of Iron Man and The Rocketeer.

Considerable effort is being put into robotics research all around the world. Earlier this week, we talked about a company called Engineered Arts that had developed what it called an artificial body. The goal of the artificial body is to give Artificial Intelligence a physical body in which it can reside. Engineered Arts created a robot called Ameca, and designed said robot to support advanced movement, natural gestures, and intelligent interaction.

The developers behind the robot also designed Ameca to be cloud-managed with an API development kit. The robot is also modular, allowing it to be upgraded as technology advances in the future. The current version of Ameca can’t walk, but the company says it will walk eventually. Its modular design will allow robots in the field to be upgraded.

The medical field has also seen significant scientific breakthroughs in robotics in recent years. Researchers have been working on tiny robots that can be filled with drugs and introduced into the bloodstream. The goal is to take powerful drugs for fighting diseases like cancer and deliver them directly to the target cells helping to eliminate some of the systemic side effects of powerful cancer medications.

In this research, the scientists developed shape-changing microrobots guided using magnets outside the body to a specific location inside the body. The robots were designed to change shape in response to lower pH because tumors are acidic. The first of these microrobots were designed utilizing the shapes of animals, including fish, butterflies, and crabs, each with their own special features and abilities uniquely suited to their form.