This groundbreaking metalens could make AR and VR bulk-free

A groundbreaking new lens could make future augmented reality glasses lighter and less obtrusive, replacing complex displays with a revolutionary alternative. Rather than stacking multiple traditional lenses to focus different colors of light, metalenses rely on nanostructures to do so on a single, flat surface. However, until now their potential has been more theoretical than practical.

Although advances in modern AR and VR headsets have seen them shrink down in bulk and weight, the optical requirements inevitably run into the rules of physics. To work, the lenses need to focus the whole visible spectrum and white light. However, the different properties of each light wavelength makes that tricky.

As blue wavelengths are slower to pass through glass than, say, red wavelengths, they won’t reach the eye simultaneously. The result is chromatic aberration, and until now the fix has been to use multiple lenses with different thicknesses, materials, curves, and treatments that, when stacked together, evens the optical performance for all the wavelengths involved. In the process, though, it makes for a fairly hefty package.

Researchers at the Harvard John A. Paulson School of Engineering and Applied Sciences (SEAS) believe they’ve cracked the problem of replacing such lens assemblies. Their solution depends on metalenses, a flat surface that uses nanostructures to focus light and thus avoid chromatic aberration. Although not new technology in themselves, this is the first time that metalenses have been shown with the ability to deal with the entire visible light range. 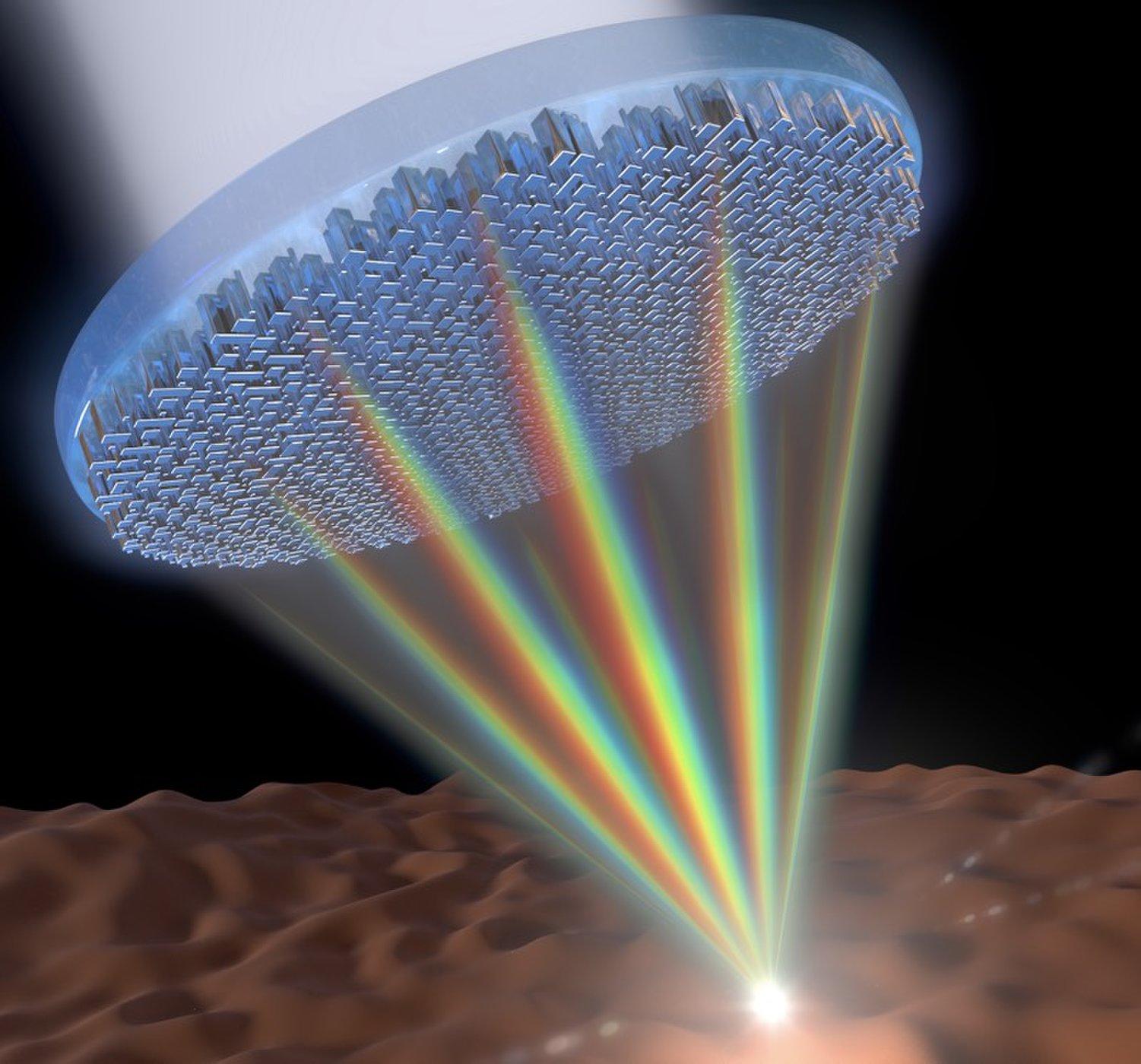 “Metalenses are thin, easy to fabricate and cost effective,” Federico Capasso, the Robert L. Wallace Professor of Applied Physics and Vinton Hayes Senior Research Fellow in Electrical Engineering at SEAS and senior author of the research, said of the development. “This breakthrough extends those advantages across the whole visible range of light. This is the next big step.”

The key is the surface treatment. Arrays of titanium dioxide nanofins – tiny ridges on the surface – are used to focus the wavelengths of light. By tweaking the height, shape, width, and distance of those nanofins, and then pairing them to control the refractive index and thus delay light passing through by different amounts according to wavelength, the single layer can make it so all of the wavelengths involved reach the same focal spot at the same time.

“By combining two nanofins into one element, we can tune the speed of light in the nanostructured material, to ensure that all wavelengths in the visible are focused in the same spot, using a single metalens,” Wei Ting Chen, a postdoctoral fellow at SEAS and first author of the paper, said of the research. “This dramatically reduces thickness and design complexity compared to composite standard achromatic lenses.”

The next big challenge will be matching the full wavelengths that the human eye is capable of seeing, and increasing the size of the metalens so that it’s practical for headsets and cameras. For the latter to work, it’ll need to be around 10 mm (0.39 inches) in diameter, the researchers point out. Clearly, though, there are expectations that it’ll be practical: Harvard has licensed the IP of the project to an unnamed startup, which will be working on a commercial implementation of the metalens technology.