Elon Musk has been promising to make a Tesla pickup truck for years now, but robot-maker extraordinaire Simone Giertz couldn’t wait any longer… so she made her own. The Tesla Truckla is her take on the pickup the electric automaker should be building, based on the Model 3 but after having a serious run-in with an angle grinder.

Giertz has carved out a highly-entertaining niche for herself on YouTube, making robots that are more about generating laughs than doing anything productive. Behind that, though, are some serious engineering skills – something you’d need to have if you’re thinking about taking on the sort of high voltage found in a modern EV.

The Truckla transformation was more than a year in planning along, Giertz says. Along with a team of engineers, designers, and others, she took a fairly straightforward approach for converting the Model 3. Out go the rear seats, and indeed the trunk, replaced with a far more practical truck bed.

The result is a car that looks like a regular Tesla up until around the B-pillar, but then which gets very strange indeed from that point back. While we’ve seen conversions of Tesla EVs before – typically into convertibles – this is one of the more impressively considered ones. Giertz, for instance, has added work lights on top, and a handy frame structure to which cargo could be lashed. There’s also an outlet in the bed, so that power tools can be operated from the Model 3’s batteries.

That’s something Elon Musk has been talking about himself, as the Tesla CEO has dropped heavy hints about the official pickup he has in mind for the automaker. That won’t look like a Model 3, mind, with Musk promising something more futuristic for the utility vehicle. However it’ll still deliver things like worksite flexibility, lengthy range, and decent pulling power.

When, though, the official Tesla pickup truck will go on sale is still unclear. Musk has most recently said he hopes to unveil the vehicle later in 2019, but he’s still got the Model Y to put into full production before he can turn his attention to another model. 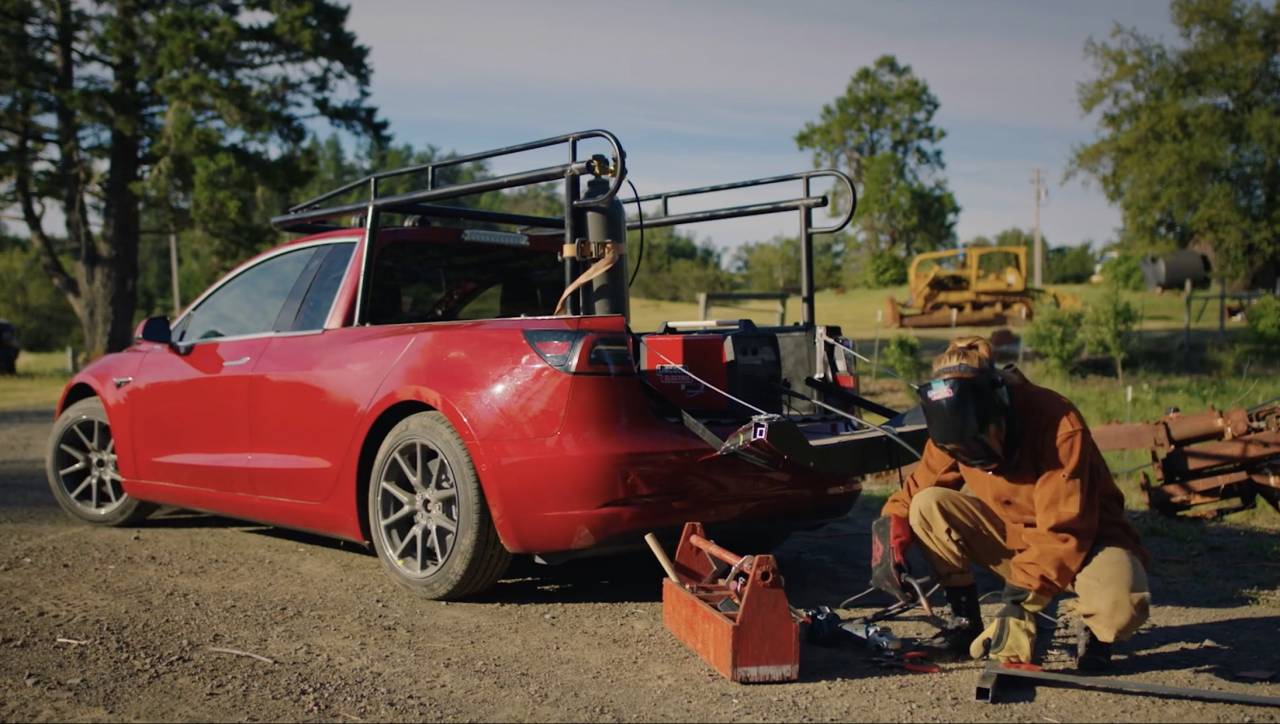 That said, most potential Tesla truck drivers are probably still better off waiting for Musk’s car than trying to make their own. Sawing through sheet metal is one thing: doing so when there’s a huge, high-powered battery nearby is another. Then there are the challenges Giertz and her team encountered with the car locking itself down once it recognized someone had tampered with it.

None of that proved insurmountable, but it’s still more than the average would-be pickup owner is likely to want to face. It means Truckla is probably going to be a one-off, at least until Tesla gets into gear.