A nodosaurid ankylosaur revealed to the public this week showed exceptionally preserved parts and signs of strong predation pressure. This dinosaur was first discovered back on March 21, 2011 by mining machine operator Shawn Funk and crew in Alberta, Canada. After 7,000 hours over nearly 6 years of solitary cleaning at the The Royal Tyrrell Museum, museum technician Mark Mitchell’s is part of the creature’s history as much as he is a part of its name: Borealopelta markmitchelli.

This creature was 18-feet (5.5-meters) long and rolled with armored skin, spikes, and a body that made it a tank-like beast. Further clues suggest that this creature’s body provided more than just these sharp defensive bits to keep it out of predator’s mouths. At an estimated body mass exceeding 1,300 kg, this dinosaur and its close relatives have only ever been assumed to protect themselves from predators using the most basic of defense systems. 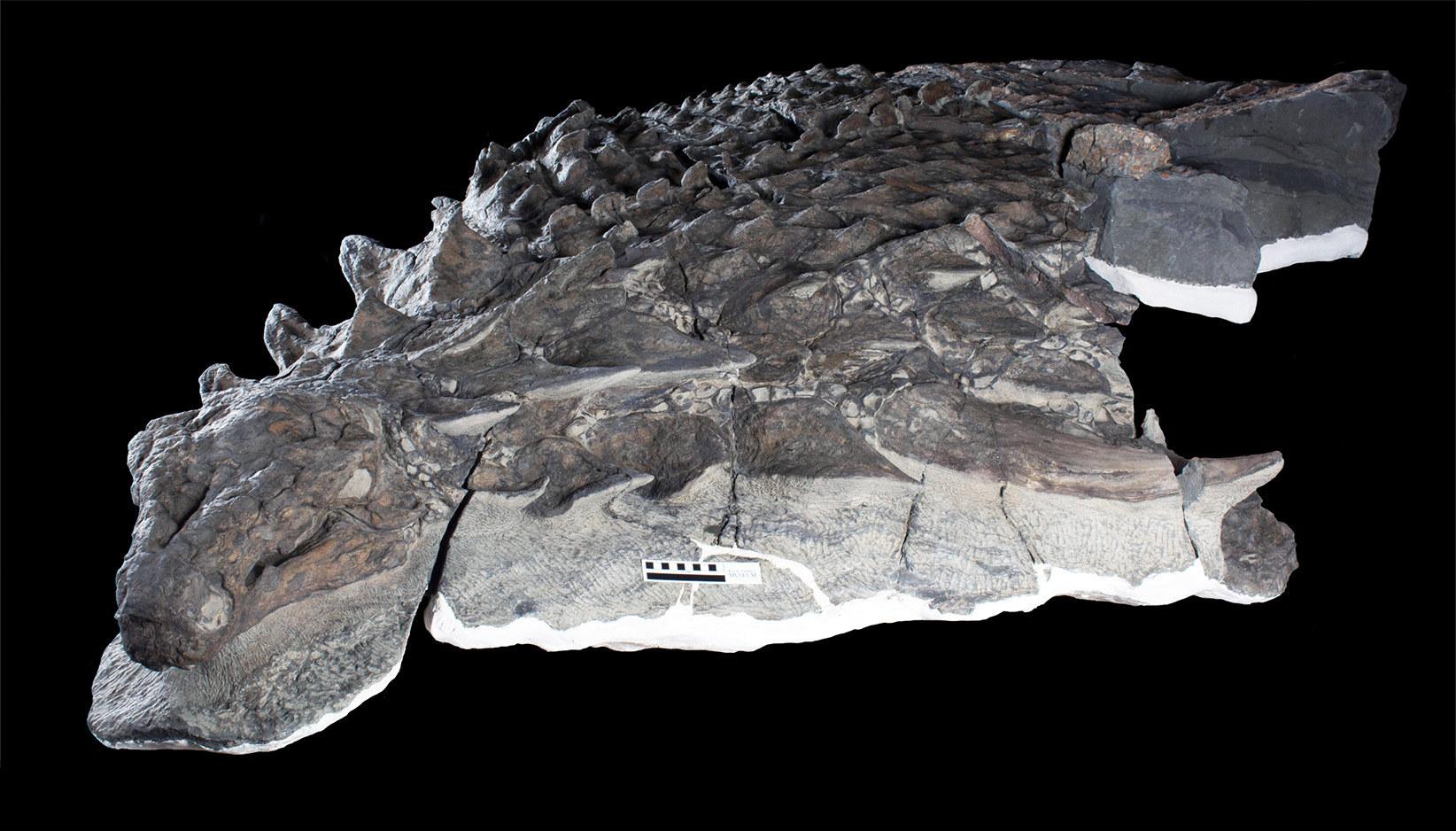 The researchers that published the first research paper on this dinosaur centered their report on predation. This dinosaur body – the parts they have left – give significant new clues on predator-prey dynamics of Cretaceous animals. The importance of the extremely good preservation of this dinosaur cannot be understated.

This specimen provided “integumentary structures as organic layers, including continuous fields of epidermal scales and intact horn sheaths capping the body armor.” It’s thick – and it shows signs of coloration of the dinosaur, too. “We identify melanin in the organic residues through mass spectroscopic analyses and observe lighter pigmentation of the large parascapular spines, consistent with display, and a pattern of countershading across the body.” 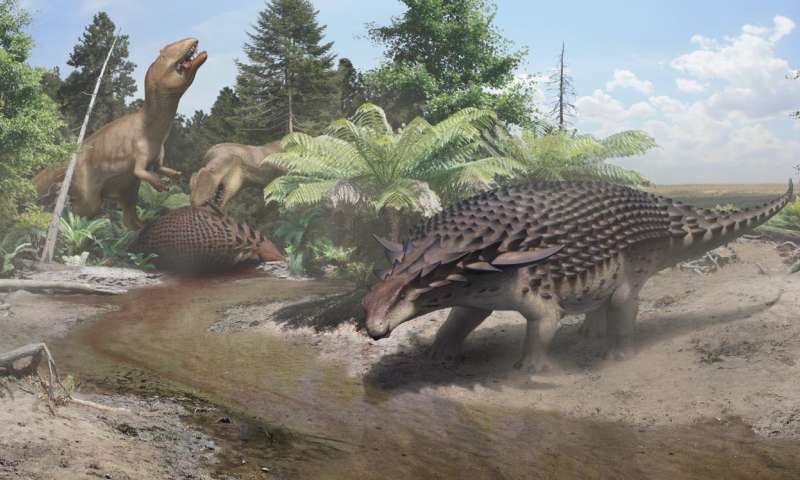 The dinosaur was apparently reddish-brown, with a color distribution that suggests the presence of countershading camouflage. Countershading is the shading of an animal that conceals their shadow – in this case dark on top, light on the bottom. The image above shows how the animal may have been colored – based on this research on clues from the animal itself.

This is easily one of the largest – heaviest – known creatures in history to have (potentially) employed countershading as defensive camouflage. As the paper suggests, “The occurrence of countershading in TMP 2011.033.0001, with an estimated living mass of 1,300 kg, represents the largest recorded terrestrial animal with self-shadow concealment in the form of countershading.” 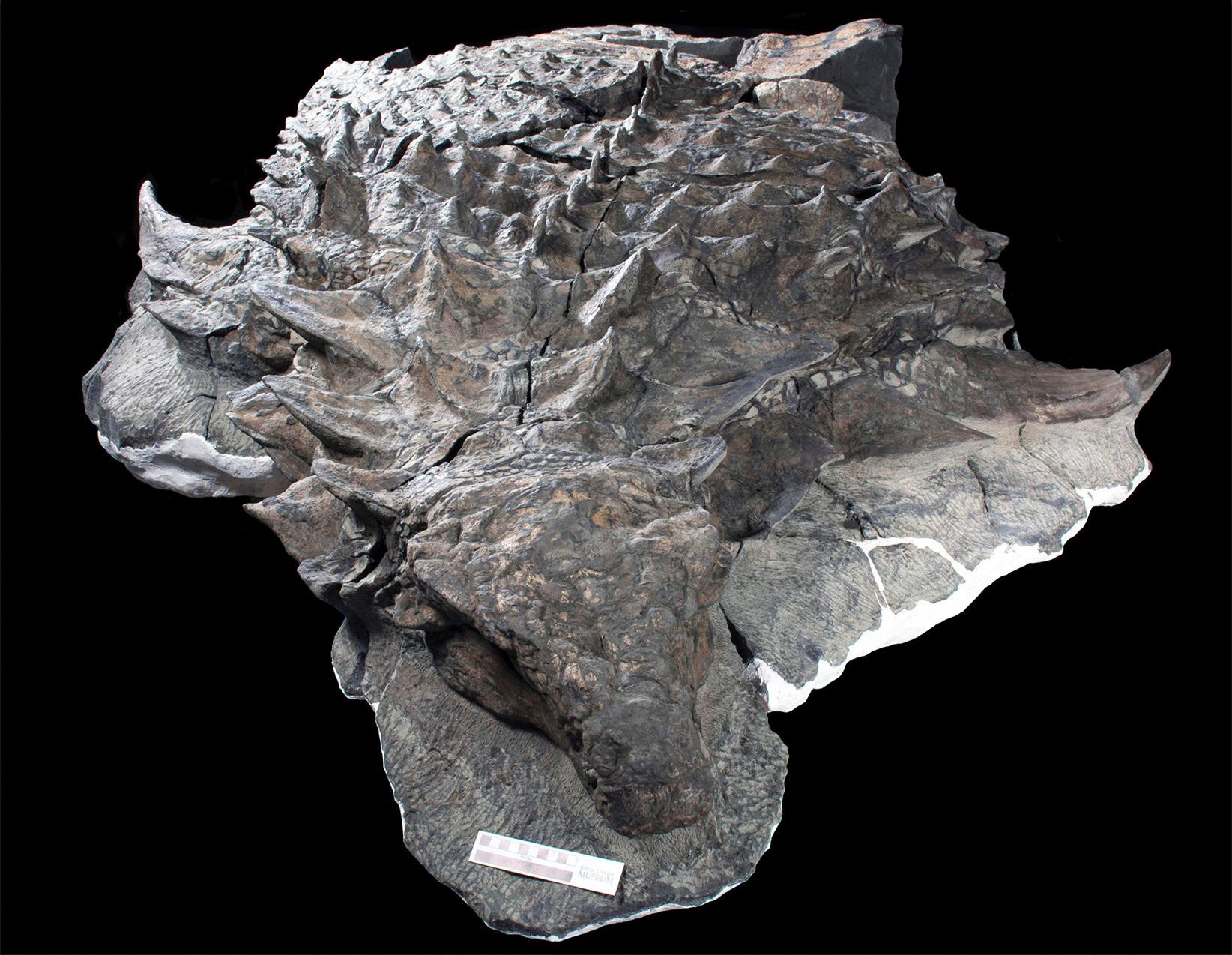 For more information on this subject, have a peek at the paper “An Exceptionally Preserved Three-Dimensional Armored Dinosaur Reveals Insights into Coloration and Cretaceous Predator-Prey Dynamics” as published by Cell. This paper was authored by Caleb M. Brown, Donald M. Henderson, Jakob Vinther, Ian Fletcher, Ainara Sistiaga, Jorsua Herrera, and Roger E. Summons. This paper can be found with code DOI: http://dx.doi.org/10.1016/j.cub.2017.06.071 right this minute.