This Apple event was about progress

This week’s education-focused Apple event was as much about who was on stage as it was about the subjects of which they spoke. Included were more women than men, three teachers and one former-teacher (also a woman of color,) and a whole lot of recognition of the efforts of teachers in general. This was a presentation for people.

Today’s Apple event was refreshingly diverse – a rather fair representation of the workers employed in the fields of relevance for the subject matter at hand. The event was about a new iPad. But more importantly, it was about education, and how the iPad fits in to a school setting, how the iPad’s worked for students before, and how it’ll continue to work in the near future.

Below you’ll find a list of people presenting at today’s Education event hosted by Apple. Here you’ll find an entirely fair representation of the English-speaking teachers of the world, of which there’s currently a majority of women.

The US Bureau of Labor Statistics reported that in 2017, of the 9,215,000 professionals in education, training, and library occupations, 73% were women. This same report clocked the following race percentages for the same employment category: 82% White, 10.7% Black or African American, 4.9% Asian, 10.5% Hispanic or Latino. More information can be found at BLS (GOV).

This event was about selling an iPad. It was also about presenting that iPad as a tool for all human beings to use to learn, to grow, and just plain have fun. In addition to the video above, the videos below were also shown. 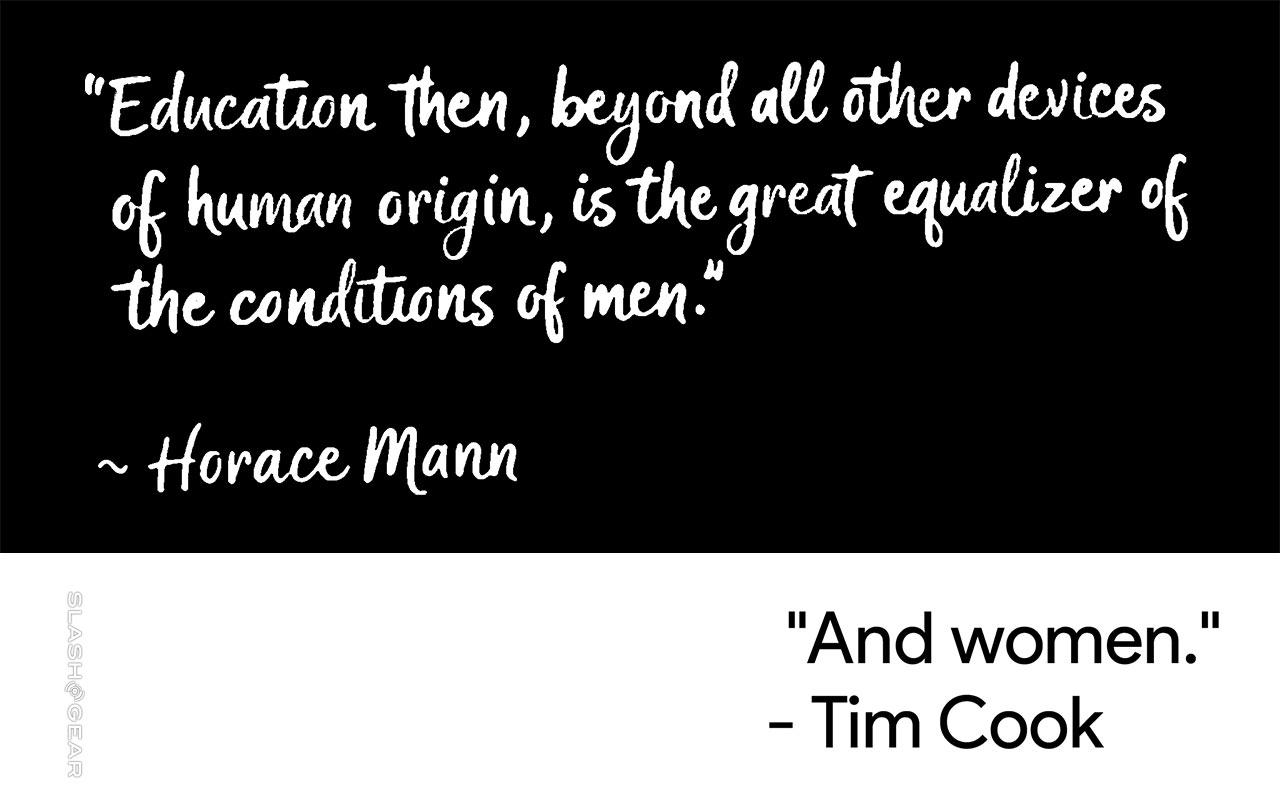 The following quote was shown onscreen at the event: “Education then, beyond all other devices of human origin, is the great equalizer of the conditions of men.” – Horace Mann. Tim Cook added “and women,” after the quote was shown. It wasn’t a lot, and ideally the setup and delivery would’ve been made by a woman, but it made a difference nonetheless.

This event didn’t deliver a complete smashing of any glass doors, windows, or ceilings, but it was a welcome change of pace, and maybe even a positive step toward a future with equality by default. In other words, well done, Apple. It was a good start.

SIDE NOTE: Tim Cook started this presentation with the following. “We’ve always believed that people with passion can change the world,” said Cook about the Gun Control marches that took place this week – aka the March for Our Lives.

“We are deeply inspired by the courage of students using their voices to bring about change in America.”