Amtrak has revealed an ambitious rail expansion map, responding to President Biden’s $2 trillion infrastructure plan with a “2035 vision” of how its service could connect more states and boost traveler numbers. The White House set out its goals for improving transit in the US earlier this week, including dramatically improving EV charger infrastructure and making long-overdue repairs and replacements to roads and bridges.

Established back in 1971, Amtrak currently serves 46 US states and three Canadian provinces, with routes running over 21,400 miles of track. Though managed as a for-profit organization, it’s fully owned by the US federal government through the Secretary of Transportation. It also receives a combination of state and federal subsidies for funding, in addition to ticket costs.

“Decades of declining public investment has left our roads, bridges, rail, and transit systems in poor condition, with a trillion-dollar backlog of needed repairs,” the White House said yesterday as it revealed the Biden Jobs Plan. Rail in particular was cited as a pain-point, with the DoT estimating it contributes to a repair backlog valued at over $105 billion.

“The nation’s rail networks have the potential to offer safe, reliable, efficient, and climate-friendly alternatives for moving people and freight,” the White House said. “However, unlike highways and transit, rail lacks a multi-year funding stream to address deferred maintenance, enhance existing corridors, and build new lines in high-potential locations.”

As a result, the plan includes $80 billion for making Amtrak repairs and modernizing its existing routes, in addition to building out new ones. 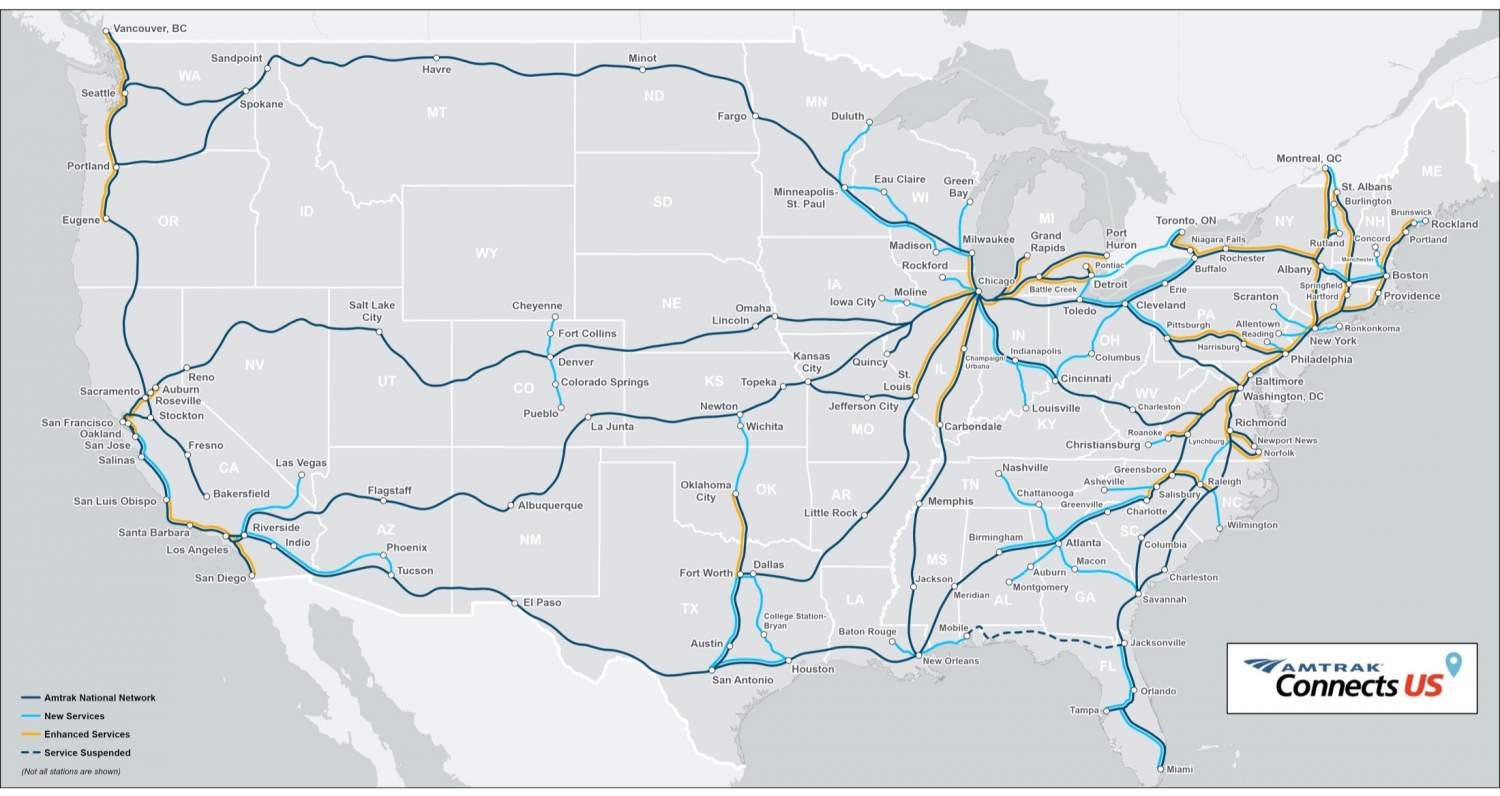 Unsurprisingly, Amtrak is gung-ho about that prospect. It’s published a new map showing just what it thinks could be achieved in the next 15 years, with the potential for over 30 new routes and increased service on more than 20 existing routes. Up to 160 more communities could be served – particularly those with large populations of people of color or economic disadvantage – with the goal of eventually adding 20 million more passengers to 2019’s 32 million passengers served.

“Major cities like Houston, Atlanta, and Cincinnati have service that is simply inadequate, with trains that only stop once a day and often in the middle of the night,” Amtrak points out about the current state of play. “Other cities like Las Vegas, Nashville, Columbus, and Phoenix” lack service altogether, the rail company added.

“President Biden’s infrastructure plan is what this nation has been waiting for,” Bill Flynn, CEO of Amtrak, said in a statement. “Amtrak must rebuild and improve the Northeast Corridor and our National Network and expand our service to more of America. The NEC’s many major tunnels and bridges – most of which are over a century old – must be replaced and upgraded to avoid devastating consequences for our transportation network and the country.”

Congress will vote on whether to approve the Biden plan and green-light the funding.