These Instagram filters as baby names are a growing trend

Yes, real human babies named after Instagram filters. The next generation of baby-makers really, truly have the power now. And they’re squandering it. Turning their children into photo filter names from an app. On the plus side, these names aren’t the most horrifying massacres of a set of baby names we’ve ever heard. But they’re not the best names in the history of the world, either. Can you imagine anyone making a large contribution to our society with a name derived from a photo filter? From a social networking app owned by Facebook?

The following names are surging in popularity for human babies according to BabyCenter.com: Lux, Juno, Reyes, Ludwig, Amaro, Valencia, and Willow. 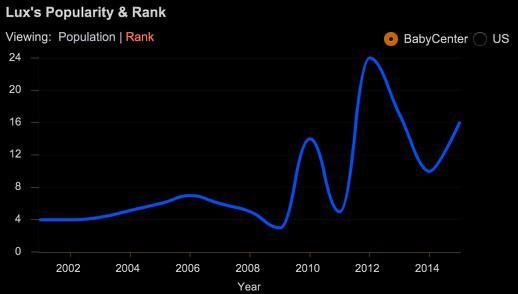 The rankings you’re seeing are based on BabyCenter’s database calculations as well as the US Government Social Security Administration’s public listings. Some of the newer names do not yet have any publicly available information from the US government, while some – like the name “Ludwig” is obviously an old name, and can be tracked back quite a few years.

You’ll see here how the name Ludwig, though also an Instagram filter, was once a rather popular name in the United States. Now that it’s returned to prominence – right at the same time Instagram was launched and took hold of the app universe – the name is growing in popularity.

The following names have jumped in popularity by the percentages you see near them since Instagram was first brought into popularity over the past several years.

Unfortunately the filters/human names Walden, Sierra, and Lark were all down in usage over the past several years.

People don’t like those filters, clearly. Not enough to name their babies after them.

Are you surprised by these developments? Did you expect that naming babies after photo filters would NOT be happening?