According to the NWS Weather Prediction Center, modeled by NOHRSC, we’re currently living in a historical moment. Or historical so far as the records go – back to only 2003. At 73% at Midnight on February 16, 2021, this is “the greatest extent on record in the database, which dates back to 2003.”

Above you’ll see the most interesting map gridded by NOAA this week. Here we see February 1-16 with a daily summed snowfall departure from the 12-year mean. Most of the United States has an extremely average snowfall right now (for this point in the year), or a significant number of inches above the average for the past 12 years. 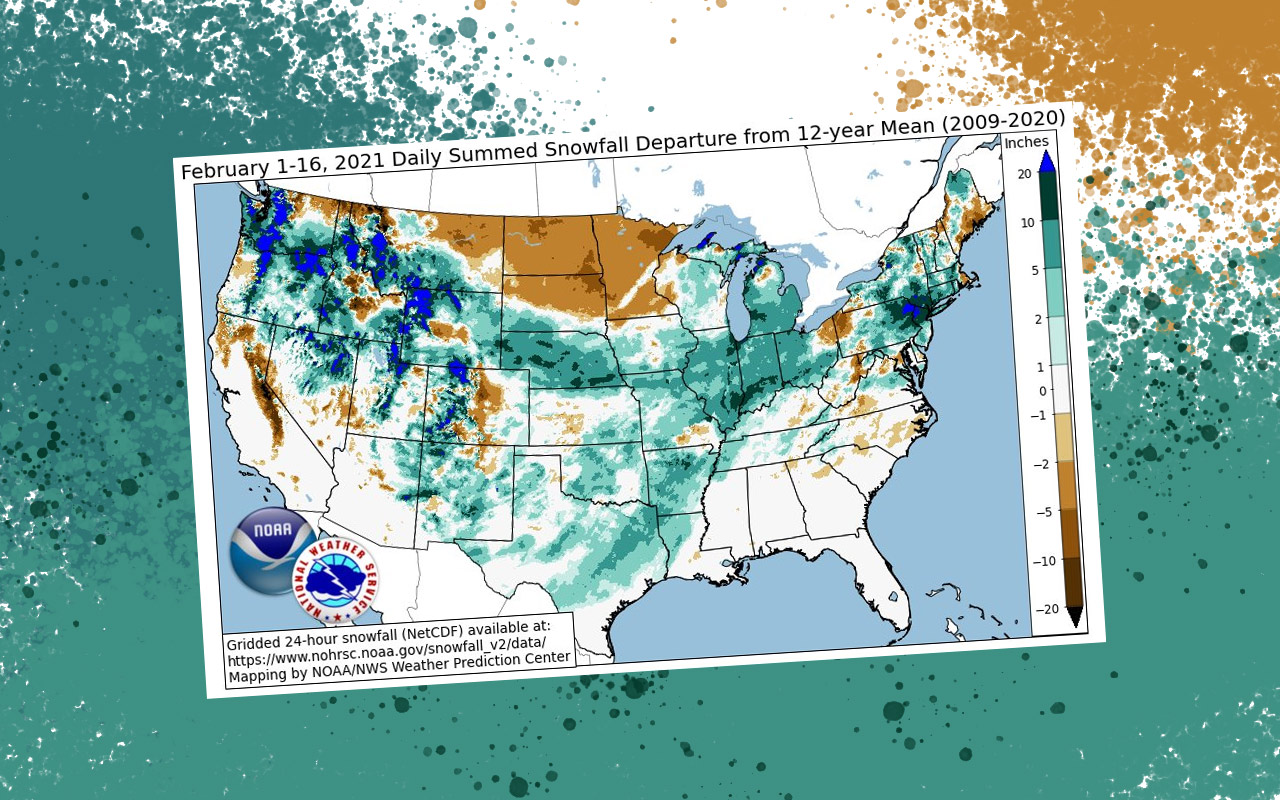 A great big slice right through the center of the United States has between 1 and 10+ inches more than they’ve had (vs 12-year mean). Some areas – especially those getting hit in the North-West of the USA – are getting 20+ inches more than what’s considered normal for this time of year.

For some areas, like Texas, even 5+ more inches of snow than normal can have a massive effect on the way daily life is lived. Take a peek at today’s power outage map and you’ll see a swoop in line with increased snowfall.* *NOTE: This is a very loose correlation, and not a case of definite causation. It’s not as if a few extra flurries were the sole reason some states are having power issues at the moment.

Meanwhile, areas like North and South Dakota, Minnesota, and a slice of California have had significantly lower amounts of snow fall in the past couple of weeks than they’ve had in the past 12 years. It’s cold here, but we’re not snowed in!

Snow depth across the United States as of February 17, 2021 is an average of 6 inches. Reports from across the USA suggest that some areas have had some of the most intense snowfall they’ve seen in years. South Haven, Michigan (station MI-VP-14) reported 50 inches of snow in a 24 hour period. That report was made at approximately 13:00 on the 16th.

If you live in Milan, Tennessee, you’ve had a reported 34 inches of snow in the past 24 hours. Little Rock, Arkansas had a reported 45 inches of snow in 24 hours. Meanwhile North Dakota, a state you’d expect to have a whole lot of snow at any given moment, has less than a foot of snow on the ground and less than a food of snowfall in the past day.

Above you’ll see an animated look at snow depth as recorded by NOAA over the past couple of weeks. Snow gets pretty wild, really quick!