To see the current server status of Google’s side of the equation, head over to Google Cloud Platform. There you’ll find that Google’s “Google Cloud Global Load balancers” had issues earlier today. Those issues nudged me toward creating the article you’re reading now.

Every Google service also – obviously – runs on a Google server. That includes Gmail, Google Maps, Google Calendar, Google Assistant, Google Play, Google Drive, and others. ALSO OF NOTE: Apps and services listed above and below do not necessarily rely on Google or Amazon services for any cloud computing or server service 100%. Some do, as evidenced by today’s outage. But not all.

For Amazon there are too many companies to list. Amazon AWS all but corners this market for multiple services, working with everyone from Expedia to General Electric and back again. I picked some of the companies most readers will recognize for the following list. A WHOLE lot more can be found at Amazon AWS case studies. 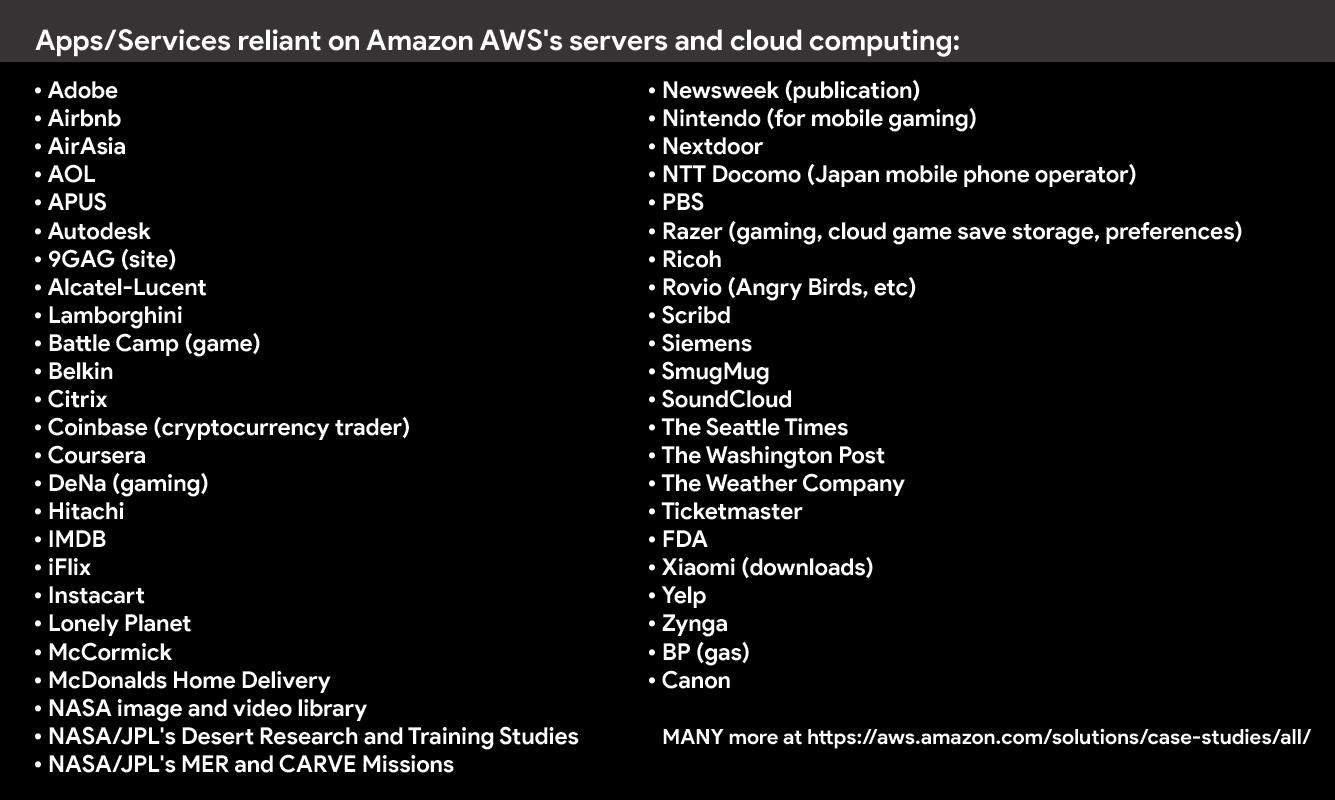 Amazon AWS also provides IT and server support for some small cities. The city of Asheville, North Carolina relies on Amazon for its disaster recovery (DR) solution. “By using AWS, the city no longer worries about the risk of not having the necessary IT infrastructure available to support data recovery and critical IT systems during an event such as a hurricane.”

The city of McKinney, Texas relies on Amazon to host and run land-management and records-management systems. As Amazon suggests in their case study, “the city’s IT department is going all-in on AWS and uses the platform to run a wide range of services and applications.” Amazon’s got these cities rolling right.

It would appear that Amazon AWS and Google Cloud Platform have their ducks in a row, for now. But when these servers go down, they go down hard, and they take big hunks of internet down with them. Have a peek at Amazon AWS outage means the internet is down. And if you need any convincing that Google and Amazon, but mostly Amazon AWS run the world, think about the following.

If Amazon AWS went down completely, right now, we could potentially lose access to Netflix, Hulu, and Amazon Prime Video all at once. No more streaming video for ANY of us. Oh and Alexa would be down too, obviously. It could be absolute chaos – cross your fingers it’ll never come to be.