This week amid rumors of a Christmas event OR New Years Eve week event – or both – Pokemon GO has been updated. This update isn’t exactly what we’ve been crossing our fingers for, mind you – but it’s always nice to see something new. This update has more going on behind the scenes than it does up front – up front, and perhaps most importantly, Niantic has fixed the buzzing bug.

Vibration feedback has been buzzing smartphones for over a week in Pokemon GO. Not when Pokemon have popped up within range, as it’s supposed to, but for reasons unknown. It would appear that Niantic has fixed the problem for now – even though we’re still pretty sure these are the phantom heralds of Pokemon Gen 2 monsters.

This update is also bringing on a collection of code not yet activated. One of these bits in the code – but not yet live – is a set of holiday presents. Christmas Presents, one might also wish to call them. In the code they go by the name “Holiday Items” – in direct relation to the Shop. What does it all mean?

The boxes appear in the latest update to the game in the game’s APK files. These files show six different tiers of gift – all of which are appearing with the same basic size ratio. Tiers start at a sort of Bronze color, move on to silver, gold, Special, Great, and Ultra.

What will these boxes contain – that’s the big question here. And what will Niantic reveal in the next couple of days? They’ll have to start announcing something real quick if they’re going to make something public before a holiday event begins. Unless our previously stated information (from our anonymous source, linked to the right) remains true.

The first announcement timing has passed. One of two options for Niantic this holiday season was to announce a Christmas event on Monday (the 19th of December) and run it starting Wednesday. If Niantic is indeed moving on to their second option, the next announcement will come either Wednesday or Thursday.

The next Pokemon GO event would then begin on the 25th of December and run through the rest of the week – counting down the days until the new year! This would allow one special Holiday Present to appear each day for each player. Here’s crossing fingers that they’ll have a new Pokemon hidden within their wrappings!

UPDATE: Each gift will bring something fabulous (like a free egg Incubator) in the store, once per day for several days in a row. Togepi and Pichu will be amongst the (newest) Pokemon that’ll be more common in eggs this week. As such, the free Incubators that’ll come early on will be most welcome! 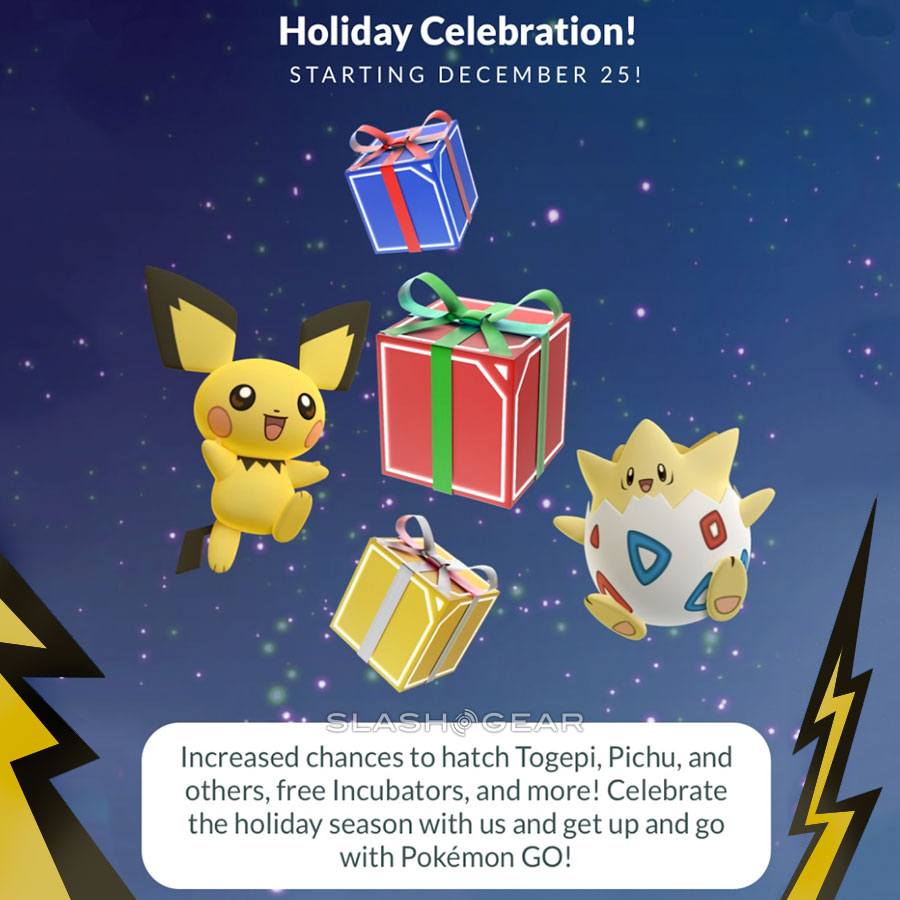 Also in the update is mention of the Apple Watch update which is not yet live as of the publishing of this article. Niantic recently suggested they were still hard at work making Pokemon GO with the Apple Watch and the proof is now officially in the pudding. When this will appear in live code is not quite known as yet. UPDATE: The Apple Watch addition to Pokemon GO is now live, on Christmas weekend, 2016.

UPDATE 2: Additional clarification has been revealed!