McLaren promised something extravagantly impressive for its first series-production High-Performance Hybrid supercar, and the new 2022 McLaren Artura certainly fits that description. A long list of “firsts” for the British automaker, the Artura combines a plug-in hybrid drivetrain with lashings of superlight materials and an unexpected strength in fuel economy, for what’s shaping up to be a thoroughly modern interpretation of the supercar.

This isn’t, of course, McLaren’s first hybrid. The company has prior form, in the shape of the P1 for example, but its previous gas-electric efforts have all been highly limited-run examples of true performance exotica. The Artura, in contrast, is designed for as “mass production” as McLaren gets.

The key is the entirely new drivetrain. On the one hand, there’s a new twin-turbocharge 3.0-liter V6 gas engine; it’s combined with an electric motor and a new, particularly energy-dense battery pack. The result is 671 horsepower and 531 lb-ft of torque. 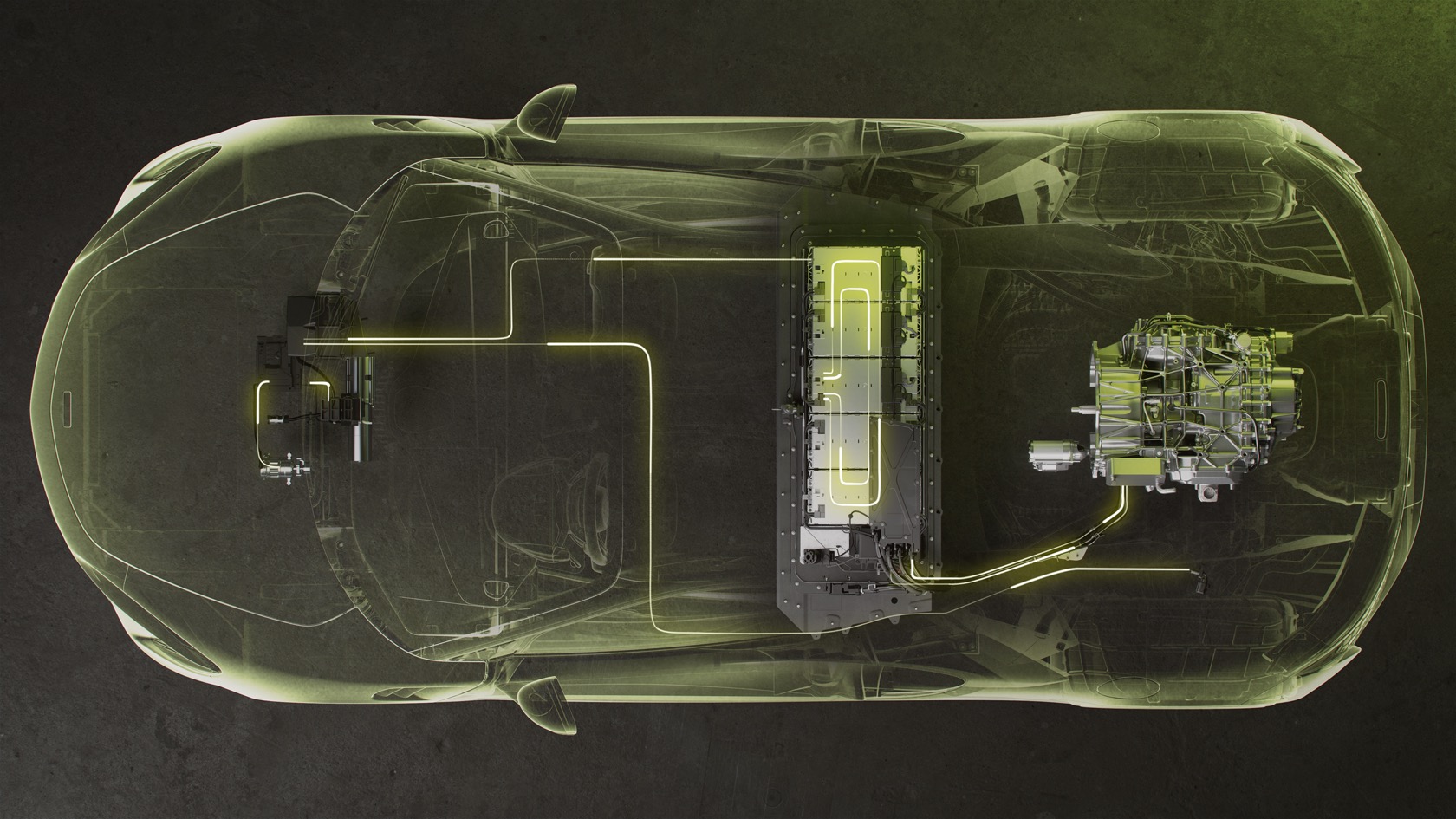 McLaren says the Artura can do 0-60 mph in 3.0 seconds. 0-124 mph is a mere 8.3 second blast, while 0-186 mph is just 21.5 seconds. Top speed is electronically limited to 205 mph. Just as important, though, is how that power is delivered: 166 lb-ft of torque comes from the e-motor from the instant you hit the pedal, for what the automaker boasts is its “sharpest-ever throttle response.”

It’s also, of course, a plug-in hybrid, and that comes with some economy advantages. You might not think of frugality as being a selling point for a supercar, but McLaren says the Artura should be able to do 50+ mpg on the WLTP test cycle. Its 7.4 kWh battery isn’t the largest out there, but it’ll still be up to doing 19 miles of electric-only driving; again, those are WLTP figures, and we’d expect EPA range to be less. 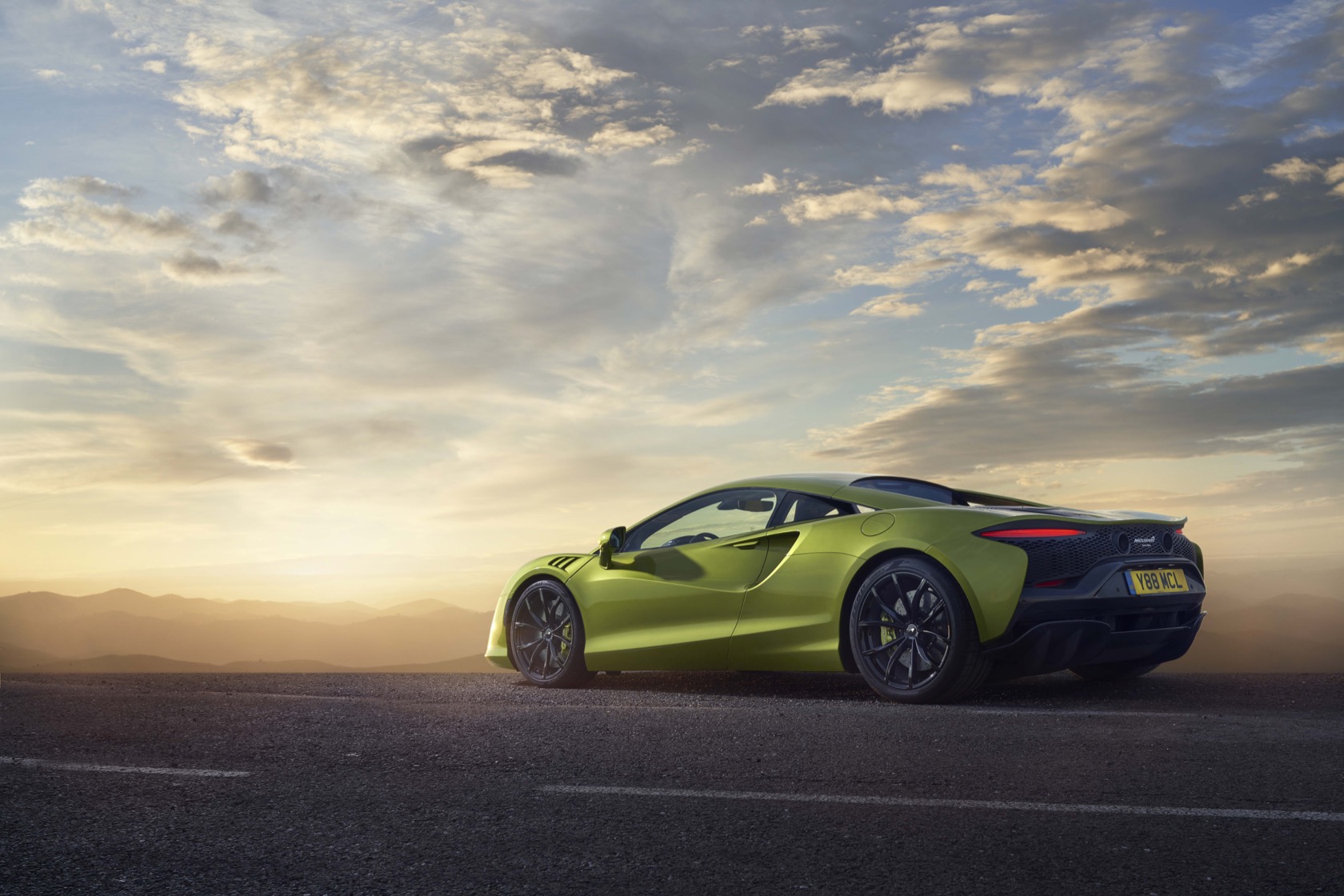 The new drivetrain is mounted to a new eight-speed transmission, with McLaren’s first use of an electronic-differential. There’s an engine disconnect clutch and no traditional, mechanical reverse gear: instead the e-motor simply spins in reverse when you need to go backwards.

With a Level 2 charger, you’re looking at up to an 80-percent recharge in 2.5 hours. Of course there’s also regenerative braking, too, the performance of which is adjusted by the drive mode. Despite the power, and the battery, and the e-motor, the dry weight is just 3,075 pounds. That, McLaren points out, is about what some of its gas-only rivals tip the scales at. 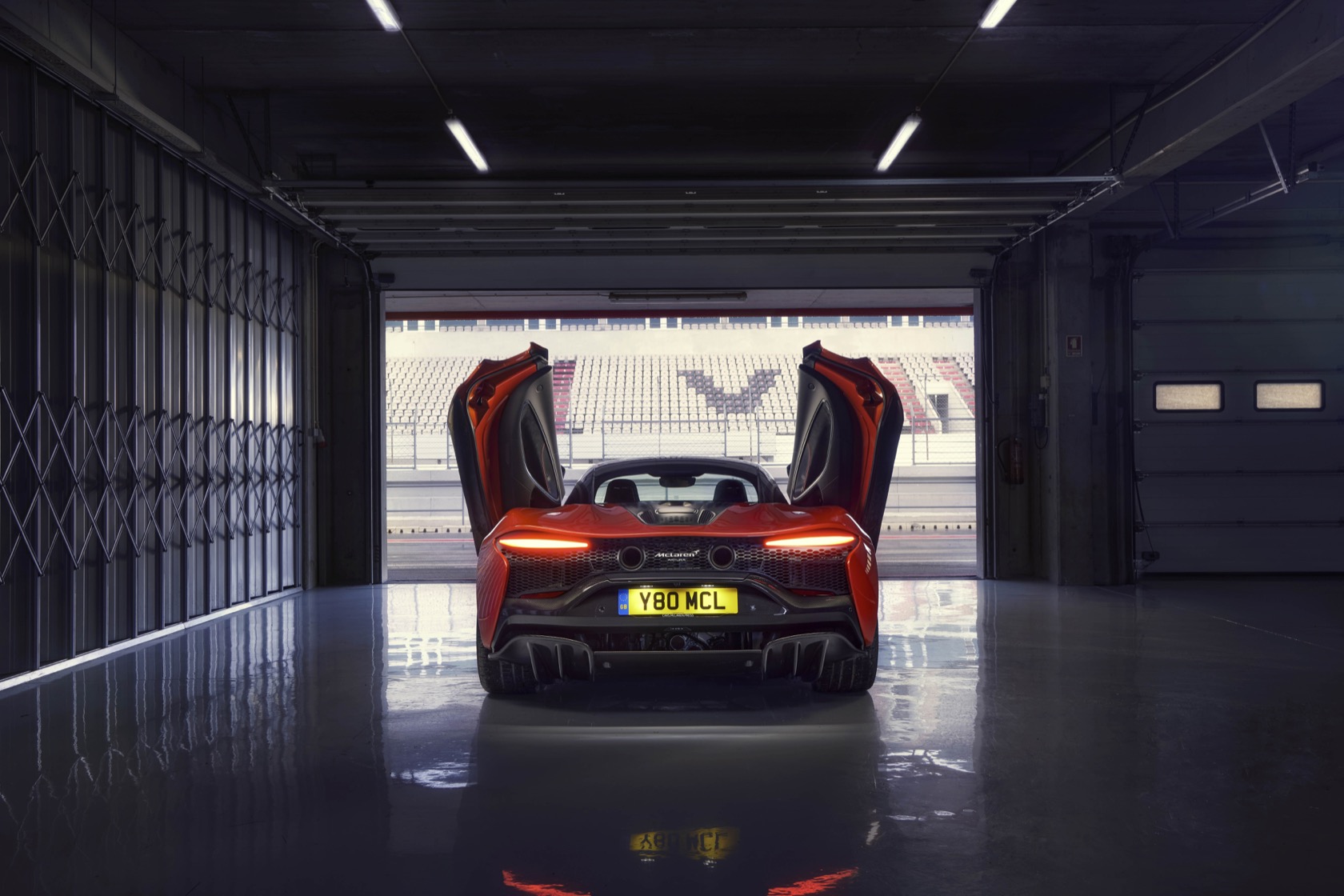 Helping there is the new McLaren Carbon Lightweight Architecture (MCLA). An in-house design, and built at the company’s specialist McLaren Composites Technology Centre, it not only delivers strength at low weight, but has hybridization baked in from the start. As well as a special battery compartment for the refrigerant-cooled li-ion pack, there’s also a new domain-based ethernet architecture that the automaker says is faster, allows for modern ADAS like intelligent adaptive cruise, supports OTA updates, and also trims cabling by up to 25-percent. 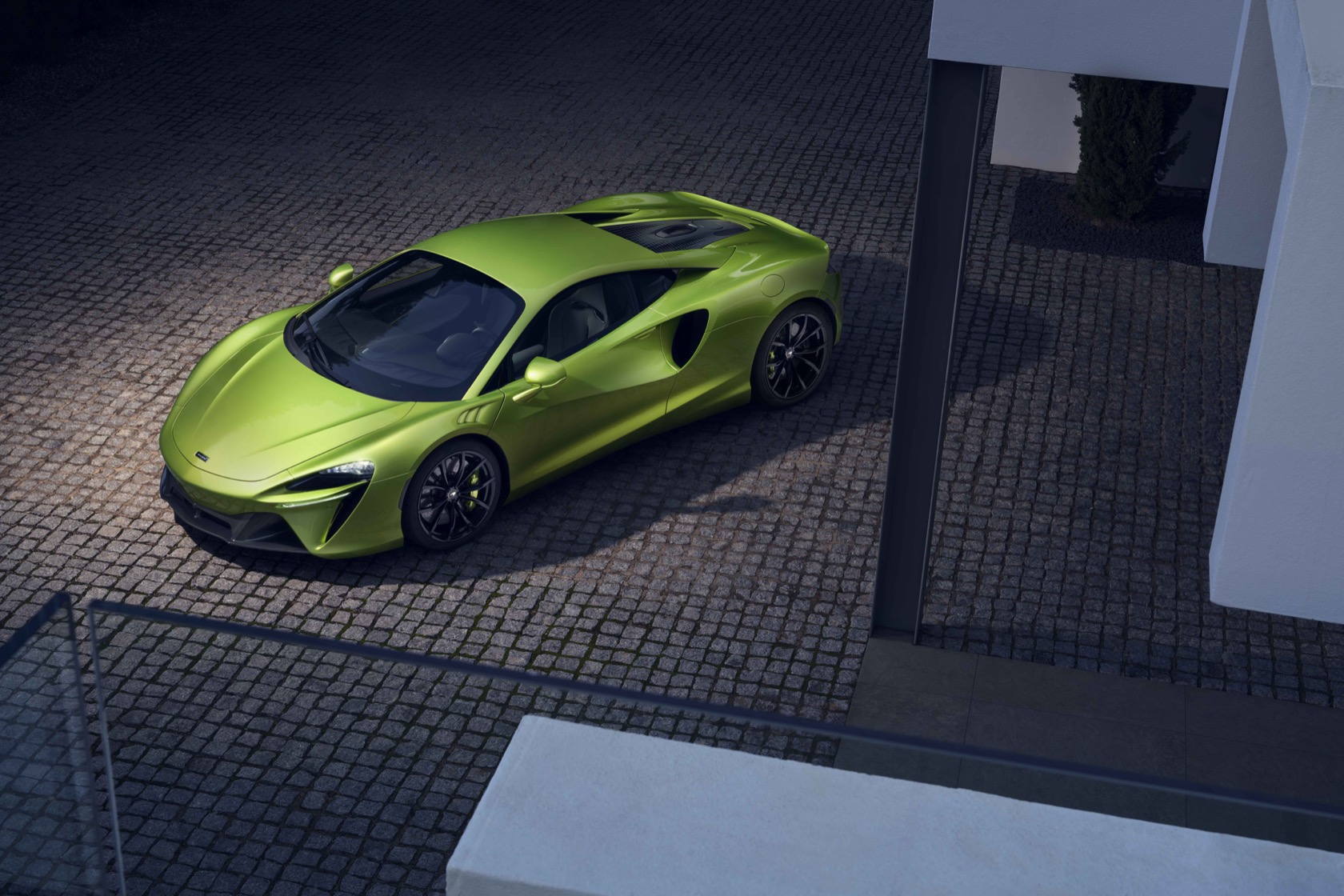 As for the design, that’s a blend of familiar and new. Low nose, the cabin pushed forward, and with a high tail, it features McLaren’s iconic dihedral doors. They open closer to the body, now, and have tighter-folding mirrors. Minimal shut-ins and panel joints have been permitted by producing much of the bodywork as a single piece: the entire rear clamshell, for example, is just one component. 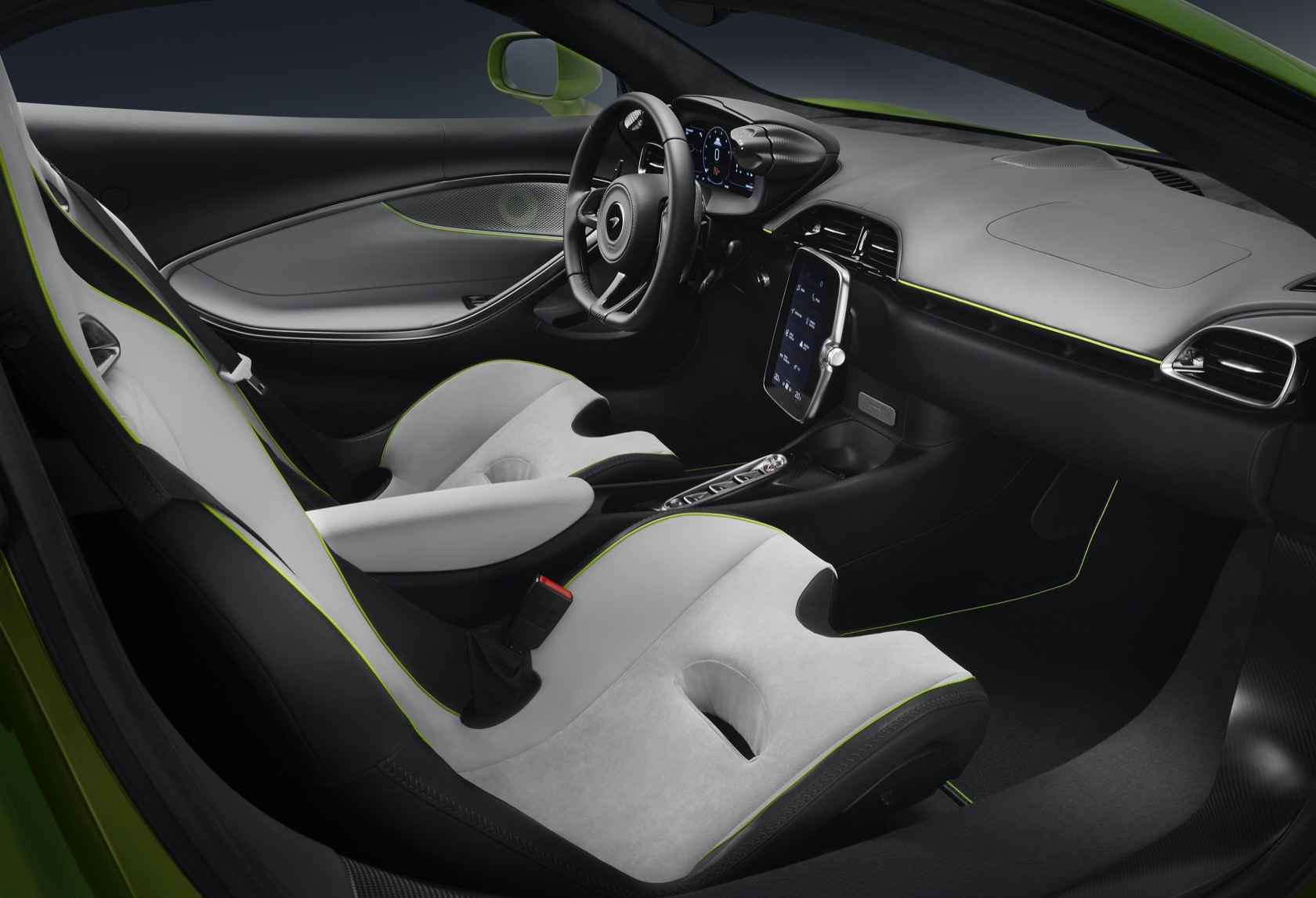 Inside, there’s a new cabin aesthetic. McLaren’s familiar driving mode selection – which splits out Powertrain and Handling adjustments – is now moved to the instrument binnacle, which is mounted on the steering wheel. There are four modes: E-Mode, Comfort, Sport, and Track, with varying degrees to which EV power is used. In Comfort, for example, driving under 25 mph is done on electric power if possible; in Track, the e-motor is used for torque infill for low-end grunt and during gear changes. 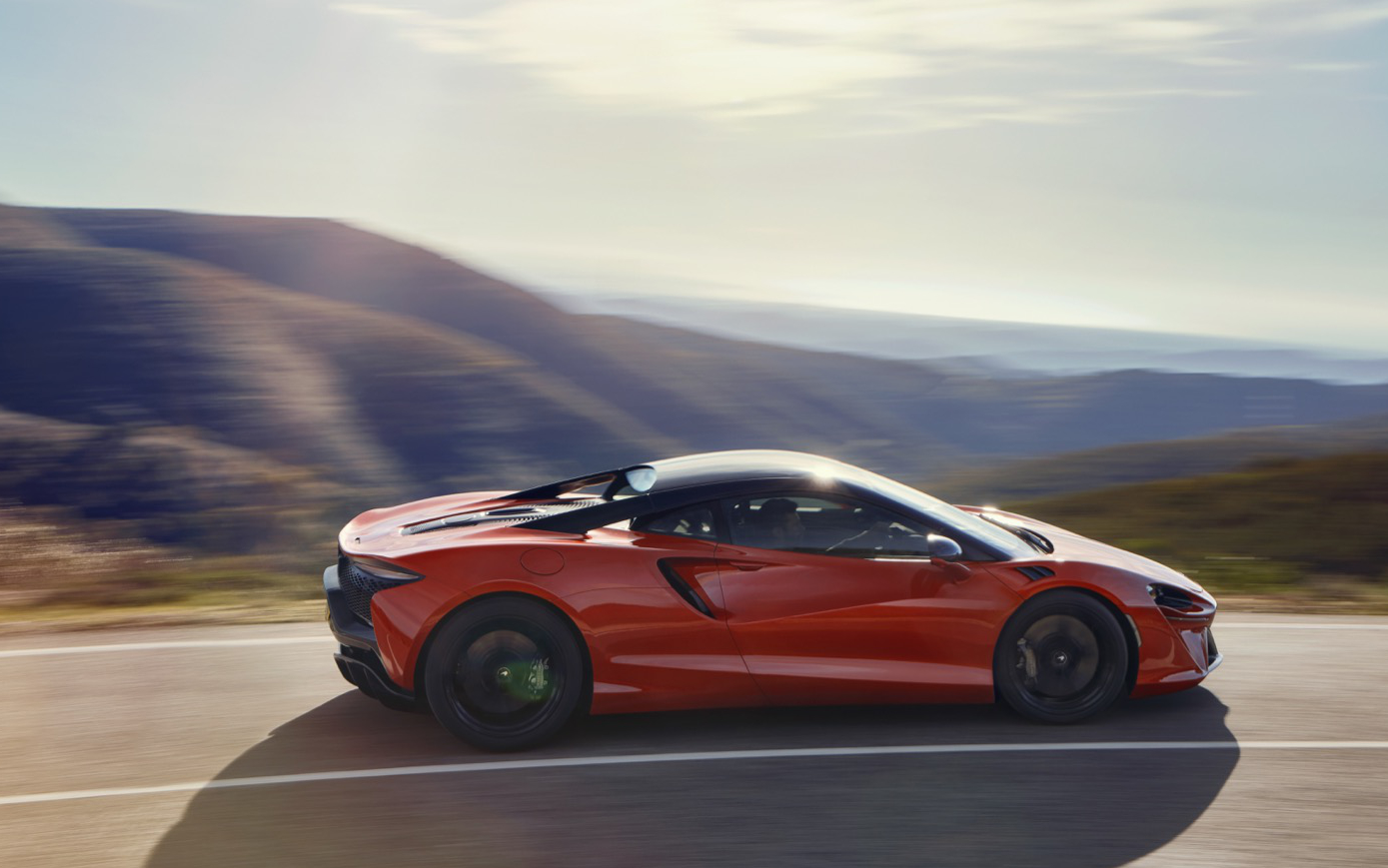 The E-diff shifts torque from left to right across the rear axle, but is much smaller than a mechanical differential. A new rear suspension system, meanwhile, has a top upper wishbone with two lower links and a tie rod; it also helps allow for wider tires. Pirelli Cyber Tyres are standard, with integrated chips to feed real-time performance data to the Artura’s systems.

To that, McLaren has added some of its most-beloved features. That includes hydraulically-assisted steering and a new version of the Proactive Damping Control; there’s also carbon ceramic brakes and lightweight aluminum calipers, as featured on the most recent LT models. 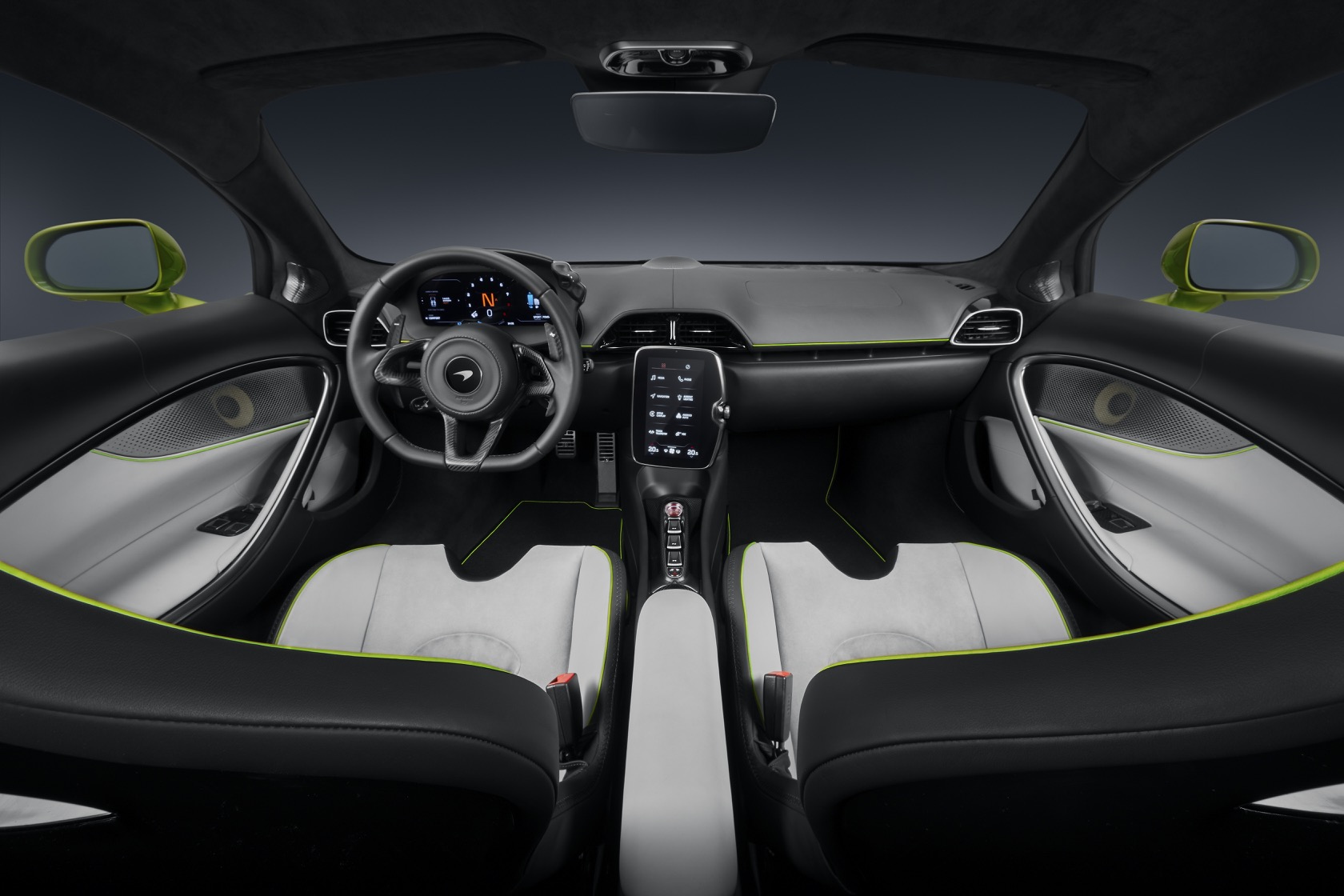 Fitting with the McLaren ethos of a supercar you can drive daily, US-spec cars will get power adjustable and heated Comfort Seats as standard, and the automaker says that even 6ft 4 drivers should have room to spare. Two high-definition infotainment screens feature all-new software, with Apple CarPlay and Android Auto support, track telemetry and Variable Drift Control apps, a new binnacle navigation display, and a stealth mode that trims the data presented down to a minimum. A Bluetooth key is used, while Clubsport bucket seats are optional.

In short, it’s a McLaren, but not as we’ve seen before. Sales of the 2022 Artura are kicking off from today, with deliveries from Q3 2021. Pricing begins from $225,000, including a Practicality Pack that adds vehicle nose lift, power folding and heated door mirrors, soft close doors, and Homelink. A Performance spec will have a more functional, sporting aesthetic; a TechLux spec will focus on technical luxury; and finally a Vision spec will be “more avant-garde” according to McLaren.