NASA’s new Mars 2020 rover has finally got its wheels, with the countdown to blast-off now only twelve months out. Handiwork of the Jet Propulsion Laboratory in Pasadena, California, the Mars rover is expected to join Curiosity on the red planet and pave the way for an eventual manned mission there.

That’s a lot of responsibility resting on the little rover’s metaphorical shoulders, so thankfully its suspension is up to the task. It’s an unusual arrangement, designed to maximize articulation while also reducing complexity and weight. NASA also made sure it would help avoid the Mars 2020 rover tipping when at extreme angles.

So, each leg has multiple pivot points and struts, eventually connected to six wheels: three on each side. The legs are made of titanium tubing – similar, in fact, to how high-end bicycle frames are manufactured – while the wheels are aluminum. Each is just shy of 21-inches in diameter.

Rather than rubber tires, however, they’re each machined with 48 cleats, or grousers. That gives maximum possible traction on both the soft sand and harder, rocky terrain which NASA expects the rover to have to deal with on Mars. Each is independently motorized, too, so can turn forward and back. 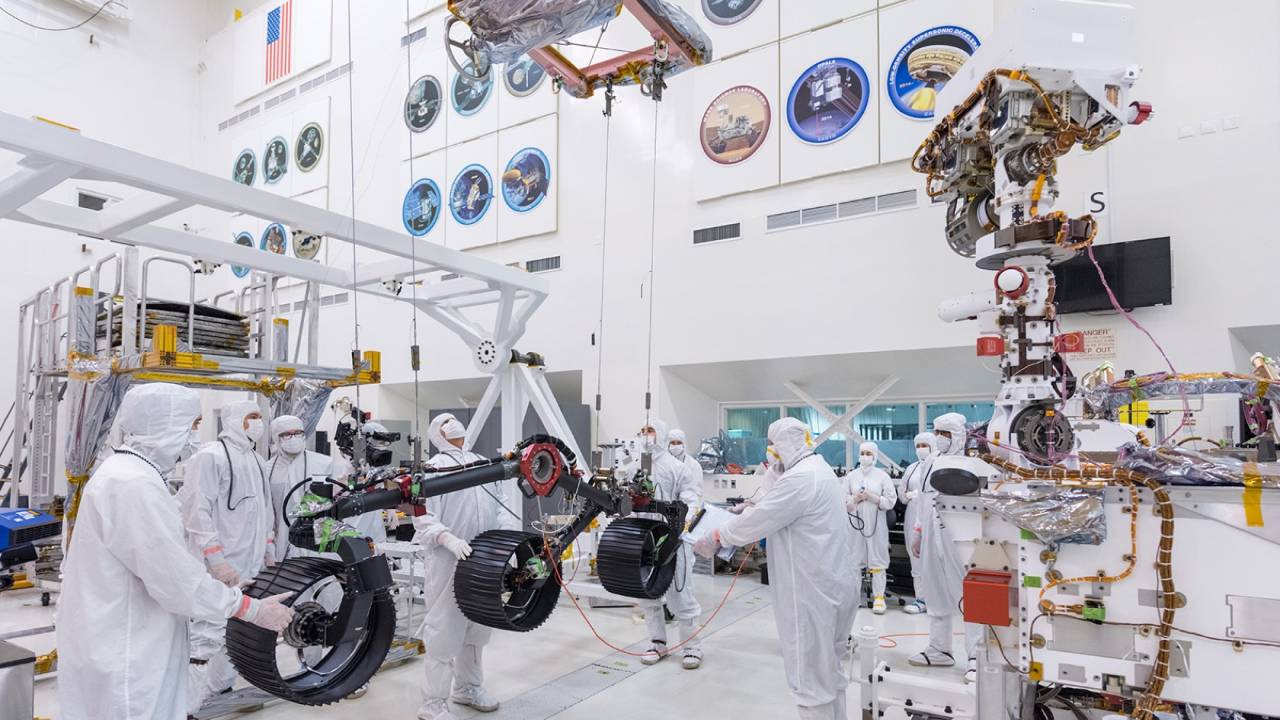 As for steering, the front pair and rear pair of wheels have their own steering motors too. It means the rover can spin 360-degrees on the spot, if required, handy for navigating through tight spots.

For this most-distant of off-roading, NASA and the JPL are leaving nothing to chance. The articulation of the suspension system is designed to allow each wheel to move pretty much independently, spreading the rover’s weight equally across all six, and keeping the body as level as possible. Operators aim to avoid any inclines of more than 30-degrees; however, NASA says the rover can handle 45-degree tilts in any direction, without toppling over.

As for dips, the clever suspension configuration allows the rover to make it through holes the size of its wheels. That’ll be vital for keeping it from getting bogged down.

Next up comes the real reason for the rover’s presence on Mars: its tools. They’ll include a robotic arm along with a Sample Catching System, the latter a 17-motor affair designed to gather up samples of rock and soil that, NASA hopes, can be returned to Earth on a later mission. It’ll also get its SuperCam instrument, which will be mounted on a mast atop the rover.

While this is the first time we’ve seen the Mars 2020 rover with its wheels in place, these won’t actually be the ones it goes to the red planet wearing. Instead, NASA will replace them for so-called flight models next year, closer to the planned launch. That’s expected to take place in July 2020, from Cape Canaveral Air Force Station in Florida, the start of a long journey that won’t see the rover arrive on Mars until February 18, 2021.

Even that will be a fraught process. The plan is to lower the Mars 2020 rover down to the surface of the planet using a record-breaking parachute, which will deploy in fractions of a second.