If you’re looking for an honest deal with a man who makes it his mission to connect to the consumers of the media he produces – and you love blood-filled effects-driven films, of course – RZA’s “The Man with the Iron Fists” release package will be right up your alley. This movie is going to be out on November 2nd, and according to RZA, the simple blacksmith that takes on evil with his own metalworking skills creating a weapon not only inside the film, but out here in the real press-driven film industry. If you head to the IronFists.com release site for the film, for example, you’ll find complete Release Notes with more details than you could possibly need to explore the upcoming epic.

This film promises to take the theater with film quality not unlike that of Quentin Tarantino’s “Kill Bill” series with RZA and Eli Roth at the helm. As RZA makes clear, “Hollywood don’t put out these kind of movies, kid. If you want a karate movie, you gotta go get a subtitle joint. This is English speaking with Oscar-winning actors in it.” A mix-up of the quality that comes with the top-brass from Hollywood, that is, with an energy only otherwise found in the best of the best in international kung-fu productions.

You can see RZA speak on the movie briefly in the interview series shown above, hosted by hip-hop legend Funkmaster Flex and working with the director / rapper / producer to reveal not just the ingredients that make the Iron Fists movie possible, but what made the Wu-Tang Clan what it is in the music industry as well. RZA was one of the founding members of that hip-hop / kung-fu fusion group, if you did not know, and it’s from that media staple that the artist has been able to blossom in the film universe. 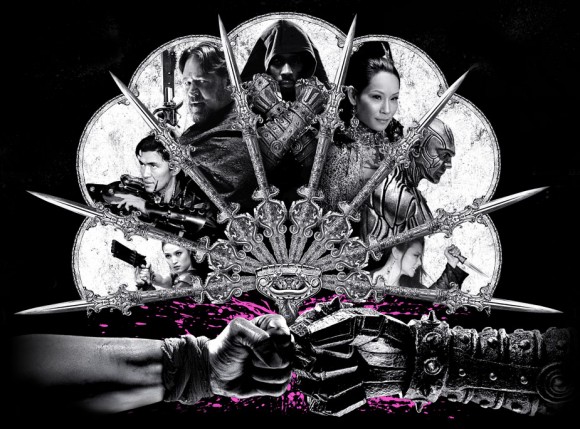 The Iron Fists movie will be rolling out with superstars such as Rick Yune, Jamie Chung, Cung Le, David Bautista, Byron Mann, and Gordon Liu. With Liu you’ll start to recognize stars from Quentin Tarantino films, Pam Grier, Joe D’Augustine (film editor), Lucy Liu, and Yuen Woo-Ping. This last entry in the star-studded crew was also the fight choreographer for such beastly films as Kill Bill (1 and 2), The Matrix, and Crouching Tiger, Hidden Dragon. Russell Crowe is in the film as well – certainly an audience grabber.

This film will work with characters such as Bronze Lion, Brass Body, and the Blacksmith, so you know it’s going to be a heavy metal sort of party, but the base here is hip-hop. Expect the visual effects that make Brass Body (David Bautista) into a real metal-skinned warrior to be complimented by the musical talents of RZA, the Wu-Tang Clan, Wiz Khalifa, The Black Keys, and and Kanye West. Expect eyes to be flying out of the faces of fighters and blood to cover the walls, also.