In some respects, the iPad mini was a disappointment. Despite the hour’s worth of hyperbole at Apple’s press event, the tablet itself was an exercise in parts bin engineering – the processor from an old iPhone, the screen resolution from an old iPad – without the game-changing element that (yes, whether innovation or derivation) has punctuated Cupertino launches of before. Yet, despite more powerful, or pixel-dense, or flexible rivals beside it, the iPad mini has quickly become my go-to slate. The reason behind that is the hardest to quantify and yet, perversely, may be the most important for why we choose the devices we reach for. Science fiction has a lot to answer for, at least for my expectations of tablets.

Some sort of thin, highly portable slate appears in most sci-fi franchises, and we don’t generally concern ourselves with whether Picard is an iOS or an Android user. Star Trek’s generic PADD (“Personal Access Display Device”) is the default example; not for nothing are the physical computing interfaces used in sci-fi super-author Iain M. Banks’ Culture novels described inexplicitly as “screens”, their names boiled down to the core of their purpose.

Regular people aren’t particularly bothered by platform wars, they’re more interested in what a device can do for them. Like the characters in the post-cornucopia world Banks describes, it’s convenience that triumphs over OS affection. Which device is the first you reach for when you need to check Facebook, or Twitter, or your email.

It’s easy to lose track of “normal” users. That’s not even drawing a line between the tech enthusiasts who write device reviews and those who read them; it’s the gaping chasm between that cohort and their more sanguine counterparts in the mass market. Users for whom the “appliance” aspect of a tablet is entirely in keeping with the manner of its daily use: it must do its job, predictably, when picked up; offer sufficient multimedia, apps, and content to warrant having it in the first place; and – arguably most difficult to achieve – be something those users want to pick up in the first place.

The iPad mini grows on you because it ticks that final, core box with aplomb. Early reviewers fought bitter battles with those who had only seen the smaller iPad on their computer screens, desperately attempting to put into words and photos and video what comes down to a visceral reaction around a lissom slice of metal and glass. It embodies that science-fiction fantasy of a wireless window into the digital world. 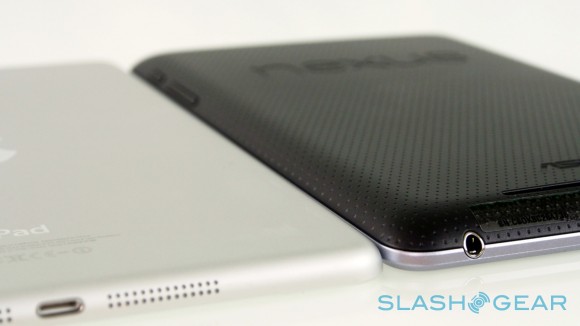 In contrast, Google and ASUS’ Nexus 7 – which I have, and which I love, and which I have suggested to many as an ideal, affordable tablet – sets out its stall at the budget end of the market, and in doing so sacrifices the just-rightness of feel in your hand. The compromises Google and ASUS made in design and materials, though no less valid for their intended purpose than the decisions Apple came to in creating the iPad mini, leave me reaching for the iOS model first when functionality could be served by either.

Ironically, perhaps, Samsung actually got there first with the Galaxy Tab 7.7, but failed over pricing. The 7.7-inch tablet was quietly replaced earlier this year by a more inexpensive alternative, Samsung having discovered part of what stopped Apple from using Retina: that a small, high-resolution, high-quality display looks great, but few people will actually pay for it. For the Galaxy Tab 7.7 specifically, its 1280 x 800 Super AMOLED HD panel and slick metal chassis were simply too rich for most buyers’ wallets, especially given Verizon’s $500 on-contract pricing for the sole model officially offered in the US.

Could Apple have launched the first-gen iPad mini with Retina? Marco Arment has said better than I could the challenges Apple faced had it tried to squeeze Retina resolution into the tablet. As he concludes, the final product – while it may have delivered that all-important pixels-per-inch figure – would have been a more meager offering overall, with varying degrees of sacrifice in battery life, bulk, and price.

Is it shallow to value the aesthetic and its approachability even when it comes at a price, whether that be in purely financial terms or in specifications? Maybe, and yet to some extent we all do it and thus it is a valuable metric in itself (or perhaps we’d all be using command line interfaces on clunky beige boxes rather than MacBooks, VAIOs, and whichever ultrabook is flavor of the moment). This isn’t a level playing field; not all things are equal. Not everybody has more than one tablet within arm’s reach. Not every app we simply must have access to is available on every device. Personal taste and platform loyalty often trump more rational decisions based on need, and budget, and what “does the job.”

I’m not saying the iPad mini is the best tablet out there. “Fit for purpose” means different things to different people; if you’re a gamer, or want to watch HD video, or do multimedia editing on your slate; or, if you need direct compatibility with Office, or the usability of a keyboard developed hand-in-hand with the tablet hardware itself; then there are alternatives more suited to those needs. But, with all that said – and here perhaps Apple should worry, as since its “cheaper” tablet arrived, I’ve hardly reached for the full-sized iPad 3 that sits on the shelf beside it, another victim to ease-of-use and hand appeal – the iPad mini has become the most used of the tablets I own.