The Impact of the Verizon iPhone on Android’s Growth

Typically after press conferences I attend or when major industry announcements happen, I take a lot of questions from the press asking my opinion on the news. I’m always happy to speak with journalists on stories they are working on and provide them a quote. As a professional analyst, this is part of my job.

Yesterday was no exception. After the Verizon iPhone launch press conference I spoke with a number of folks in the press, and one question in particular came up which I thought required further analysis. That question was what impact would iOS’s presence on Verizon have on Verizon’s current and future Android devices.

This is a question I have been asking myself for some time, and I felt it would only be answered when the iPhone was available on the two largest US mobile carriers, AT&T and Verizon.  In fact I’ve been wondering for some time whether Android would be experiencing such growth if the iPhone had got to Verizon sooner.  Although it is still too early to fully answer my first question, I feel we have some key data points that may present themselves and give us some signposts pointing us to the answer.

Data Point #1
Let the graph below function as exhibit 1A. What you are looking at is the number of iOS to Android users as the whole of smartphone owners on AT&T. What this graph points out is that for every one Android smart phone owner there are 15 iPhone owners. So on AT&T the evidence is clear: their customers prefer the iPhone over Android. Will the same be true on Verizon? 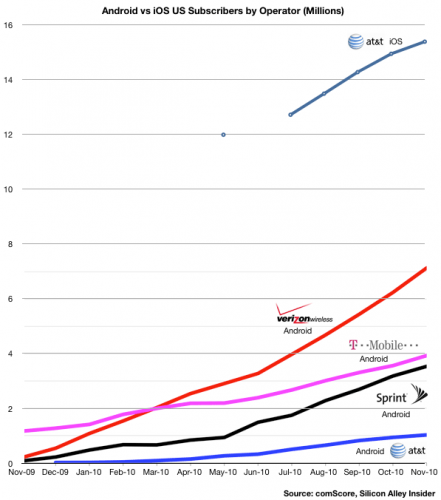 Now, some will argue that the AT&T had first-mover advantage with the iPhone therefore it is the smartphone that defined and grew the category for AT&T. That is true. However, it is still moot given that Android devices have been present on AT&T for some time and still people overwhelmingly prefer the iPhone to Android on AT&T.   You may also argue that AT&T’s Android lineup has been less than impressive and you will be correct.   Verizon has a very strong and competitive Android lineup which is what makes this question fascinating.

Data Point #2
It will be important to note for the sake of this discussion the number of smart phone subscribers as a whole on both networks. Excluding RIM and just looking at total iPhone and Android smart phone subscribers, the latest numbers I could dig up were AT&T having 16.5 Million and Verizon having 7 Million*. Now, those numbers don’t necessarily reflect the holiday quarter so both could be higher today, but those are what we will use because I doubt the gap narrowed any.

So does AT&T have more smart phone owners because iOS was the first and Android was behind? Possibly, but comScore’s latest data also shows that Android’s growth on Verizon came at the expense of RIM. Meaning, people switched from RIM to Android on Verizon’s network. So, will people switch as easily from Android to the iPhone on AT&T?

I think it is possible that a number of Android owners will switch from their DROID to the iPhone. If I was forced to guess a number I’d say it’s less than 20%. I believe the largest opportunity for the iPhone on Verizon is with the 75% of consumers on their network not yet on a smartphone. I fully anticipate the level of interest in the iPhone to continue and now that it is on Verizon I do believe there is significant pent-up demand.  One other point is that we know that iPhone drives higher ARPU (Average Revenue Per User) for AT&T. Verizon desperately wants this so they will market the iPhone heavily, possibly even more so than Android devices.

This question will get answered when we see the numbers of pre-orders for existing Verizon subscribers as well as how long the lines are on February 10th.

Keep in mind, though, that Android is certainly not going anywhere and will continue to be a viable, growing force in the marketplace. I do, however, feel that its growth will take an initial hit as the Verizon iPhone enters the market. Verizon has more Android owners than AT&T; that point is clear. Android’s growth on Verizon has directly benefited from the iPhone not being on Verizon. That is no longer the case, the playing field is now level, and we will see what happens as both platforms and networks compete for customers.

Final Point.
Watching Apple and Google compete now on level terms is incredibly exciting for me as an analyst and you as a consumer. These companies and the networks that support them are now going to compete at an unprecedented level for our business. When that happens, consumers win.