A team of researchers have discovered evidence of thousands of black holes near the center of our galaxy. Using NASA’s Chandra X-ray Observatory, Chuck Hailey of Columbia University in New York and crew pointed to a large number of X-ray binaries near the center of the Milky Way in a study published this week. They call their discovery a “density cusp” because of the amount of stellar-mass black holes in one relatively small space. Once you roll in near that arena, chances are you aren’t going to be rolling back out.

How to find a black hole

Would that there were a black hole out in space all by itself with no matter near enough to it large enough to see, said black hole would not be visible. The black hole itself is not visible, for it sucks light into itself and does not let said light back out again. However, there are signs of black holes out in the vast reaches of space.

A black hole can be detected by witnessing matter falling in – because before light falls in to the hole, it can still be seen. When a black hole is within gravity’s distance of a star, gas can be seen being pulled away from said star to said black hole. It’s like a tornado: the only reason you can see the tornado is because of the matter that’s being thrown around in it.

The image at the head of this article was part of a 2017 study showing a star in close orbit around a black hole. That’s sorta what we’re talking about today, too, with X-ray binaries.

An X-ray binary is an element which indicates the existence of a black hole. The detectable X-rays are produced when gas from a visible star transitions into an otherwise invisible black hole. It’s when the gaseous material falls towards said black hole and heats up to millions of degrees that X-rays are produced, and the transfer can be detected. These X-rays appear as a point-like sources in images produced by Chandra. 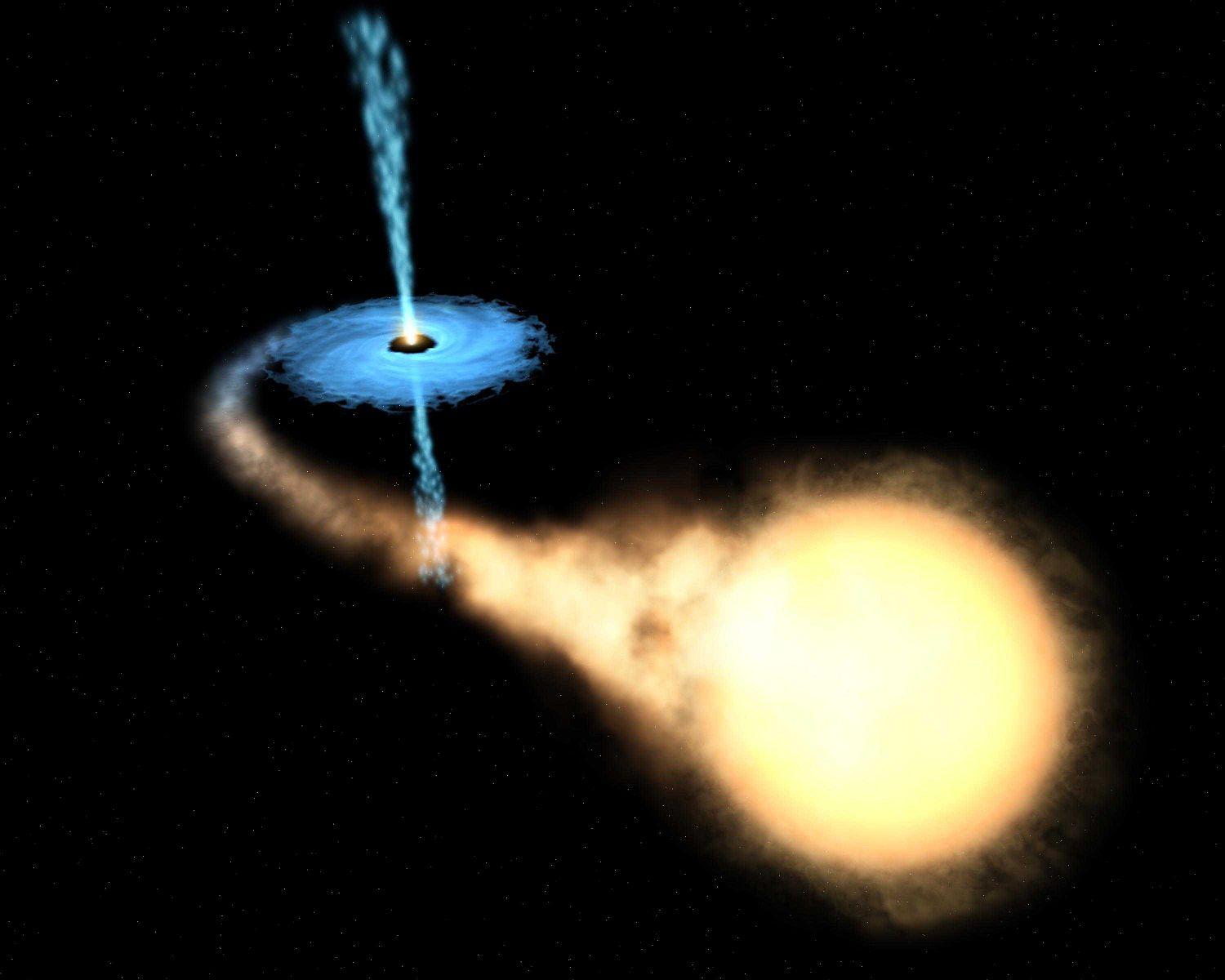 The image above depicts what an X-ray binary might look like. This image was created by an unnamed artist for NASA. “Artist’s rendition of a black hole with an orbiting companion star that exceeds its Roche limit. Mass from the companion star is drawn towards the black hole, forming an accretion disk.”

At the center of our galaxy, the Milky Way, there’s a supermassive black hole by the name of Sagittarius A (Sgr A). It is surrounding Sgr A that evidence was found of one massive amount of stellar mass black holes. 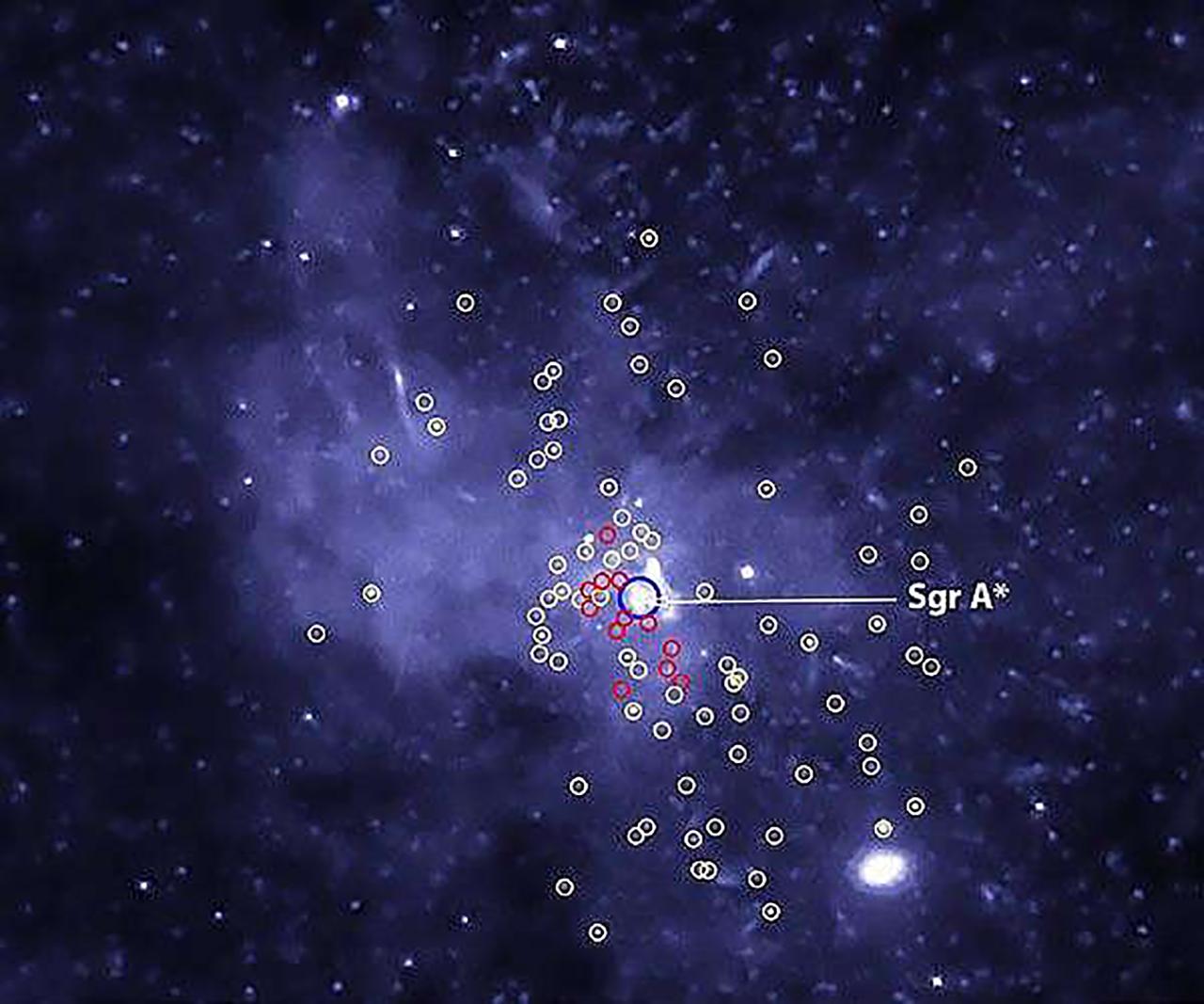 Fourteen X-ray binaries were discovered by researchers at the point at which they wrote their study. Every one of these (black holes with a star nearby) was within three light years of Sgr A. Twelve of these black holes are marked in red in the image above.

The remaining two X-ray sources (from the original 14) were eliminated from the black hole count. These two outliers had “characteristic outbursts” which led researchers to surmise that they probably contained neutron stars – and weren’t really what they were looking for.

How many black holes? 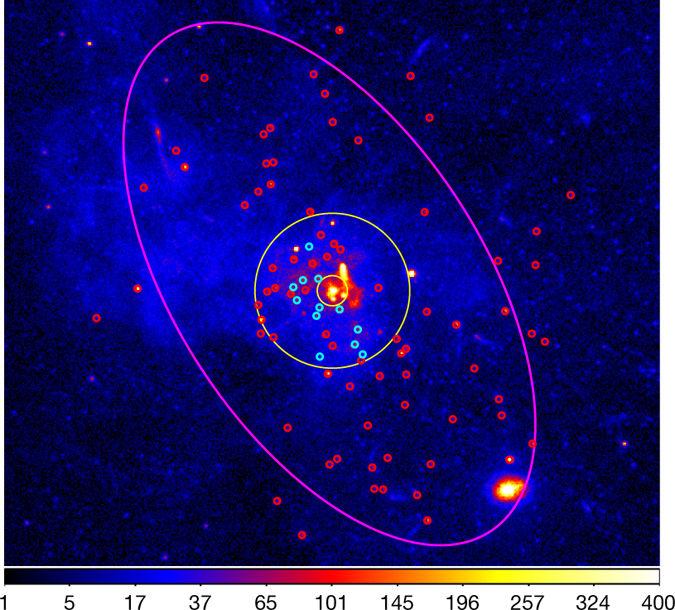 The vast majority of the X-ray binaries discovered in this region around Sgr A were identified as likely containing black holes. Theoretical analysis of the study and the information therein by Aleksey Generozov of Columbia and his colleagues suggest that between 10,000 and 40,000 black holes likely exist near the center of the Milky Way.

Should I be worried?

Unless you plan on discovering warp drive and wish to go on a trip to the center of our galaxy and Sagittarius A, you should be safe from black holes in the immediate future. To learn more about this subject, have a peek at the paper “A density cusp of quiescent X-ray binaries in the central parsec of the Galaxy.”