The best Google Photos alternatives you may already be paying for

The big Google Photos change is almost upon us, and if you’ve been enjoying free, unlimited uploads since the cloud storage service launched then you’re about to get an unpleasant surprise. Switching to a paid model will help keep Photos around, Google argues, but the good news is that there’s a decent chance you could already be paying for an alternative.

Wait, how is Google Photos changing?

Until now, one of Google Photos’ big lures has been the promise of unlimited photo and video storage. To take advantage of that, you have to agree to use Google’s compression settings – it calls that “High Quality” uploads – but otherwise you’ve been free to store as much in the cloud as you want. As of June 1, 2021, though, that all changes.

From that point, all new uploads will count against your Google storage: the amount of cloud storage you have as part of your free, or paid, Google account. Everyone gets 15GB to begin with when they sign up, and until now that’s been shared between services like Drive and Gmail. This policy change adds Google Photos to that sharing list. 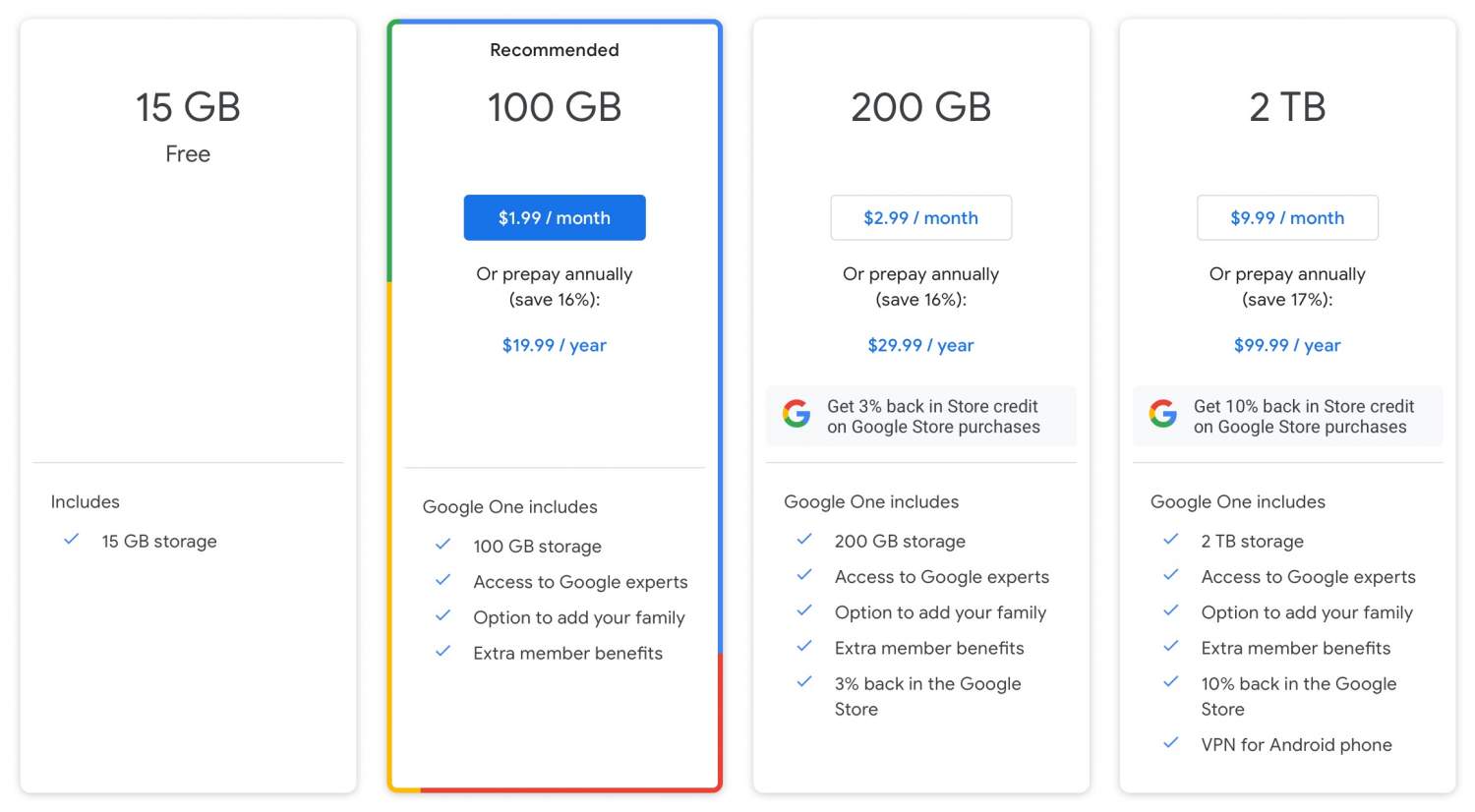 If you’re getting close to maxing out your free storage, there’s a new tool which might identify some easy candidates for deletion. Or, Google has various One plans to subscribe to: they start at $1.99 per month for 100GB. That capacity is, again, shared across your various Google services, plus you can add family uses to it too. To be honest, Google’s storage prices are pretty competitive, but if you’ve been used to free Google Photos then you might still want to shop around. After all, some services you’re already paying for could have alternative cloud storage you can take advantage of.

Most people know Amazon Prime for the delivery perks and the access to free movies and TV shows as part of Prime Video. However there are actually various other extras that come as part of your subscription, and if you’re already paying the annual fee then it might make sense to take advantage of them.

Prime users get unlimited photo uploads to Amazon Photos at full resolution, and 5GB of video storage. Like with Google Photos, you can use Amazon’s app on your iOS and Android devices to automatically upload new images and videos from your phone or tablet. Or, you can upload them from a desktop browser.

In fact, anyone can get Amazon Photos access without paying for Prime, though then you’re limited to 5GB overall. If you cancel your Prime membership, or it expires, you’ll be moved to that 5GB plan as well. Amazon offers paid storage plans from $1.99 per month.

Apple iCloud does photo storage too

Like Amazon and Google, Apple’s iCloud Photos service offers a chunk of free storage for all sign-ups. You get 5GB to begin with, though that’s shared across iCloud Drive, Notes, Backups, and other iCloud services. You can opt to add more iCloud storage with plans starting from $0.99 per month. 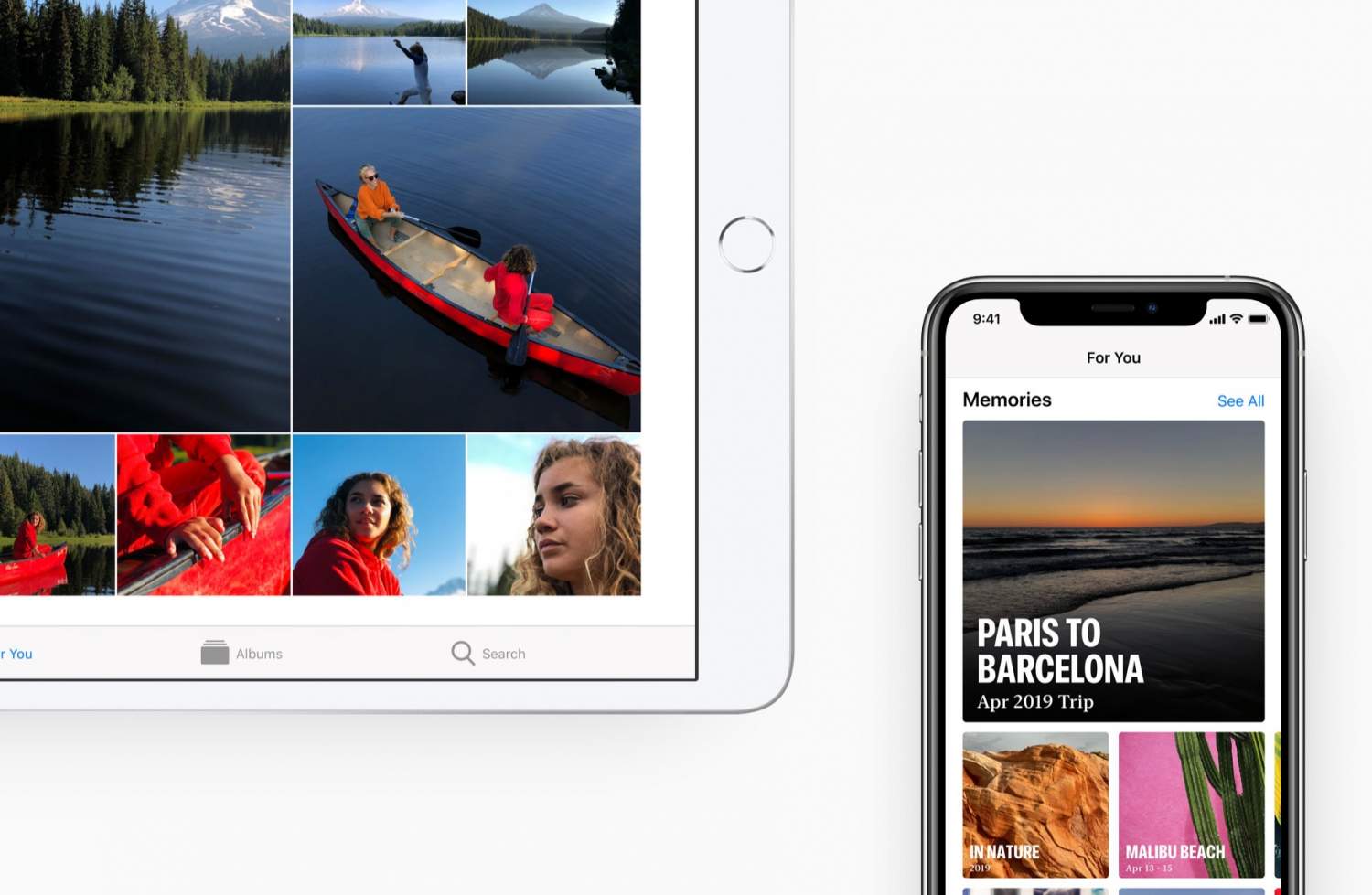 However, a lot of Apple users have already signed up to Apple One. That bundles together Apple Music, Apple TV+, and Apple Arcade into a single monthly payment – from $14.95/mo for the Individual plan – but also actually includes at least 50GB of iCloud storage too.

You can use that to store more photos and video, and automatic uploads from your phone or tablet are straightforward too – assuming you’re within the Apple ecosystem. If you’re not using an iPhone or iPad, or indeed a Mac, then the experience is less streamlined. Apple has web interfaces that can be used on Android phones and Windows PCs, but it’s definitely not as clean an experience overall. Still, if you’re deep in the Apple world, iCloud Photos’ tight integration with your iPhone takes some beating.

Microsoft 365 does auto-uploads to OneDrive

A lot of families have found themselves with a Microsoft 365 subscription at this point, particularly given working-from-home and home-schooling. What you might not realize is that, as well as Word, Excel, PowerPoint, and other familiar apps, there’s also support for using the bundled OneDrive storage for your mobile photos, too. 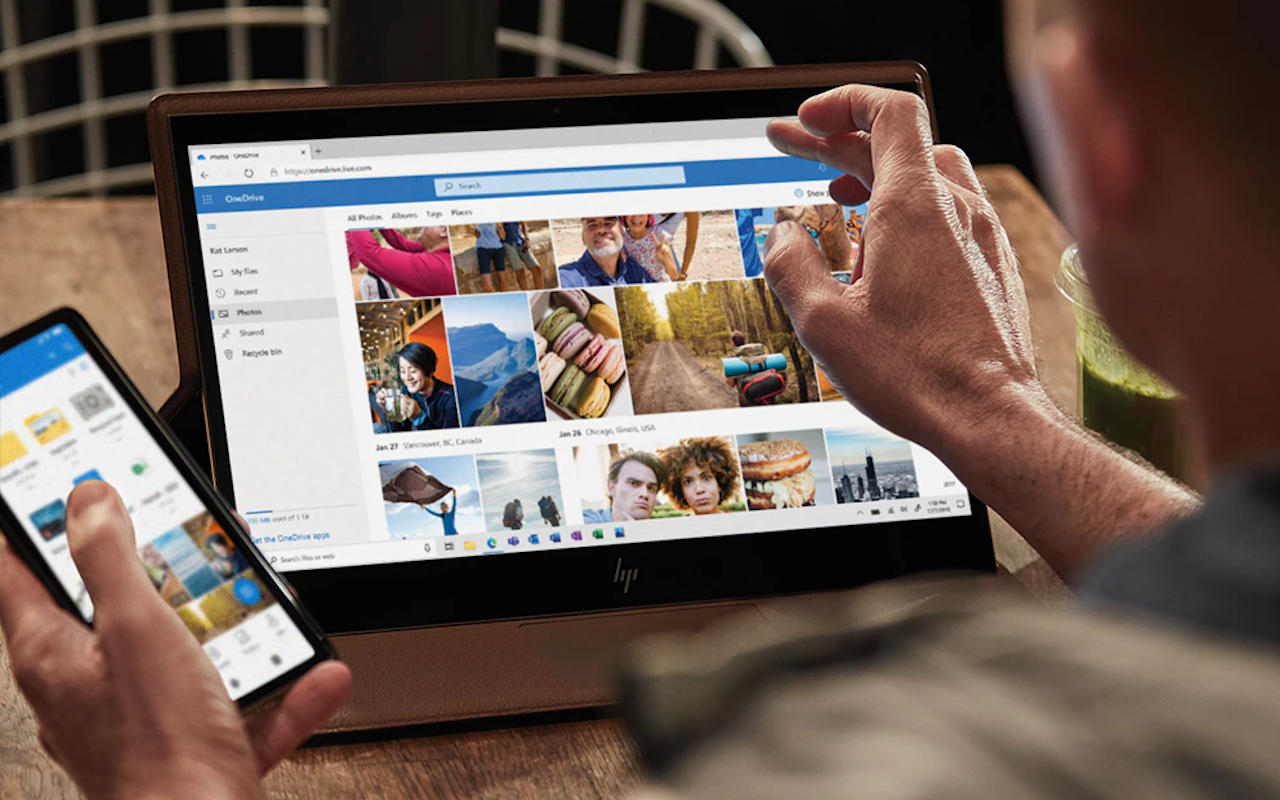 The OneDrive app for iOS and Android can be set to automatically upload the new photos and videos added to your smartphone’s camera roll, just like Google Photos does. A Microsoft 365 Personal plan is $69.99 per year, and comes with 1TB of storage. That’s shared across all your Microsoft cloud products, including regular files.

Or, $99.99 per year gets you Microsoft 365 Family. That includes support for up to six people, with 1TB of space for each. Both plans can use the OneDrive mobile app.

Most photographers are no stranger to Photoshop, and Adobe Creative Cloud offers various plans with access to the editing software and other apps like Lightroom. If you’re already signed up, though, it’s worth remembering that you get at least 20GB of cloud storage bundled with the regular Photoshop + Lightroom package. That’s priced at $9.99/mo.

If you’re a Lightroom-only subscriber, meanwhile, that’s also $9.99/mo, but it comes with a full 1TB of storage in Adobe’s cloud.

Adobe expects that storage to be used by those doing image editing, so the downside is that the mobile experience isn’t quite as seamless as Google Photos or the other services. There’s no auto-upload, for example: instead you manually choose which images you want to back up in the cloud using the Adobe Creative Cloud apps for iOS and Android. That may involve a little more work, but it does help take advantage of storage you could already be paying for.

What if I want to stick with Google Photos, though?

Though there are alternatives out there, if you have a 5+ years of images and videos backed up to Google Photos the idea of downloading them and shifting them to a rival service might be a deal-breaker. Or, maybe you really enjoy Google’s powerful image search and organization features. Luckily, there are still ways to get a similar deal to the one Google is about to retire. 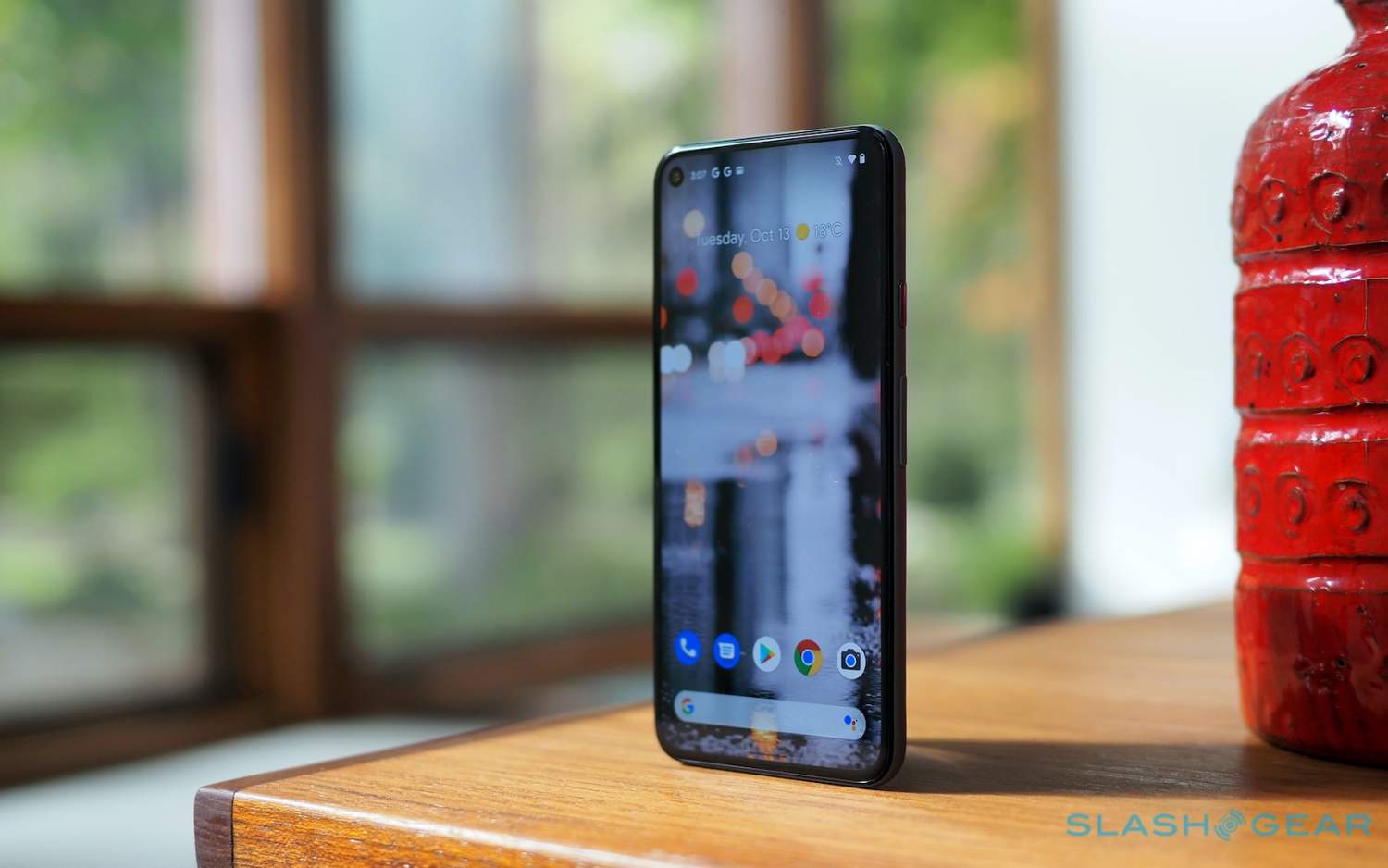 Buyers of Google’s Pixel smartphones have long received Google Photos perks, and though the latest range – including the Pixel 3a, 4/XL, 4a/5G, and Pixel 5 – don’t get free, unlimited original-quality uploads any more, they do get some free unlimited access. The “High Quality” tier is being renamed “Storage Saver” and owners of any of those Pixel models will get unlimited access to that, even after the June 1 deadline that affects anybody else.

The downside is that, beyond this current generation of Pixel phones, Google is expected to end this particular perk. At that point, those with big photo and video libraries may want to look elsewhere.