The 2022 Porsche 911 GT3 is a race-honed, road-legal love letter to enthusiasts

Porsche knows how to woo its enthusiasts, and the 2022 Porsche 911 GT3 is excellent example of that in action. The newest example of the automaker’s race-ready road cars, the new 911 GT3 pairs 502 horsepower with a head-turning design and serious motorsports credentials.

The engine is a naturally-aspirated 4.0-liter six-cylinder boxer, with a red line all the way up at 9,000 rpm. It’s capable of 502 hp and 346 lb-ft of torque, and is paired as standard – for maximum performance – with a seven-speed PDK transmission with paddle shifters. 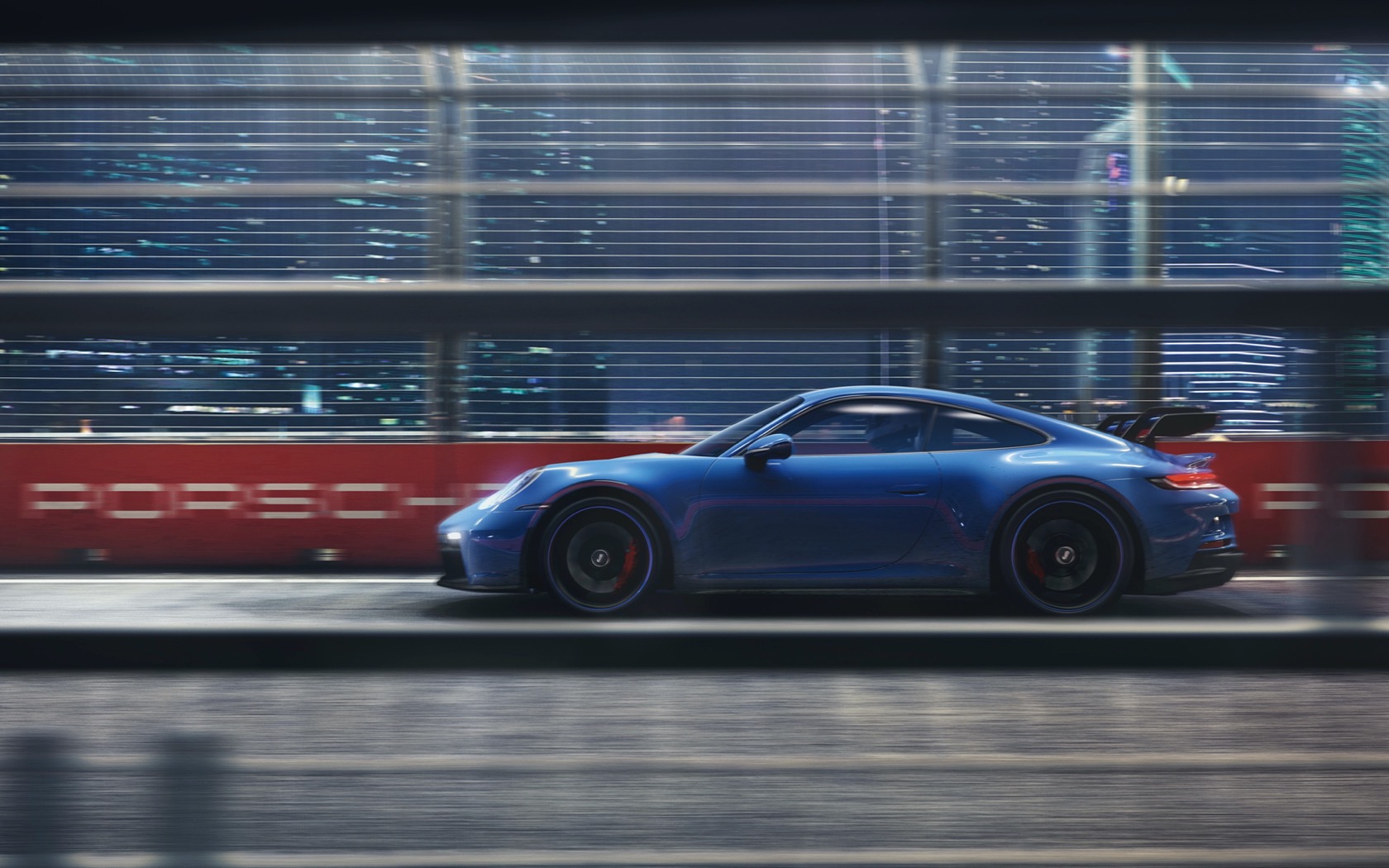 That’s been specially engineered and tuned for the 911 GT3, Porsche says, but you can optionally have a six-speed manual gearbox if you’d rather three pedals. With the PDK, 0-60 mph takes 3.2 seconds, with the coupe rocketing on to a top speed of 197 mph.

The engine, Porsche claims, is “virtually identical” to what you’d find in a 911 GT3 Cup race car, though in the 2022 911 GT3 it’s wrapped up in a vehicle that’s actually road-legal. It uses six independent throttle bodies for improved response on the gas pedal, together with a dry-sump lubrication system with a seven suction stage arrangement to make sure oil circulates despite even very high lateral and longitudinal loads. 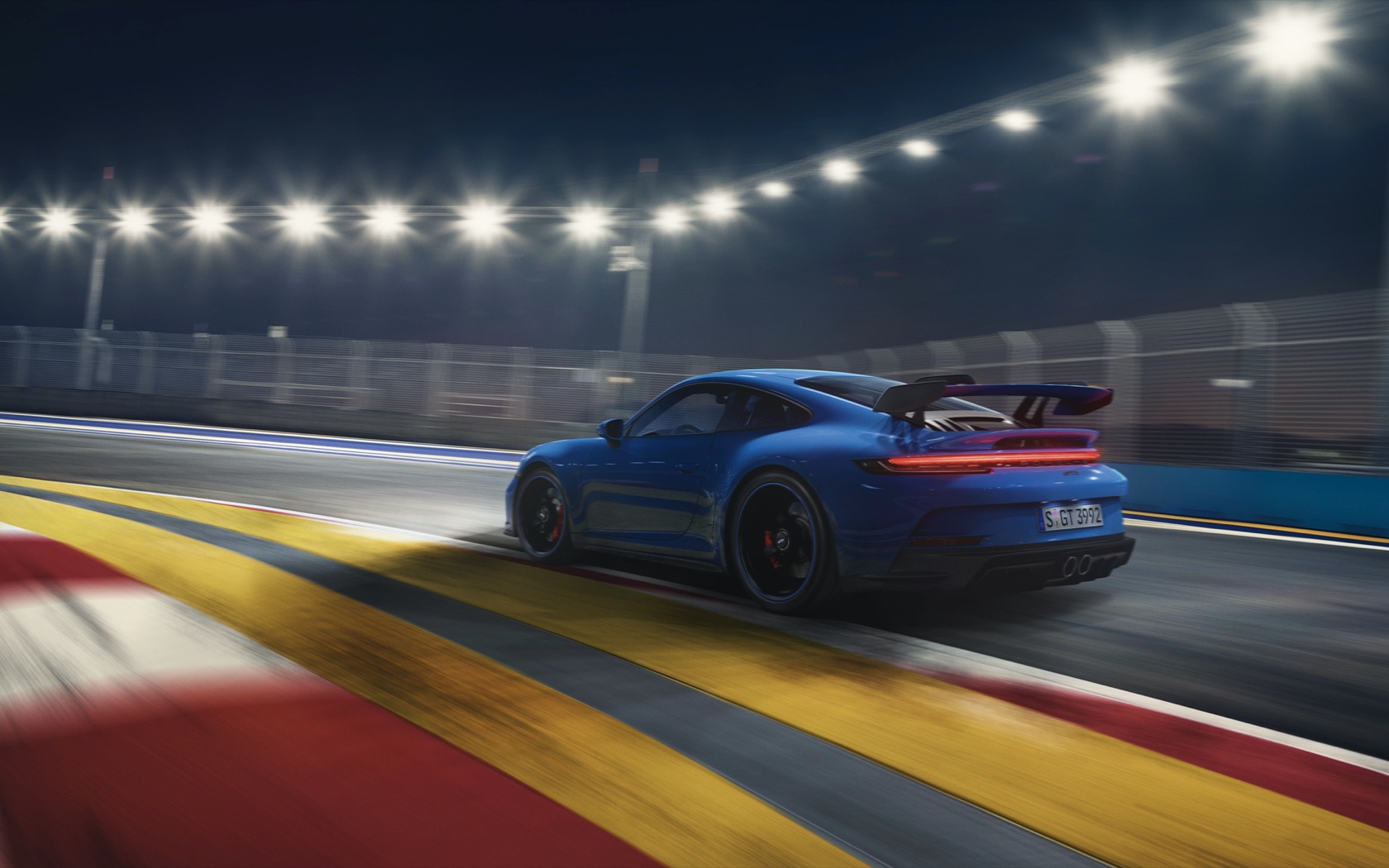 Outside, the coupe is based on the latest 911 Carrera body, with a front track width increase of 1.9-inches. Porsche used plenty of carbon fiber reinforced plastic (CFRP), however, to keep the weight down; indeed, it’s nearly the same as the outgoing 911 GT3, apparently. Lightweight, noise-insulated glass on all the windows has also been implemented.

New cooling intakes at the front and an adjustable front spoiler lip and front diffuser aren’t just for looks: they contribute to aero and cooling, and can be tweaked for track use too. Custom side skirts, a large rear diffuser, and a striking swan-neck rear wing also help mark the new 911 GT3 out as something special. The rear wing is manually adjustable across different positions for road or track use; in the “normal” position, Porsche says, it still delivers downforce up to 50-percent grater than the old 911 GT3. Set both front and rear spoilers to “performance” and you’re looking at up to 150-percent more downforce. 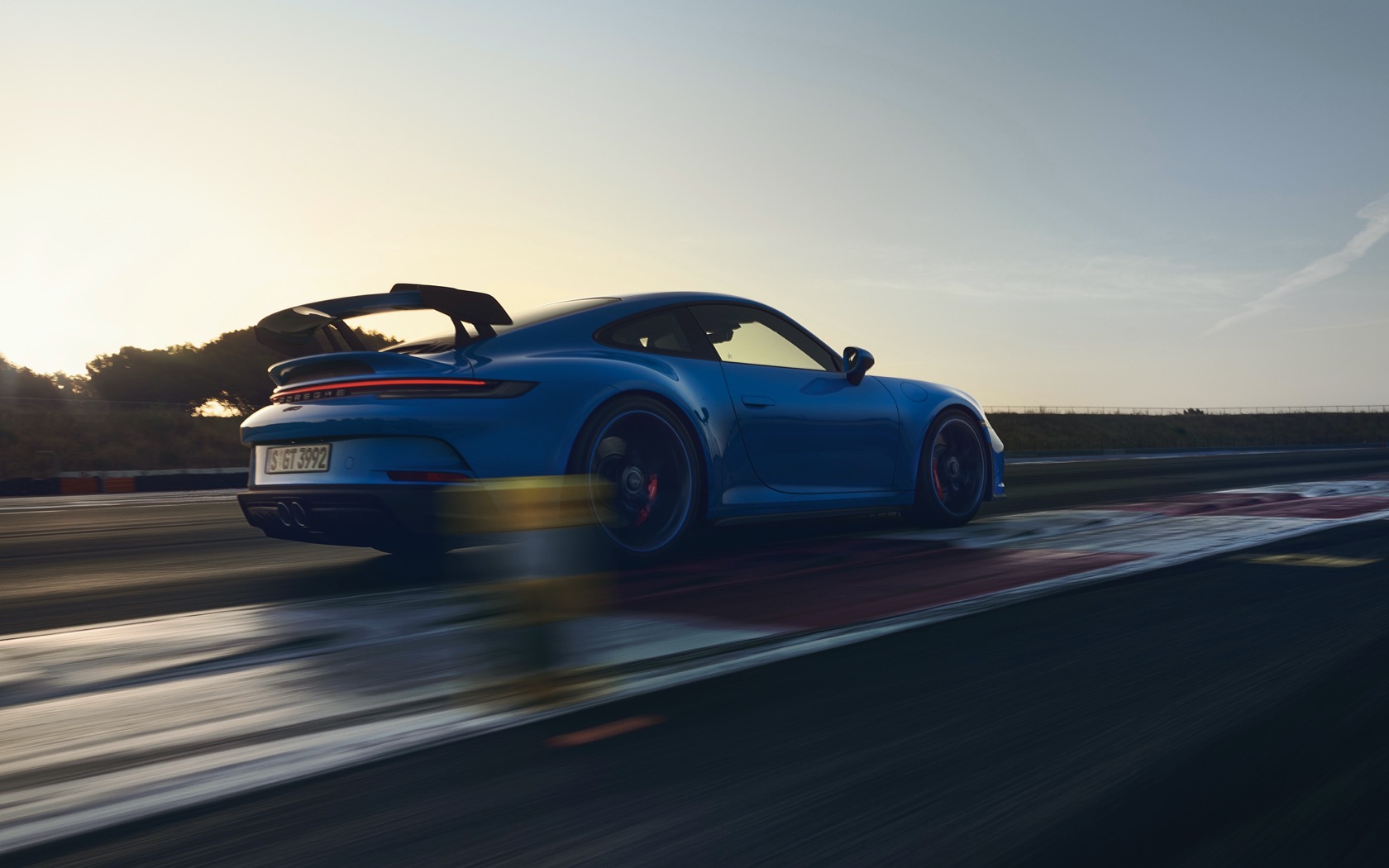 The 911 RSR and 911 GT3 Cup cars donate the tech behind their double-wishbone front axle, Porsche adapting it for road use. That should mean more direct and precise steering, along with improvements in cornering stability. The rear axle is a multilink design, with more ball joints than before for a more flexible chassis. It’s a completely different system, front and rear, to a regular 911 Carrera.

20-inch front wheels and 21-inch rear wheels use a GT-specific forged alloy design. They’re also half an inch wider at the front compared to the old car, and an inch bigger in diameter at the rear, but also around 3.5 pounds lighter. Shark Blue or Guards Red wheel pin striping is available, as are a choice of ultra high-performance summer tires or a street legal track tire previously only offered on its RS models. 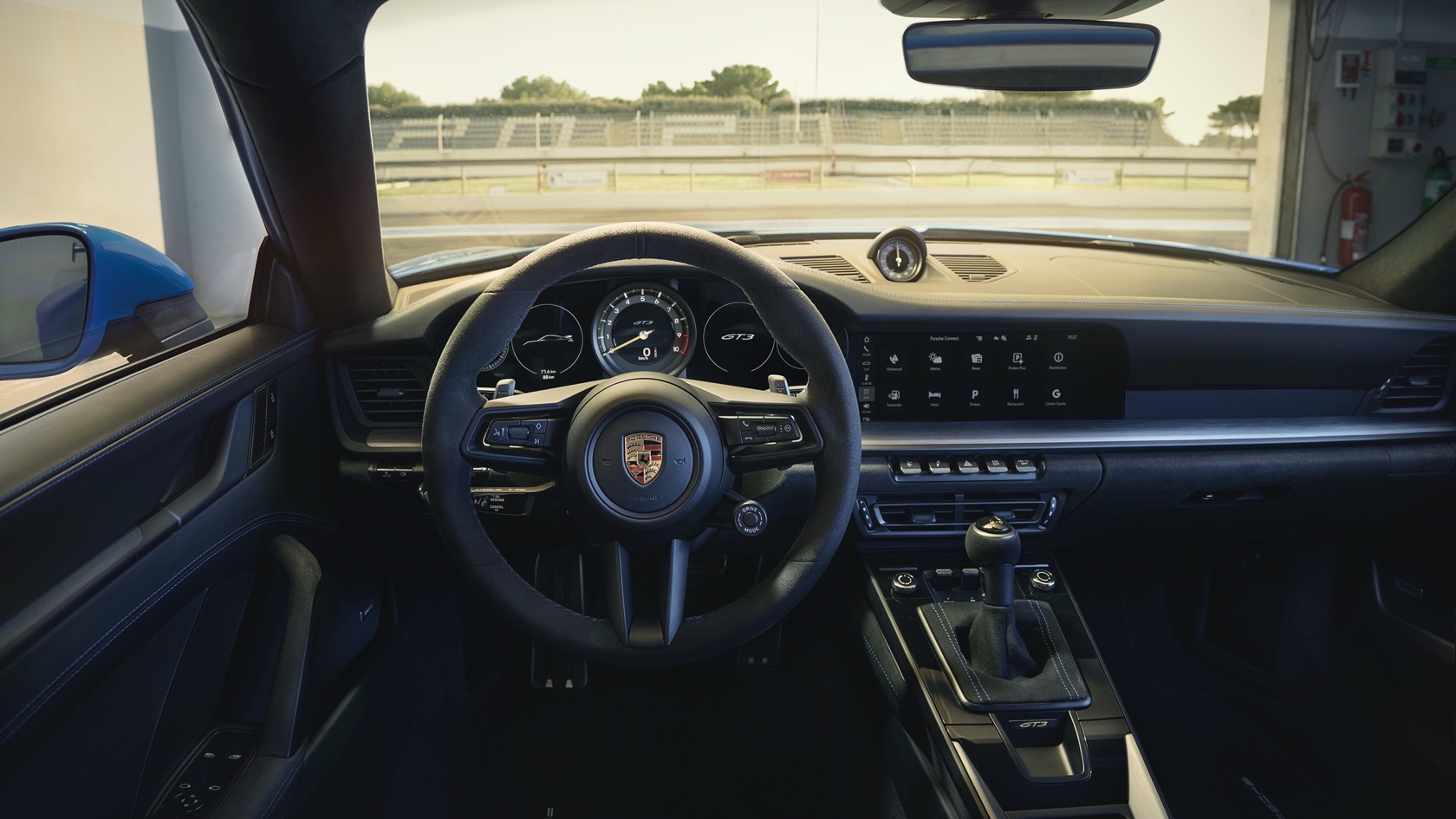 To slow them down, there are cast iron discs as standard. They use a huge 408mm front disc, like the 911 Turbo, though thanks to a narrower friction ring Porsche has managed to trim weight by 17-percent compared to that car.

Porsche Ceramic Composite Brakes (PCCB) are available as an upgrade, also increasing the disc sizes even further – 410 mm in the front and 390 mm in the rear – but coming in at around half the weight of similarly-sized cast iron brake discs. They also support what Porsche says is a “significantly improved” level of thermal load capacity for more effectiveness even when you’re pushing over extended periods. 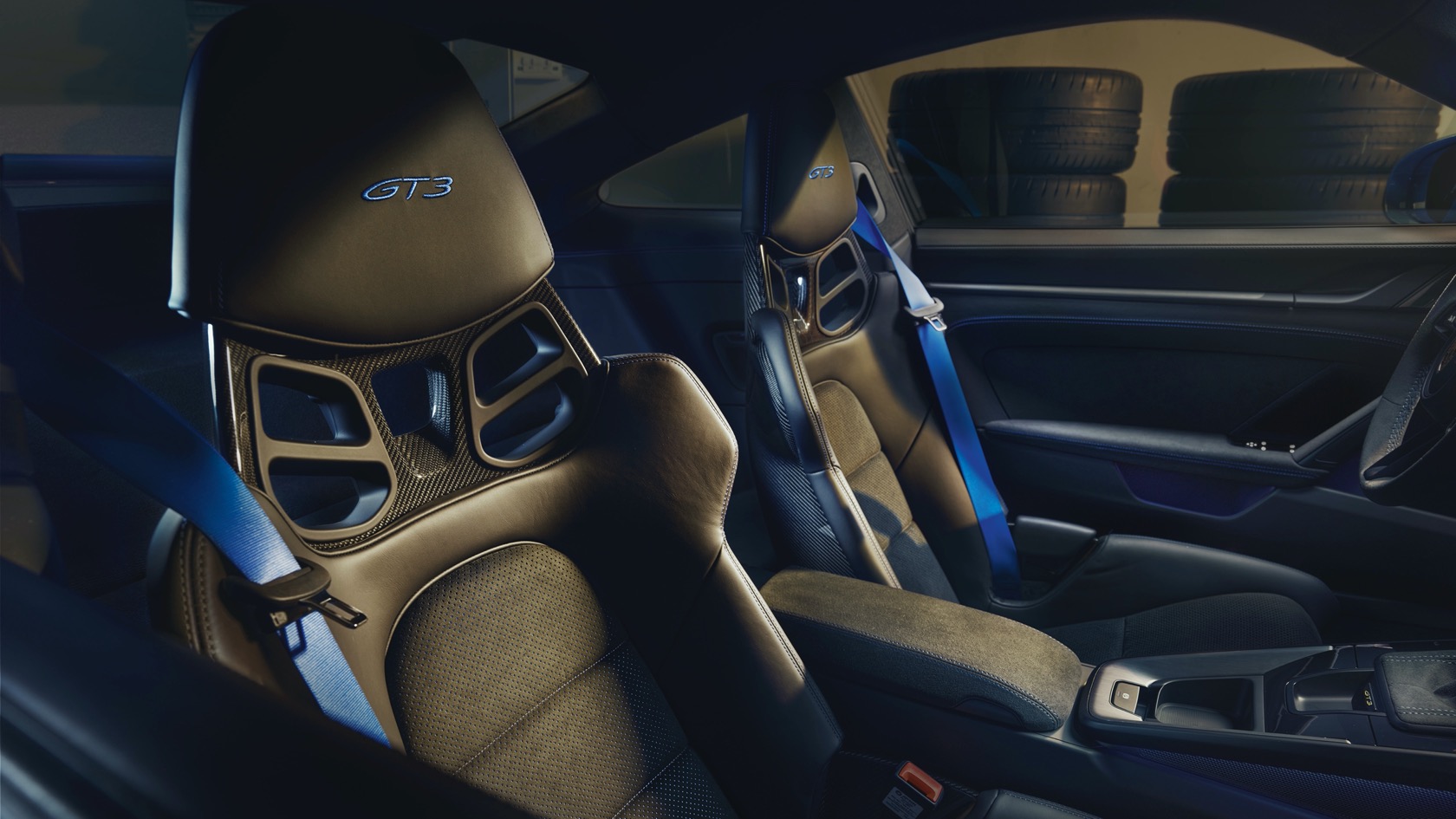 They could come into their own on something like Porsche’s Nürburgring-Nordschleife run, where the 2022 911 GTS lapped the 12.944 mile course in 6:59.927 minutes. That’s a 17 second improvement over the old car. 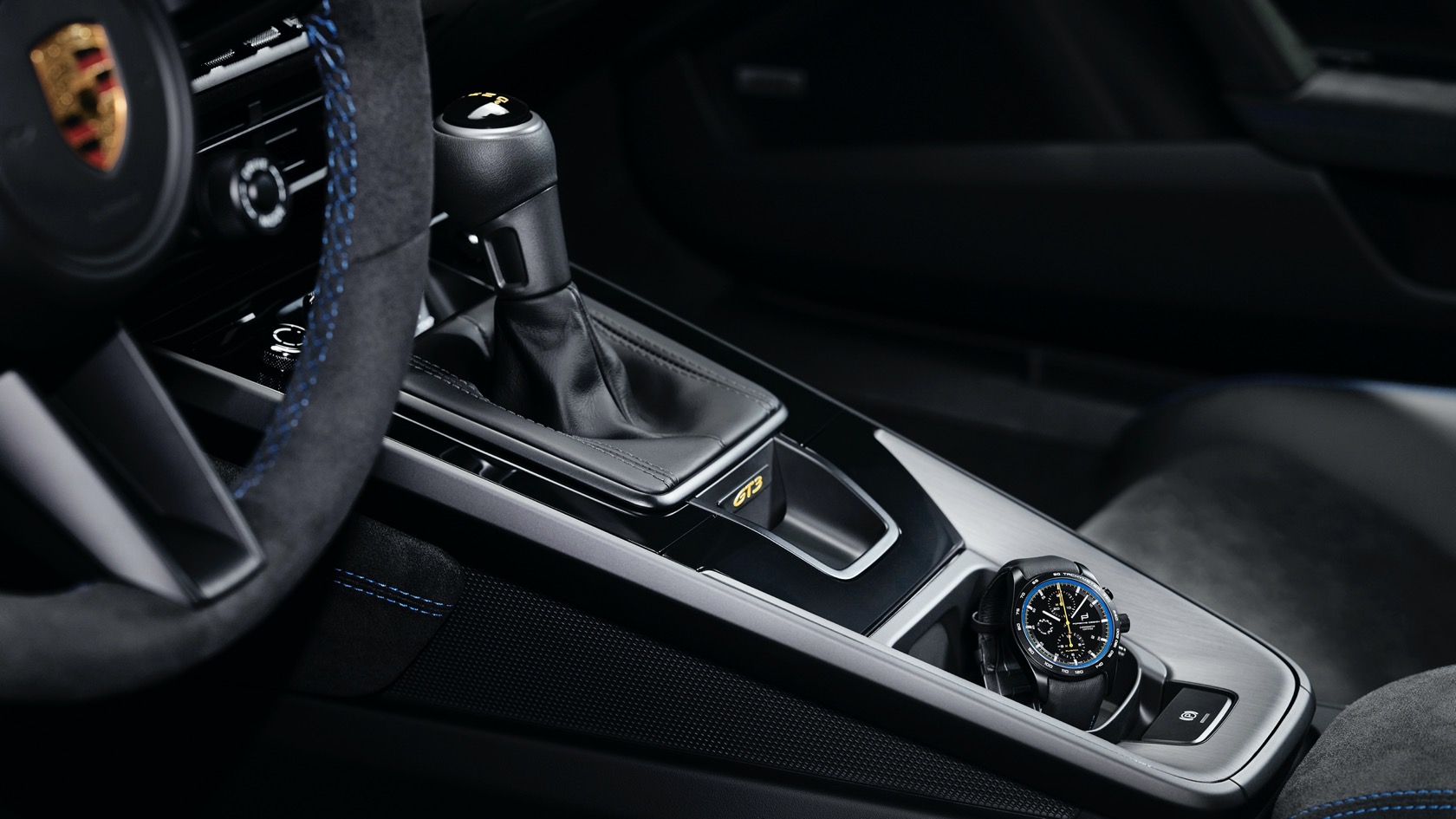 Inside, it’s a mixture of familiar and custom. The GT3 Multifunction Sport steering wheel – 360 mm in diameter and wrapped in Race-Tex fabric – is standard, with a drive mode switch for the first time. Four-way Sport Seats Plus are standard – with 18-way Sport Seats Plus and carbon fiber Full Bucket Seats options, the latter trimming roughly 26 lbs versus the standard seats, available – and there’s a unique gear selection lever. Based on the manual transmission stick, the GT3’s PDK gear selection lever supports manual upshifts and downshifts without the use of the paddles. 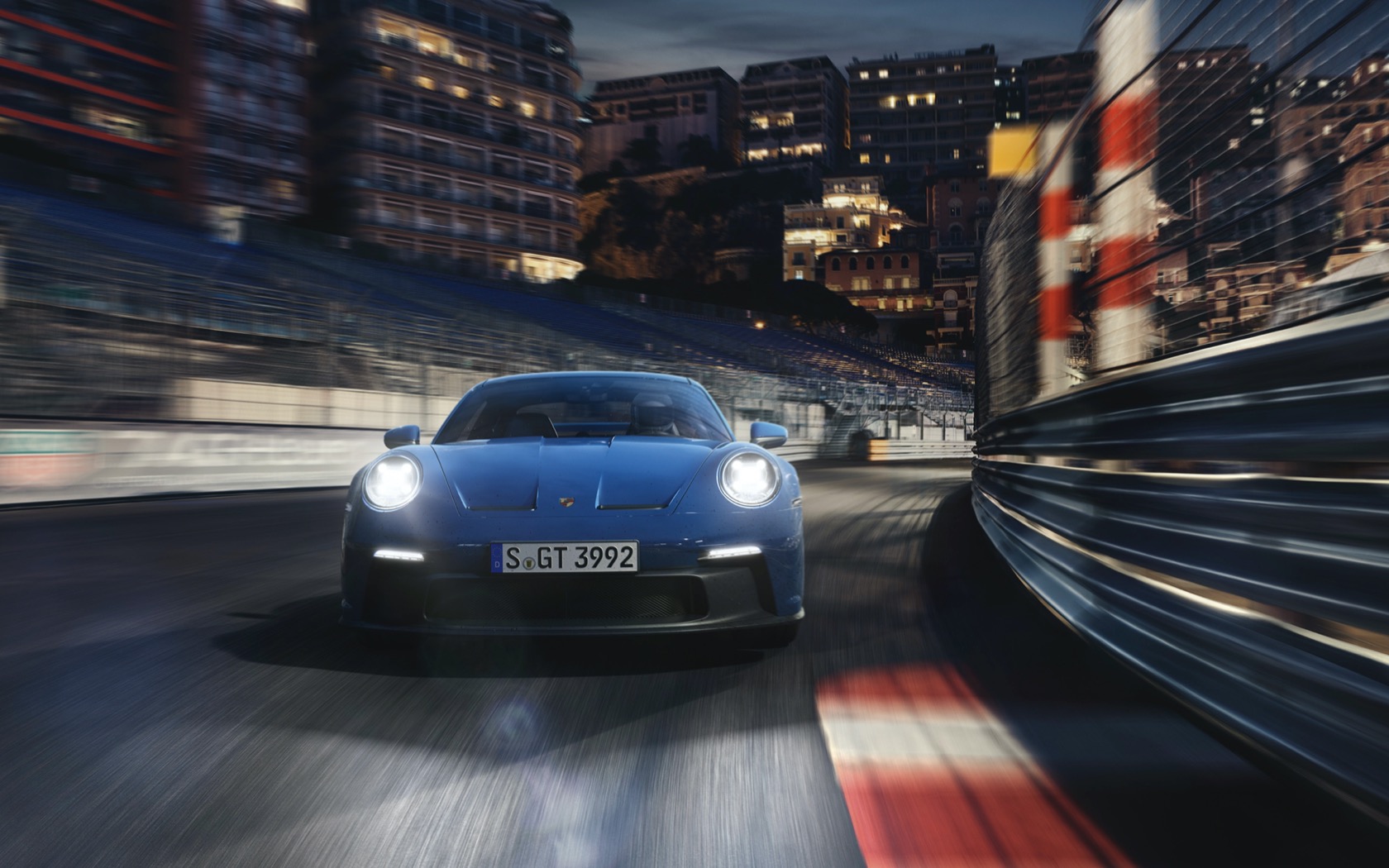 For the driver’s display, a GT-specific “Track Screen” mode trims the data shown to the bare essentials: tachometer, tire pressure and water temperature, and a driver-configurable slot on the right. Optional is the Chrono Package, with an analog stopwatch atop the dashboard, a digital stopwatch in the instrument cluster, and Lap Trigger support. That’s Porsche’s pro-timing system, which synchronizes details on your runs with the Porsche Track Precision app.

The 2022 Porsche 911 GT3 is set to arrive in the US come fall 2021. Pricing and availability for what’s likely to be a vehicle in high demand will be confirmed closer to release.