Mobile World Congress 2010 is fast approaching, but here at SlashGear we thought we’d grab a head start on our coverage. We caught up with Texas Instruments at their Dallas office to take a look at their latest OMAP3 and OMAP4 chipsets and some of the development hardware they’ve been producing. Most interesting, perhaps, is the OMAP4-based device you see here, capable of simultaneously driving three independent displays and packing a pico-projector module.

TI launched their latest OMAP3 ereader platform recently, and we started off looking at their ereader developer hardware. Unlike other chipsets, OMAP3 brings the E Ink display controller onboard, with a separate processor that can drive the panel with no impact on the main ARM core. While right now they’re driving monochrome displays, OMAP3 will be happy dealing with color and video-capable panels too, including support for Liquidvista and Pixel Qi panels. More details in this video:

As for OMAP4, that will offer a significant performance jump over the previous-gen platform, thanks to dual 1GHz ARM A9 cores. It’ll also be a more power frugal chipset; Texas Instruments reckon that, while a roughly 1,000 mAh battery would be good for 30 to 50 hours of MP3 playback with an OMAP3, the OMAP4 will offer up to 145 hours. More impressive, however, is the video performance. The OMAP4 chipset can drive three displays simultaneously – two onboard and an external screen or pico-projector – each showing different content. Resolution support isn’t fully finalised, but the internal displays can be “significantly higher” than WVGA – handy if you’re making a tablet, not a smartphone – while the HDMI port can output Full HD 1080p 30fps.

The way TI explained it to us, the three screens mean you can be browsing the web on one, monitoring your email on another, and all the while have a Full HD film or game playing on your HDTV. You’ll also be able to flick content from screen to screen, replacing the film with a photo slideshow, for instance, or a YouTube video you found in the browser. Alternatively, a pico-projector could be used when you don’t have a big LCD or plasma to hand. TI also claim the chipset supports “universal decode”, which basically means that no matter what the media format type you throw at it, the OMAP4 should be able to play it. 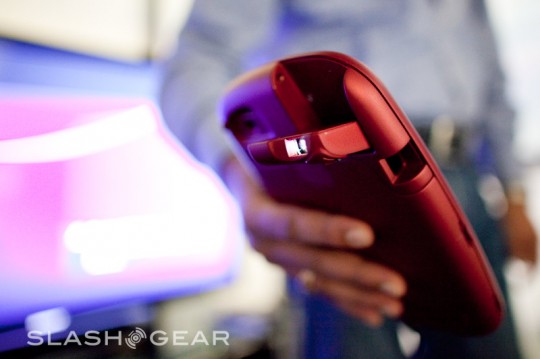 The OMAP4 is also capable of 1080p 24/30fps video encoding, and since users are probably going to want to share their content over 3G, Texas Instruments have put some work into reducing the potential impact on networks. The chipset can simultaneously record 1080p and D1 (e.g. regular TV resolution) footage, as well as still images, giving you an HD copy for local playback and a smaller version for uploading. Meanwhile there’s enough processor grunt to spare for digital video stabilisation, both for recording and, potentially, for stabilising the pico-projector when you’re operating it handheld.

It’s worth noting that the hardware you see here isn’t a reference design for consumer devices; instead TI will be offering it to OMAP4 developers who want to quickly get up to speed creating apps and content for hardware based on the new platform. Because of that, TI have packed it full of just about all the functionality they envisage developers taking advantage of: it has two 3.7-inch WVGA displays, dual front cameras, a 12-megapixel camera on the back and an integrated 15-lumen DLP pico-projector. Connectivity includes HDMI, wired ethernet and USB 2.0, along with WiFi, Bluetooth and 3G courtesy of an internal daughter card, there are GPS, proximity and accelerometer sensors, and the whole thing runs Android.

Of course, Texas Instruments aren’t the only company with a high-profile mobile chipset to talk about, so we asked them how the OMAP4 compares to NVIDIA’s second-generation Tegra, announced back at CES 2010. While production devices based on the Tegra 2 aren’t available yet, TI reckon there are several points at which they eclipse their rival. According to Marcelo O Vieria, general manager of the OMAP business group, the OMAP4 1080p video codec is stronger than that of the Tegra 2, in fact he reckons TI “have a better video engine than [NVIDIA] do”. OMAP4 also supports 20-megapixel or higher image processing, as well as three simultaneous displays, and it has significantly more memory bandwidth than Tegra 2 which means it’s better at multitasking. Worth remembering, too, is that OMAP4 is suited to smartphones, which is an area Tegra is yet to extend into.

Unfortunately Texas Instruments weren’t allowing video of their OMAP4 prototype as yet, though we did take some photos of the hardware in action.  Suffice to say, video playback was as smooth as if from a standalone Blu-ray player. As for the first commercial products, they’re expected to reach the market in late 2010 or early 2011, with TI proving tight-lipped on exactly which manufacturers are on-board; both smartphones and other devices – such as tablets – are apparently in the pipeline. They’re promising more information when we meet them at Mobile World Congress 2010 in a couple of weeks time.