It’s a big week for Tesla, and for Elon Musk. The company held its promised Model S Plaid delivery event in Fremont, CA, last night, handing over the first 25 examples of the super-fast EV, and it was an opportunity for the outspoken CEO to make the pitch not only for Tesla, but for electric vehicles in general.

Indeed, while Musk clearly wasn’t going to miss a chance to talk up the newest Model S version – and, to be fair, with a 0-60 mph time of just 1.99 seconds, who can blame him – he also made a strong pitch for why cars like this Plaid edition are important in the broader scheme of things. After all, Musk argued, it’s vital for the industry and the planet that sustainable energy vehicles “can be the most kick-ass cars, in every way.”

There’s no denying that the Model S Plaid is unusual in that respect. While it may look like a fairly regular Model S from the outside, the new tri-motor drivetrain – which has three special electric motors – delivers 1,020 horsepower. That’s enough for a top speed of 200 mph, as well as ridiculously quick 0-60 times.

Tesla has been promising a fast 1/4 mile time, too, and Musk made it his job to confirm that before even getting on stage. Opening the event with a drag run to prove the 9.23 second quarter-mile was possible, it was an example of the showmanship we’ve come to expect from his events. So, too, was the fact that the event started late, which has also become something of a Tesla hallmark.

For the 25 people who received their cars that evening, though, an hour or two delay probably was manageable. The Model S Plaid attempts to strike a balance between performance and usability: yes, there may be four-figure horsepower, but there’s also support for 390 miles of range on the EPA’s test cycle. Find a Supercharger, and you can add 187 miles of that range back after just 15 minutes plugged in.

Musk also took the opportunity to show off a slick new “Plaid Mode” leather jacket. Sadly that doesn’t appear to be available in Tesla’s apparel store, though you can get a matching t-shirt. 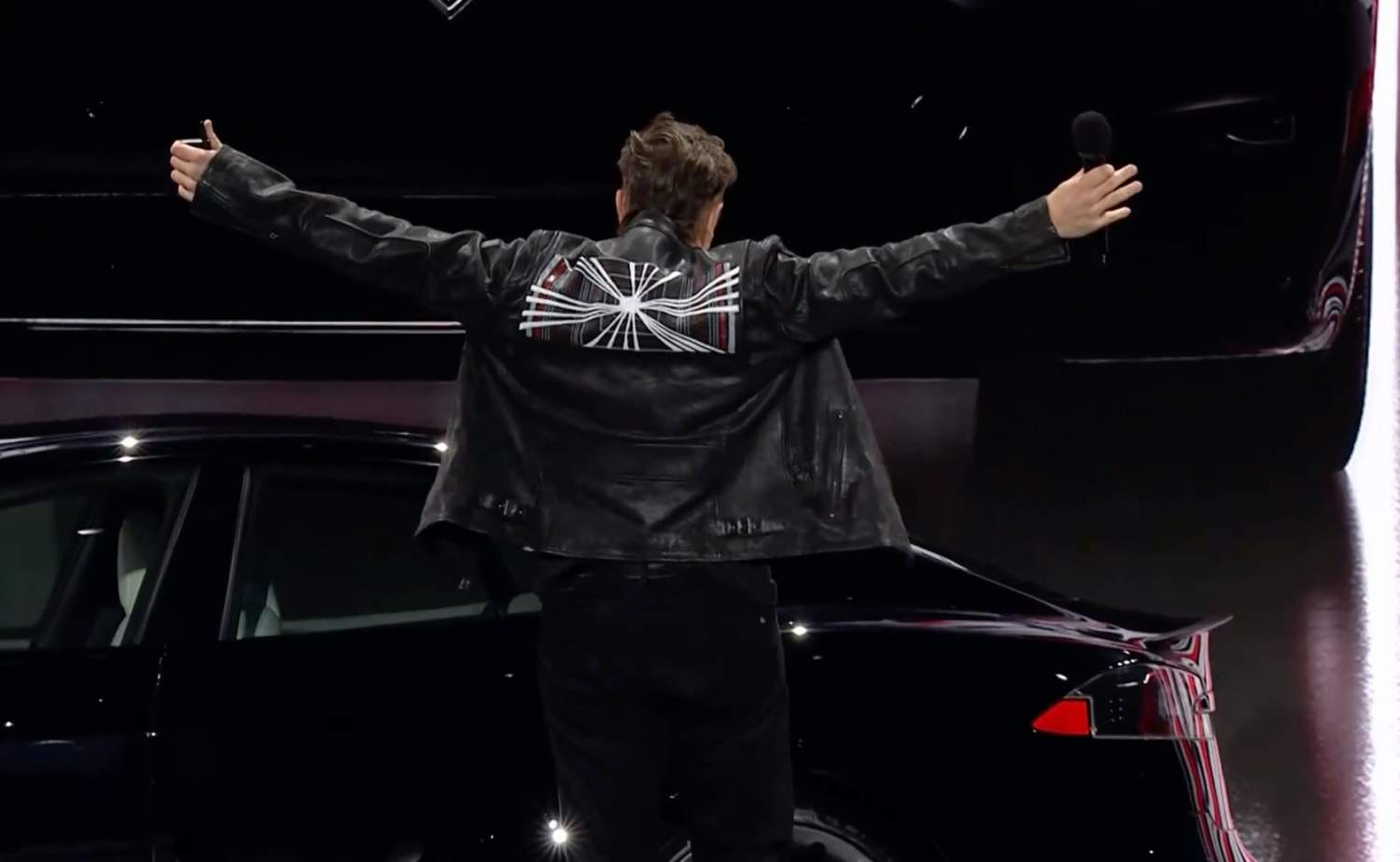 The new car is a four-wheel reminder that EVs have a battle on numerous fronts. The Plaid’s outright pace may be a direct hit on lingering skepticism about whether electric vehicles can match – and beat – internal combustion performance cars when it comes to speed, but it also tackles more everyday concerns like usability. Range anxiety continues to be one of the main issues holding back EV adoption, not least because drivers typically over-estimate just how much range they actually need.

What’s interesting is that, for the moment at least, the Model S Plaid seems to be Tesla putting a stake in the sand as to what it considers “enough” on that front. The automaker had been planning a version of the car, the Model S Plaid+, with 500+ miles of range, but Musk unceremoniously cancelled it on Twitter. The regular Plaid was sufficient, he argued.

There are, of course, other contributing factors to that, not least Tesla’s work on the 4680 lithium-ion batteries which were to drive the Plaid+ and then go on to feature in the upcoming Tesla Roadster. Challenges with their production were alway going to be a potential bottleneck, something the automaker has been reluctant to discuss as it focuses instead on Plaid’s raw performance.

According to Musk, Tesla plans to produce several hundred Model S Plaid cars each week soon, with a goal of increasing that to around 1,000 per week in the next quarter. Orders placed today should be delivered sometime this month, according to Tesla’s online configurator. 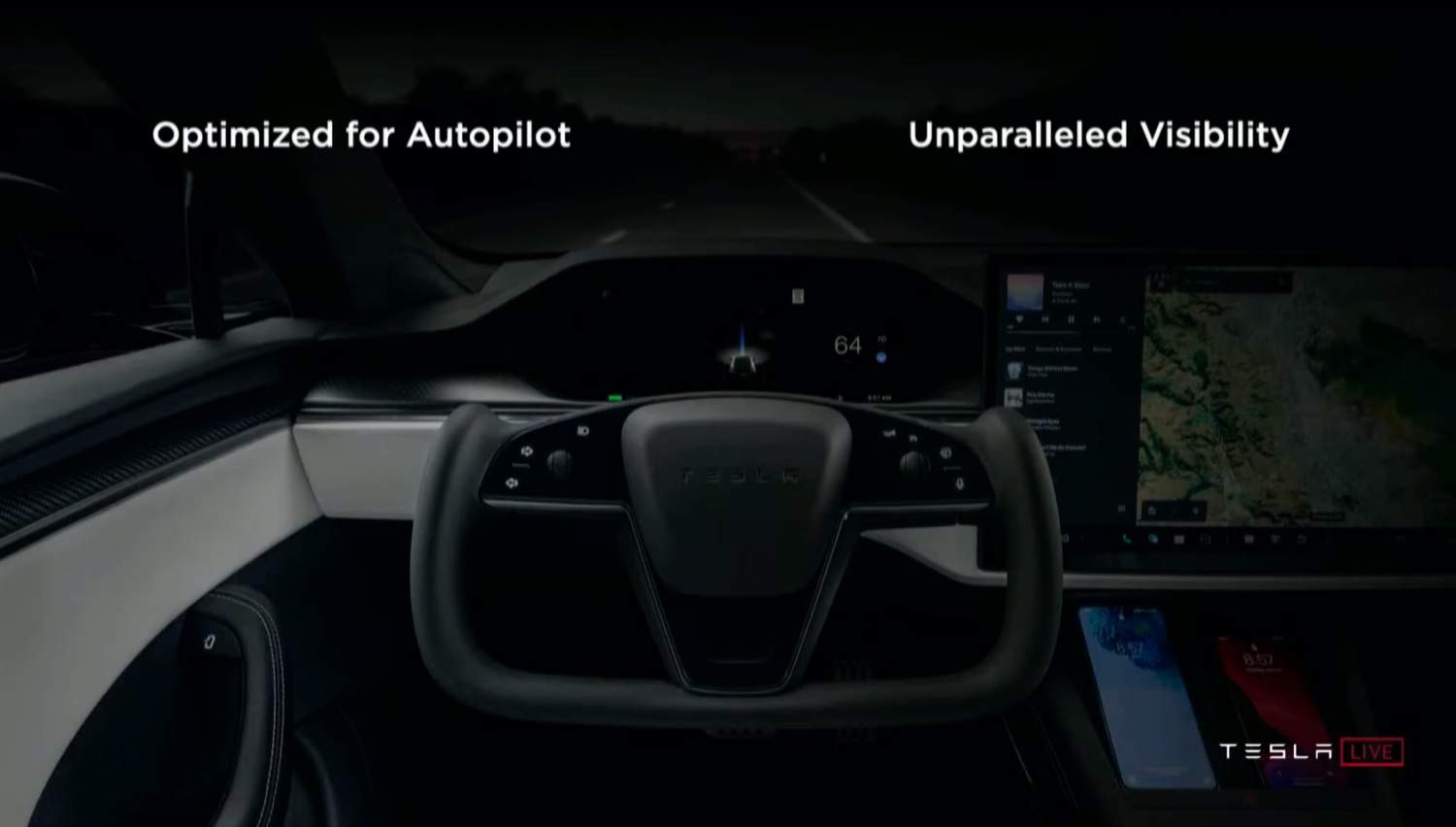 The EV’s pace is only one surprising feature. The other is inside, where a redesigned cabin features a larger, 17-inch central touchscreen and a secondary entertainment display for the rear seat passengers. It also adopts Tesla’s “yoke” steering wheel, with its unusual shape and cutaway top. Musk continues to insist that’s just as usable as a regularly-shaped wheel, and indeed has benefits to visibility too.

As Autopilot gains abilities, he argues, the need to actually use the wheel will reduce. The new Model S will also put itself into drive, reverse, or park automatically, Tesla doing away with the traditional drive mode selector.

As for the new infotainment system, that’s now powered by AMD chips, and has PlayStation 5 levels of power according to Tesla. That was demonstrated on-stage with a demo of Cyberpunk 2077 playing on the dashboard display. Although probably not as big as your living room TV, the ability to get some proper gaming in as you wait for a recharge could be a nice distraction.

Clearly, not everyone will be able to afford a $129,990 Model S Plaid, and not everyone wants their EV to have a Tesla badge on the front. Nonetheless while you may not always agree with Musk’s strategy – or his methods of communicating it – there’s a lot to be said for his broader mission when it comes to electrification. EVs do, still, face an uphill battle on a number of fronts when it comes to gaining mass-market traction, and demonstrating the folly of any doubts around performance that may persist is a good place to start.