Tesla’s 2017 Model S has failed to score top marks in auto safety crash testing, with the electric sedan falling short of IIHS’ 2017 Top Safety Pick+ rating. The Insurance Institute for Highway Safety’s trials sit alongside – and in some cases are more stringent than – the US government’s own NHTSA crash testing. It’s one of the organizations most notorious challenges that the Model S struggled in, though the automaker says a fix is in the works.

Dubbed the “small overlap front crash test”, it effectively measures how well a vehicle could protect its occupants if it hit a small, solid target not quite head-on. While that might sound like a rare event, it’s actually fairly common: think along the lines of a car swerving off the road and hitting a street lamp post. The test is designed to highlight any issues in front structural protection.

Unfortunately for Tesla, the 2017 Model S only achieved an “acceptable” rating in that particular test. While the electric car scored “good” ratings in the other tests – moderate overlap front, side, roof strength, and head restraints – it needed that fifth success in order to get the overall 2017 TOP SAFETY PICK+ award.

“Despite lengthening the side curtain airbags to improve small overlap protection in the Model S, Tesla ran into problems in the test when the safety belt allowed the dummy’s torso to move too far forward,” the IIHS said in its report. “That allowed the dummy’s head to hit the steering wheel hard through the airbag. Measurements from the dummy indicated that injuries to the head, along with the lower right leg, would be possible in a real-world crash of the same severity.”

For its part, Tesla says that a fix which should address the problem is already in the pipeline. The current IIHS rating applies to any Model S built after October 2016 – effectively those cars with the latest Autopilot HW2 hardware – but the automaker says a production change on January 23 has been made with small overlap protection in mind. That, though, is yet to be tested, though IIHS is working with Tesla to get its crash-test dummies inside the newer car. 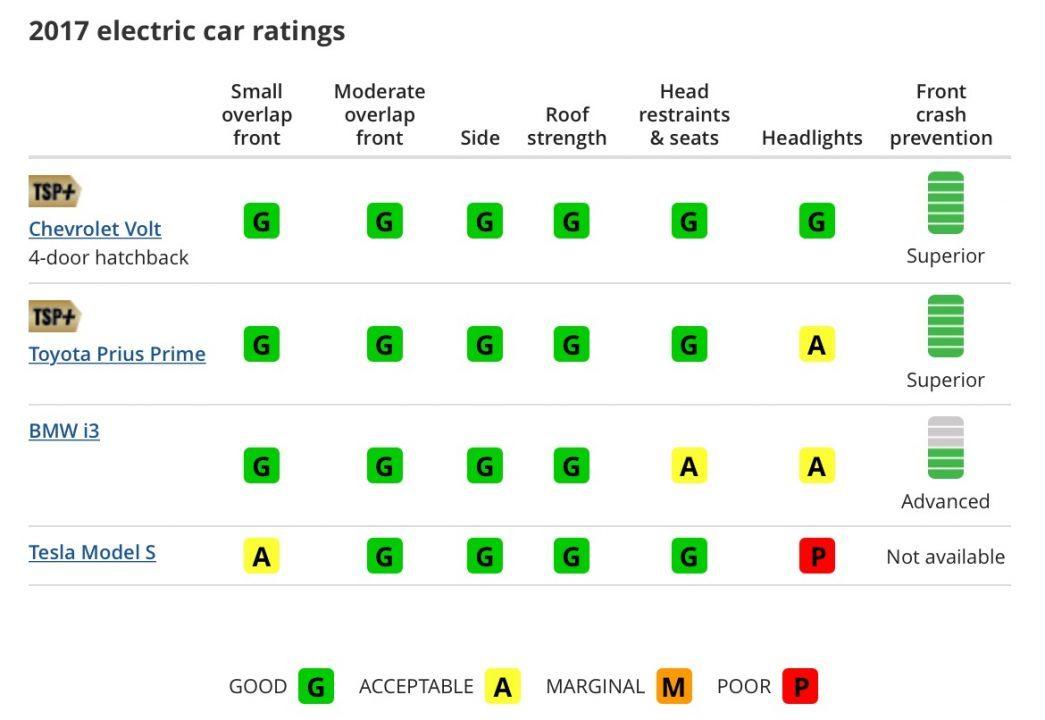 Still, it’s not the only blot on Tesla’s score book. Its fastest model, the Model S P100D, gets knocked for its roof strength. The poor performance there is actually a side-effect of the car’s longer range: Tesla added more batteries and thus increased the weight of the car, IIHS argues, and thus even though the P100D has the same roof as its lighter range-mates, it will do worse in the vital strength-to-weight ratio that judges how well occupants might do in a rollover situation.

Tesla’s car also wasn’t judged on front crash protection, since the automaker is still in the process of activating the feature across HW2 cars. That began at the beginning of 2017, and is expected to roll-out progressively as Tesla monitors real-world feedback for any signs of potential problems. The IIHS also criticized Tesla’s choice of headlamps for the Model S; the automaker says it’s working with suppliers to improve them.

It’s not just Tesla which is having a bad day courtesy of the IIHS, mind. BMW’s i3 also gets criticized for its headlamps, and only scores an “acceptable” in organizations’s head restraint and seat evaluation. That looks at how well a vehicle protects against neck injuries, in the case of a rear crash.

“While such injuries are rarely fatal,” the IIHS points out, “they are the most common type of crash injury and can cause debilitating pain.” An optional front protection system, when fitted, nudges the i3 into the “advanced” rating.

Two plug-in hybrids tested at the same time, meanwhile, did better in the ratings. The Chevrolet Volt and Toyota Prius Prime both get the 2017 TOP SAFETY PICK+ award, though buyers are advised to tick the crash prevention options and high-beam assist on the Volt if they want the best safety. Toyota’s hybrid does well with all its standard safety systems. The IIHS says it plans to test the Chevrolet Bolt EV, Chevy’s all-electric hatchback, once vehicles are more widely available later in 2017.