We sat down at a roundtable this afternoon with Nokia’s Ari Jaaksi, VP of software at the company, and talked about the Nokia N900 and the Maemo 5 OS it runs.  Describing the N900 as “your internet device on the go” and Maemo as “putting the internet first”, it’s obvious that Jaaksi – and Nokia – have the MID segment in their sights; however they’re also upfront about the issues they’re going to face not only with their first-gen hardware but the ongoing development of the platform.

In describing the differentiation between Nokia Internet Tablets as we’ve known them to-date (the 770, N800 and N810), Jaaksi highlighted the most obvious change as being the UI.  However, the underlying business plan is also different, since the N900 will find gaining public attention – through cellular provider stores – far easier than its non-connected Internet Tablet predecessors.  It also makes good use of that connectivity, supporting OTA (over-the-air) downloads and upgrades for everything bar the cellular radios.  Undecided is whether N900 owners will be able to access OTA updates from Maemo 5 to 6, however.

What may present a headache is courting developers.  While kicking off any new platform can be difficult, Nokia of course benefits from the fact that Maemo 5 is open-source based and could, in theory at least, run desktop Linux apps with only minor tweaking.  However that misses the importance, Jaaksi pointed out, of tailoring the UI to a mobile device. 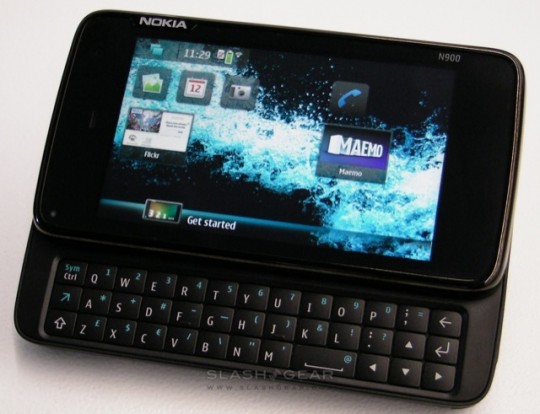 Throw into the pot that Nokia are already working on Maemo 6, set to launch in around a year’s time, and the fact that the new version will use Qt whereas Maemo 5 uses Gnome.  That could lead to incompatibility issues, or developers ramping up to code for the current release but finding those skills aren’t so useful when the next-gen OS arrives.  While he couldn’t describe the full pathway – likely because it’s still in development – Jaaksi did confirm that they would be working with developers on an upgrade pack that takes apps from 5 to 6.

Jaaksi also confirmed some more minor details about the N900.  It will support USB Mass-Storage mode when plugged into a computer, and while they’re not finished fettling the power settings the aim is a full day’s use per overnight charge.  At launch there won’t be N-Gage or Comes With Music support (the latter since the N900 doesn’t support the Microsoft DRM necessary) either.  Interestingly, the hardware design of the handset followed on from the software, rather than the more traditional way round; Maemo 5 was developed, and then Nokia looked at what hardware they’d need “to let the features shine”.

Uncertain right now is whether earlier Internet Tablets will see upgrades to Maemo 5.  Nokia are looking into it, apparently, but the differences in connectivity, hardware and acceleration in the N900 might make this impossible.  Similarly, the reason for the Booklet 3G using Windows 7 rather than Maemo is the oft-quoted netbook justification that customers generally prefer a familiar OS.

The N900 is certainly looking intriguing, and our hands-on earlier today did nothing to change that opinion.  It’ll hit the market in October, priced at €500 pre-subsidies.