T-Mobile USA appears to have dominated the latest batch of mobile data tests from the folks at OpenSignal, beating out bigger names like Verizon and AT&T in the process. How could this have happened, and at what point did T-Mobile begin delivering more reliable and speedier mobile data than their competitors? If T-Mobile’s service is so good, why don’t they have more customers than their competitors? Is it the advertising, maybe the phones they’ve got available – or is it something more subtle, like the shade of pink they’re using?

As mobile data technology improves, data speeds get faster. Every one of the major mobile brands have improved their tech this past year – and continue to do so now. It would seem that part of T-Mobile’s victory in this set of tests is due to Verizon and AT&T’s Unlimited Data plans re-introduction in 2017. (P.S. Many smaller brands also have unlimited data plans.)

After reintroducing unlimited data in February of 2017, both Verizon and AT&T had significant 4G speed and overall speed depressions. This was due to the “deluge of data demand on their networks,” said OpenSignal. T-Mobile took no such hit since they’d had “unlimited data” for a while before Verizon and AT&T jumped back onboard. Above you’ll find a graph of network speeds over the past year – this data is also from OpenSignal. 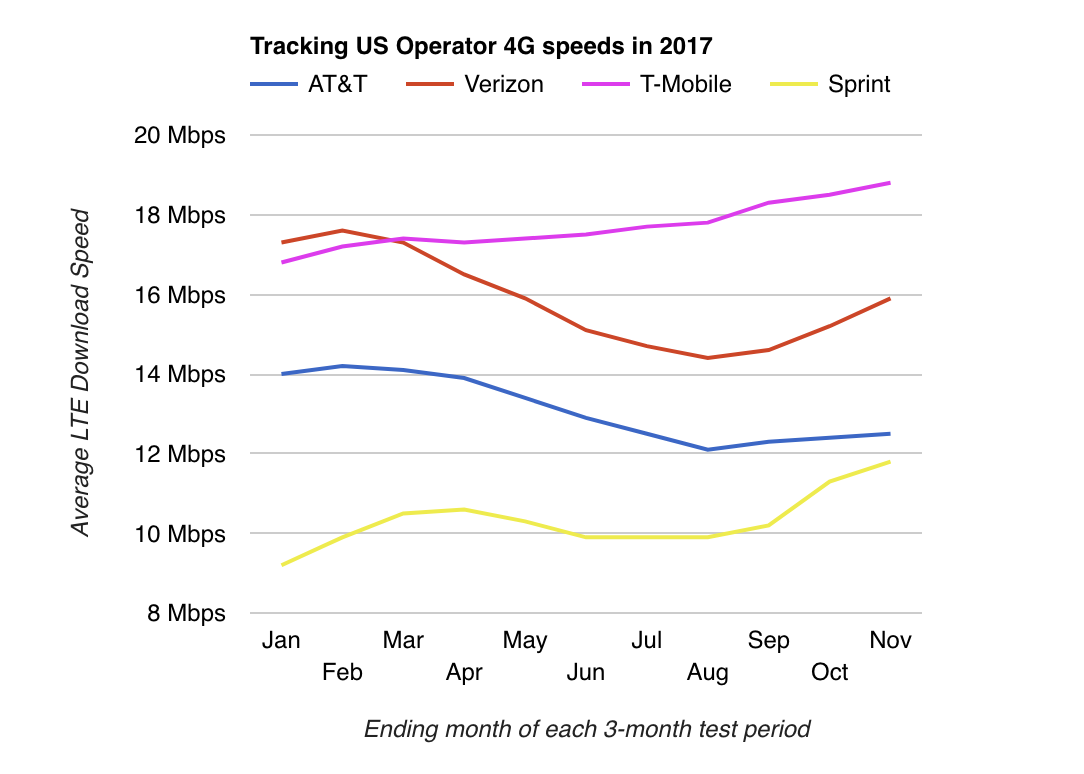 The date range of this newest study was October 1st through December 30th of 2017. Verizon and AT&T’s network load seems to have returned back to normal – but it would appear that neither brand returned to utter dominance in the tests OpenSignal runs. As a result, T-Mobile beat both larger brands by a slightly smaller margin than Q2 of 2017 and Q3 of 2017.

The only test that T-Mobile doesn’t win is Latency 4G. T-Mobile takes second place in that test. Availability of 4G is a telling metric in this test: “This metric shows the proportion of time OpenSignal users have an LTE connection available to them on each operator’s network,” said OpenSignal. “It’s a measure of how often users can access a 4G network rather than a measure of geographic or population coverage.”

The major fill of availability for 4G in all 4 networks surprises me. Not because I don’t believe the results, but because over the past several years 4G coverage seems to have truly become accessible almost anywhere in the USA. And that’s impressive. T-Mobile wins this category too, albeit by just about the smallest percentage possible over a tie to Verizon. 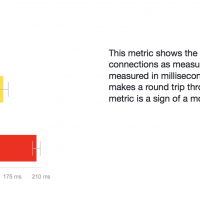 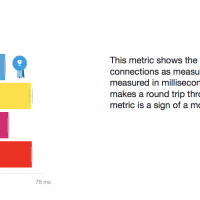 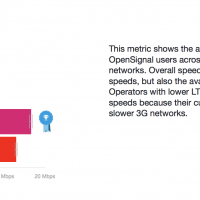 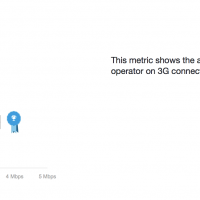 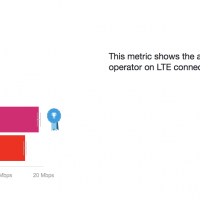 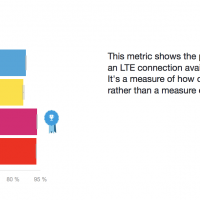 The data OpenSignal works with include what they call “real-world” tests, run across the United States. These tests are run largely by collecting data from the brand’s app, “OpenSignal – Speed Test & Maps.” This app is available for both iOS and Android devices.

This newest set of tests were run in the 4th quarter of 2017 and 237,213 devices contributed to the tests, all within the United States. OpenSignal has been in the business of tracking data speeds in the United States for 7 years, and now have offices in London, Singapore, Mexico, and California.