T-Mobile UK say G1Touch is next Android phone; Huawei U8230 confirmed for carrier

Hot on the heels of T-Mobile USA’s confirmation that they’d be announcing their new Android smartphone next week comes details on a new Google phone from the carrier’s UK arm.  T-Mobile UK have just revealed that their second Android phone will be called the T-Mobile G1Touch; meanwhile, according to PC World, Huawei Technologies have announced that their U8230 Android smartphone will go on sale with T-Mobile in Europe late in Q3 2009.

The Huawei U8230 has a 3.5-inch touchscreen, a 3.2-megapixel camera and use a Qualcomm chipset.  The manufacturer has stated that the runtime from the 1,500mAh battery will be longer than any other Android phone.

There’s no word on whether it’s the U8230 that’s being called the G1Touch, or if – as has been expected so far – it’s actually the T-Mobile version of the HTC Magic.  That smartphone is already on sale in the UK, as the Vodafone Magic, and was expected to arrive on T-Mobile USA at least as the myTouch 3G.  We may have to wait until next week to get some solid clarification on which handset is which, and what all the official names are. 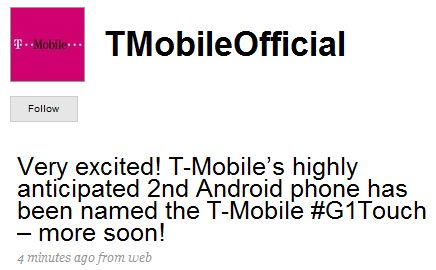