You may have seen the AT&T newspaper ad a few days ago that attacked T-Mobile for its slow data network and the high number of dropped and failed calls. However, T-Mobile got a kick out of it, but it looks like they’re not letting AT&T have the last word. The company is prepared to push out several advertisements to newspaper as early as today.

TmoNews got their hands on some proofs that have already been sent to T-Mobile for approval, and the site claims that we could see the ads in newspaper as early as today, but there’s no word as to what newspaper the ads will show up in. However, we’re guessing that they’ll make an appearance in the same ones that AT&T used for their ads, including The New York Times and USA Today. 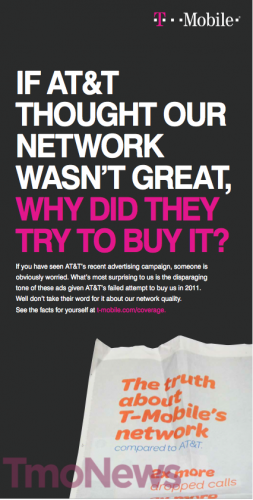 TmoNews also says that the marketing team behind these new ads is the team responsible for recent T-Mobile commercials, including the helicopter promotional ad that recently aired. As for the newspaper ads themselves, there are three total from the looks of it, and each say something different, including, “If AT&T thought our network wasn’t great, why did they try to buy it?”

Other phrases that T-Mobile uses in the ads include, “What keeps AT&T up at night? Apparently us.” and “Can you see the beads of sweat in this ad?”. Then below each clever phrase, T-Mobile addresses AT&T’s recent newspaper ad against the company, and notes that “someone is obviously worried.” Obviously, things are getting feisty between the two carriers, and we’re pretty excited to grab our pale of popcorn and watch this all play out.