Supposing you’re a die-hard BlackBerry user and you’ve seen the T-Mobile USA advertisement released this week targeting you directly, you may feel puzzled. This advertisement shows the iPhone 5s and blasts the message “GREAT OFFER for BlackBerry customers”. Since this message was posted earlier this week, BlackBerry users and top brass alike have taken to the soapbox to speak out against it.

BlackBerry CEO John Chen made clear that they were not informed of the advertisement before it was released. He suggests that he “can only guess that T-Mobile thought its “great offer for BlackBerry customers” would be well received,” following up with a clear “T-Mobile could not have been more wrong.” 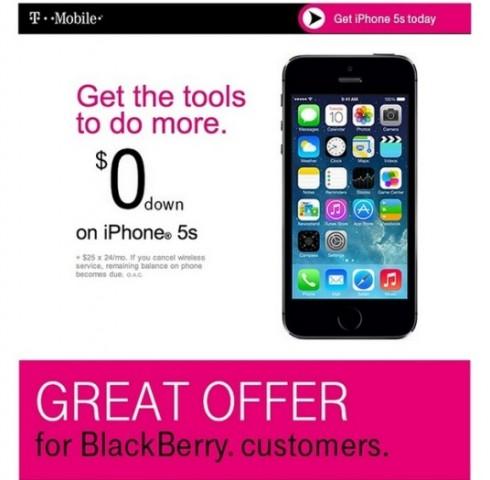 After seeing this extended letter as well as what Chen suggests was an expression of “outrage” with BlackBerry fan tweets, calls, and comments, T-Mobile USA CEO John Legere responded with his own set of messages through Twitter. These messages were also followed up with PR sent to news sources from T-Mobile USA.

“BlackBerry users, I’m hearing you loud and clear. Let me work with the team and get back with you. … Checked with team. We may still send emails w/ device choices, but you don’t have to give up your BB. We continue to support. …

We give our customers choices, but you don’t have to give up your #loyalty.” – T-Mobile USA CEO John Legere

The note that came this week after Legere’s quotes suggest that they’re more than willing to support the BlackBerry response. This includes a bit quicker shipping of devices in the BlackBerry family to users wishing to show their support with cash.

“We are happy to be a BlackBerry partner and apologize for any confusion. … as an additional courtesy to our BlackBerry customers, we will begin offering free expedited shipping of BlackBerry devices by Friday.” – T-Mobile USA Spokesperson

Also VIA the LA Times it’s suggested that T-Mobile USA will (continue) to allow unlocked BlackBerry devices to be brought in to be (re)activated with the T-Mobile USA brand.