With it’s lovely 4.30inch super AMOLED qHD display, Android 4.0 Ice Cream Sandwich with the newest version of HTC Sense version 4.0, and an aluminum unibody design, this device is set to bring T-Mobile in on the HTC One line with style. This device is just 7.95 mm thin, comes with Google Music pre-installed aside Beats Audio integration for an “authentic and richer sound experience” true to the HTC One line, and will have T-Mobile as its exclusive USA carrier for the duration of its life. 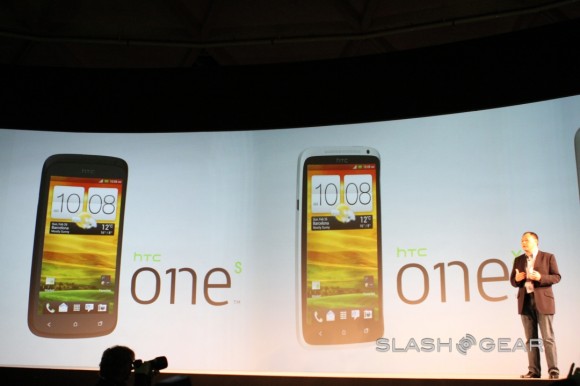 The HTC One S with T-Mobile has an 8 megapixel camera with both a 0.7-second shot time and a 0.2 second autofocus (faster than the blink of a human eye), these combined bringing you what HTC notes is “nearly unlimited continuous shots.” The camera on this device has an f2.0 lens concurrent video and still capture, and 1080p quality on all back-facing movies. The HTC One S falls in with the rest of the HTC One line with the most superior and high-class set of specifications HTC has yet offered, the HTC One line being the manufacturer’s “all in” strategy for an experience that they say you will find intensely personal – so get pumped up!

For the rest of our coverage of this device and the rest of the HTC One line here at Mobile World Congress 2012, hit up our [HTC One X portal], or go ahead and follow the rest of this week’s events in our [MWC 2012 portal] – more mobile than you can handle, all week long!