Microsoft’s Skype has had their Twitter account, Facebook account, and blog of hacked this afternoon by the Syrian Electronic Army. This hacker group appears to have taken the holiday opportunity to lay posts in staff’s absence, suggesting their reasoning is to reveal Microsoft’s supposed monitoring and selling of email data from Outlook and Hotmail to “the governments.”

At the time this article is posted, two Twitter posts have been entered by the entity suggesting they are the Syrian Electronic Army and confirming their actions through their own Twitter and Facebook accounts and those of Microsoft’s Skype. Posts are currently being deleted in turn, suggesting further that this was and is no joke.

UPDATE: Skype speaks up, assuring the public that no user information was put at risk.

“We recently became aware of a targeted cyber attack that led to access to Skype’s social media properties, but these credentials were quickly reset. No user information was compromised.” – Skype Spokesperson 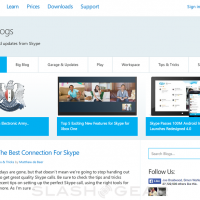 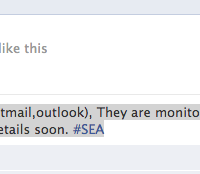 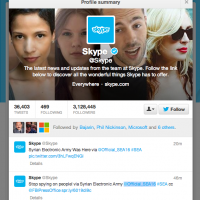 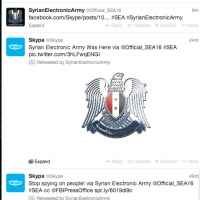 Perhaps most interesting in this series of events is the Facebook post by the Syrian Electronic Army suggesting the following:

Don’t use Microsoft emails (hotmail,outlook), They are monitoring your accounts and selling it to the governments. More details soon. #SEA” – Skype Facebook account status

These posts were made each in the span of 40 minutes, with Twitter and the blog post coming first, followed by the Facebook account soon after. It would appear that though the posts were unnoticed for the first 40 minutes (or so), an intrepid Microsoft employee discovered the hit and quickly cleaned up.

UPDATE: The blog appears to still be under command by the SEA, as another post has appeared with the same text as the Facebook post listed above.