Synaptics’ Fuse concept is starting to look a little prescient, now that we’re seeing devices like the Motorola BACKFLIP and Notion Ink Adam putting trackpads on their rear panel despite also having touch-sensitive displays. We caught up with the Synaptics team at MWC 2010 this week to find out what they’ve been working on, and spend some very literal hands-on time with their Fuse prototype.

The concept behind Fuse is that a touchscreen and/or D-pad is not always the best way to control a mobile device, especially if you’re trying to do so single-handed. Instead, Synaptics have used their various sensor technologies to suggest alternative paradigms for use: the Fuse has a capacitive touchscreen, but it also gets accelerometers, a rear-panel trackpad and side-mounted pressure sensors.

Squeeze the sides, for instance, and then tilt the phone up and down, and it scrolls through the main menu; a quick squeeze flicks from the current app to the homescreen. Alternatively you can run a finger across the trackpad on the back, and the icons bulge to show where you’re virtually touching. Everything is accompanied by haptic feedback, with the Fuse vibrating to let you know when you’re passing a button or on-screen icon.  The side sensors also respond to strokes, too, for more granular control.

There’s some pretty complex rendering going on inside, too. As you move the Fuse from side to side, the lighting pans across the 3D icons accordingly. Thanks to the accelerometers you can tilt the handset 45-degrees and have the widgets tip over as if about to tumble off; a flick on the touchscreen then rotates them round, meaning each widget has twice as much space to display data. 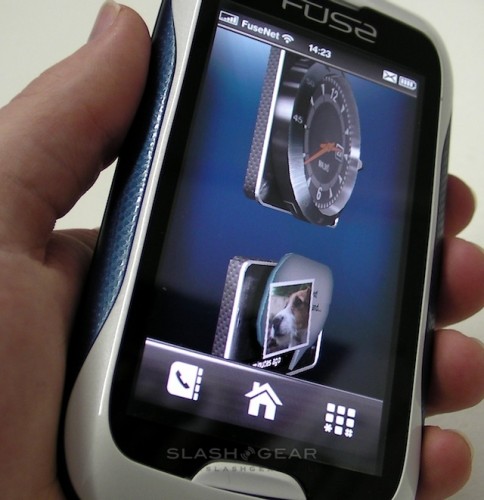 To be honest – and Synaptics agree – the combination is overkill for a single handset. Attempting to hold the Fuse in a way whereby you can effectively squeeze the side-sensors often means your palm brushes the rear trackpad, sending the screen whizzing away, while sometimes there’s a sense that not everything is actually communicating with each other. In a production device you’d probably only have one or two different sensors, and make more use of dynamic rendering and accelerometer response.

It’s pretty tricky to describe in text, so check out the video demo below and the gallery. Synaptics had several prototypes with them, but all were proving pretty buggy at the show; we came across one of the devices while it was going through a stable phase, so some of the motions and gestures you won’t see anywhere else.