Oh how Swatch has changed its tune in the last 8 months or so. First there was the denial they were collaborating on the upcoming Apple Watch, adding that they didn’t see why these newfangled smartwrist gizmos were all the rage with the kids these days. Shortly after there was a change of heart (or at least someone wised up) and they said they were working on their take of a smartwatch. Jump to today and we have the announcement of the Touch Zero One, a touchscreen smartwatch that is aimed at beach volleyball enthusiasts. No, seriously.

At first glance, the Touch Zero One just looks like a new version of the Swatch Touch, a watch with minimal touch functionality that has been around for four years or so. But the Touch Zero One does indeed have enough features to qualify it as “smart.” The curved screen and backlighting of the original Touch are combined with the touchscreen accuracy that we expect today, and there will even be an accompanying smartphone app, although Swatch hasn’t said if that means iOS, Android, or both. 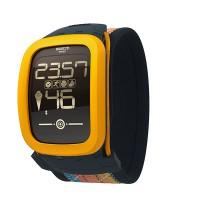 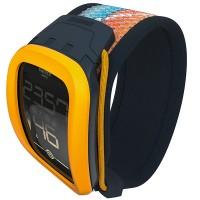 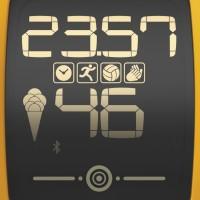 The short story is that the Touch Zero One is aiming to fit more in the fitness tracker category than the full-fledged, do everything wearable. That means no email, text, or phone call notifications, nor does it control any media playback on your smartphone. What makes it a tad odd is that instead of focusing on general activity or sports tracking, it has several features specific for volleyball.

Sensors on the watch are able to track the user’s number of steps and hits, with Swatch claiming it can differentiate between attack hits, low hits, high hits, and high fives throughout a game. This data is then sent to the app for processing, which can be used to rate a user on a scale of 0 to 100, from beginner, amateur, and up to professional. There’s also calculations of how many calories have been burned, along with progress graphs based on days, weeks, and months.

As for that ice cream symbol on the screen, it presumed to be some kind of motivation marker, as the image starts lighting up at the bottom and working its way towards the top as the wearer continues their workout. Speaking of the screen, there’s no color, but that just means a better battery life, which Swatch says will last for several months between changes, as they are non-chargeable.

While it’s far from competing with the Apple Watch or leading Android Wear devices, an expected retail price of around $159 means the number of features and quality battery life of the Touch Zero One add up to sound like a fair contender in the activity tracker niche. Assuming you really like beach volleyball, that is.

VIA A Blog To Watch
SOURCE Swatch