Microsoft CEO Steve Ballmer made sure to mention quite how well the company did in keeping Surface off the radar before launch, and it seems the firm’s next tablet sleight of hand is already underway. The Windows tablet team “did a good job of keeping [Surface] secret” Ballmer boasted on-stage at the Microsoft Worldwide Partner Conference today, going on to subsequently name-check new acquisition Perceptive Pixel. Make no mistake, though; while Ballmer may have shown the most enthusiasm about that company’s vast multitouch screens, it’s Perceptive Pixel’s potential in Surface-style hardware that could give Microsoft its tablet edge against the iPad.

Perceptive Pixel’s huge-screen multitouch products are certainly the company’s most eye-catching offerings. Scaling up to the 82-inch point, the wall-mounted panels allow for a practically infinite number of fingers touching, swiping and gesturing on them. It’s a crowd-pleaser, for sure, and Microsoft was keen to point out that the technology had been used by CNN for the 2008 US presidential election, among other things.

However, while Perceptive Pixel’s “expertise in both software and hardware will contribute to success in broad scenarios such as collaboration, meetings and presentations” according to Microsoft’s press release, it’s the potential in smaller screens that holds the most promise. The company calls it “Active Stylus“, a system where fingers and digital pens work together simultaneously, and it’s something that could transform future Surface models.

Currently, the widest-implemented pen and touch system for tablets uses Wacom technology. Now, we’re talking active stylus here – where the pen communicates with the digitizer layer built into the display, rather than just mimicking a squishy fingertip as with the numerous capacitive styluses we’ve seen released for the iPad – where there’s a far greater degree of accuracy in how much the tablet knows about the position of the nib. Wacom’s digitizer knows if the stylus nib is near to the screen, and so it can turn off a regular, capacitive touchscreen layer so as not to get confused between touches. That also means users can lean on the display while using the stylus, without their hands being mistakenly picked up as touch points. 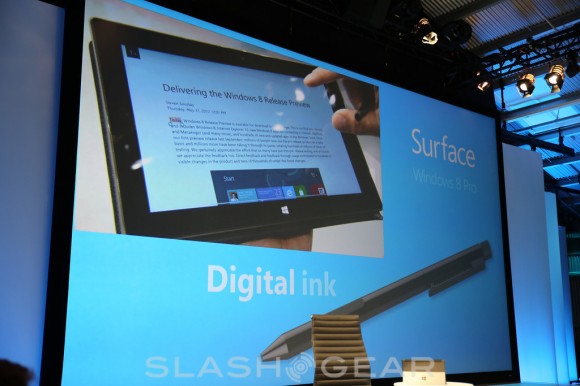 Perceptive Pixel’s system, however, is even more comprehensive. It can not only track the nib up to a half-inch above the display (and even figure out exactly how far it is, the angle it’s being held at, and more) but allow the user to simultaneously use their fingers too. Extra technology differentiates between wrists and palms being rested on the display, too.

Those abilities may look great on a touchscreen bigger than most peoples’ TVs, but they really come into their own on a tablet-scale device. Apple has been happy to leave the stylus market to others, and it looks like Microsoft is keep to pick up that baton and run with it as best it can; if it can prove there’s a valid use-case for accurate, agile pen input that legitimately delivers something above and beyond fingers alone, that could be a real differentiator for Windows-based models.

“[Microsoft] may need to keep a few more things secret as we move forward” Ballmer said cryptically at the event today. “There’s a real advantage to being able to work [undisturbed].” With the initial response to the company’s own-brand tablets being generally positive, integrating Perceptive Pixel technology into next-gen Surface tablets may well be the follow-up clandestine project Ballmer was so keen to tease us about.