Subaru is a very popular automotive manufacturer in the United States, particularly in cold-weather states where all-wheel drive is appealing. In the States, Subaru has been teasing a new Wilderness edition of the Forester. Now that the facelifted Forester has debuted in Japan, and it’s clear that the Wilderness we have been seeing is based on this facelifted version.

The Japanese version of the Forester seen in the images here is presumably the new version for North America. Particularly noticeable is the new front end with a more muscular and angular design than the current-generation vehicle. We particularly like the design of the daytime running lights that resemble a sharply angled “C” around the top, outside, and bottom of the headlights.

Also noted on the front end are new housings for the fog lamps, which appear to be LED. Odds are, the fog lamps won’t be standard on all trim levels of the car. The overall design is very cohesive and is definitely attractive.

It appears most of the design work was done to the front end of the vehicle, with the rear changing only slightly. Design changes have been made to the diffuser area on the vehicle’s rear and some trim on the rear bumper. Just like the front end, the overall design of the rear is attractive. 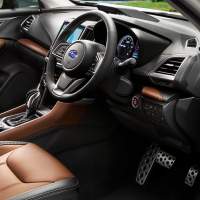 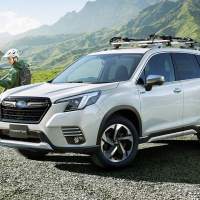 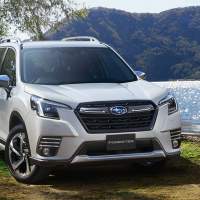 The interior appears to be mostly the same, but since the images show a Japanese version, there is certainly the possibility Subaru would change the interior before revealing it in the States. Subaru has certainly done better with interiors and recent model years. Interiors were often more utilitarian in the past, while the new models have offered significantly more luxury. It’s unclear when the revised Forester will debut in the US. However, we know the Wilderness version will be revealed on September 2. So it would make sense for Subaru to debut other facelifted models around the same time.