Stir’s Kinetic Desk, the smart standing desk which not only shuffles electrically between different heights, but tracks your fitness and teases you with twitches when it thinks you need to change, has gone up for order. Priced at $3,890, the first fifty orders will ship out in February 2014, though everybody else will need to wait for the second production run, expected from April. As we found when we went hands-on with the desk back in September, it’s an expensive way to get off your feet, but Stir’s integrated computer does have some appeal.

Rather than the usual up/down buttons – and maybe a few presets if you’re lucky – of most standing desks, Stir’s Kinetic Desk has a full capacitive touchscreen inlaid into its top. Switching positions is a matter of double-rapping on the screen, at which point the Stir shifts between the preset sitting and standing points.

Alternatively, you can manually control how high or low the desk goes using on-screen sliders. A sensor embedded in the front edge of the desk tracks movement, keeping a log of how much time you spend standing, how much sitting, how much you shift around generally, and how many calories you’ve burned off over the course of the day. Different standing goals – such as wanting to spend 50-percent of your work time on your feet – can be set and monitored.

Stir eventually plans to link the desk into other fitness tracking wearables, using Bluetooth LE, so that your movements can be more globally recorded. 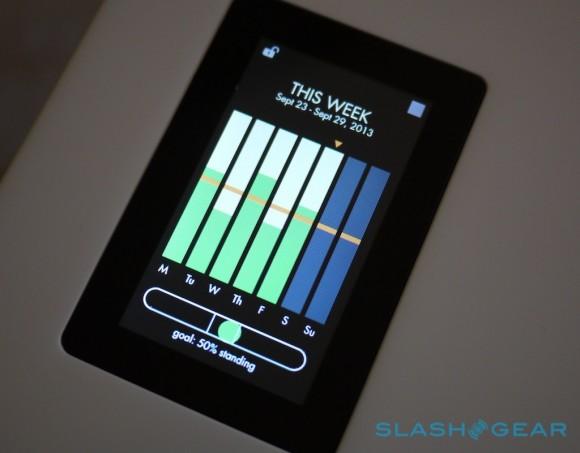 Those goals also change the desk’s behavior. If it decides it’s time you moved, then it’ll gently pulse up and down briefly to remind you; you can then tap the screen to acquiesce, or ignore it.

A $300 deposit secures an order, and Stir will be showing off the Kinetic Desk at Wired’s pop-up store in NYC from December 4th.