Professor Stephen Hawking has been given a new voice, with an Intel-made communications system allowing the famed physicist to express himself more quickly, as well as opening the door to similar technology for others affected by similar diseases. Hawking, who has a motor neuron disease (MND) related to amyotrophic lateral sclerosis (ALS) which has left him almost completely paralyzed, can now type twice as fast as before, while other tasks like web searches are up to ten times faster. Intel is releasing the new software, three years in the making, under a free open-source license.

Hawking’s previous system was several decades old, and had become antiquated while other personal technology advanced considerably. For instance, Intel explains, each function – text-to-speech, web browsing, documents, and such – was in a separate window, with the scientist forced to navigate a mouse pointer between them to change tasks.

In contrast, the new computer is far more cohesively integrated. Switching between tasks is now automated, allowing Hawking to quickly run searches, open and create documents, compose and send emails, and do text-to-speech. 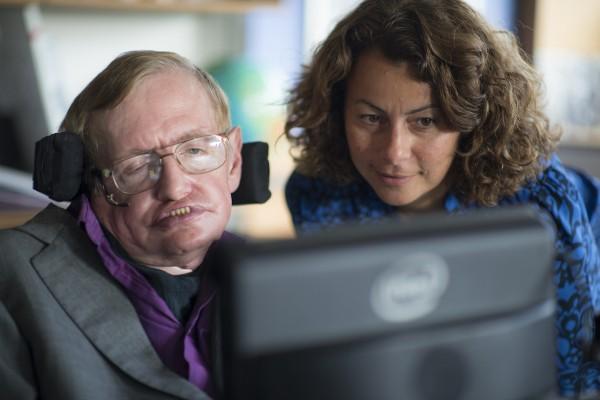 SwiftKey’s learning keyboard technology has been used for predictive text, too, so that less than 20-percent of the characters used need to actually be typed in.

On the hardware side, there’s an infrared switch mounted on Hawking’s glasses that tracks a cheek sensor for navigation and selection. A Lenovo Windows laptop does the processing.

Intel has dubbed the system ACAT (Assistive Context Aware Toolkit), and is promising an open-source version for researchers to experiment with in January 2015.

It should, the company says, be readily adapted to the roughly three million other people with MNDs or quadriplegia, whether controlled by a blink, touch, eyebrow movement, or some other input.