SteelSeries has come out with a new game controller for iOS 7 devices, but this time it’s thinking big. The SteelSeries Stratus XL is being billed as a full-sized wireless game controller that aims to deliver maximum control and comfort when playing any of those hundreds of compatible iOS games.

SteelSeries actually already unveiled a gamepad, the original Stratus, at CES 2014 early this year. Compared to that, however, the Stratus XL is huge. Not terribly huge, just your regular-sized Xbox-like controller. You will definitely be sacrificing a bit of mobility with this, unless you don’t mind carrying it around with you in your bag. Perhaps SteelSeries would prefer you buy one Stratus XL for home and a smaller Stratus when on the road.

In terms of features, the Stratus XL definitely has room for everything that the Stratus has. You have a pressure sensitive D-pad, four pressure sensitive action buttons, two analog sticks, a total of four shoulder pads, and an LED indicator in the middle to show how many controllers are connected to a single iOS device. Yes, it can do multiplayer, as long as the game supports it.

The Stratus XL connects via Bluetooth and, since this is iOS we’re talking about, no NFC for easy pairing. The whole rig is powered by two AA batteries and SteelSeries has included a very helpful indicator on the underside of the controller to show you just how much juice you have left. The gamepad is only compatible with devices running iOS 7, and probably higher, but you won’t be wanting for games, as SteelSeries claims that over 300 games work with it. 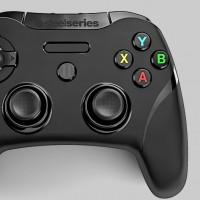 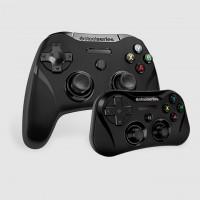 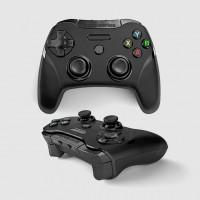 If the SteelSeries Stratus XL has your heart skipping a bit, better calm down for a while. The company hasn’t revealed yet when, except for a generic “later this year”, and where it will be available and for how much. The controller is, however, available for viewing at E3 2014 this week, so if you’re in town, you could try to take a sneak peek as well.