We’ve had a few Steampunk items come up on here before, and we’d be lying if we said that we didn’t hold a natural affinity for these things. How can you not? The workmanship alone makes these gadgets pretty amazing, and whil the aesthetics might not be for everybody, we find it hard to deny the sort of primordial attractiveness these devices have. Like this cell phone for example, which was caught on picture from Russia, and encompasses everything Steampunk in one solid form factor. We’ve got plenty of shots after the break.

Steampunk originated as a form of fiction, based in an alternate-reality 19th Century Earth. In this universe, inventors made huge leaps in technology by creating things like computers from the materials of the time period, like iron and and brass, even with steam power. As for today, Steampunk may have a slightly different meaning in the sense that the above creator manufactured his phone, but you can obviously see the essence of the science-fiction is still there. Very, very much there. 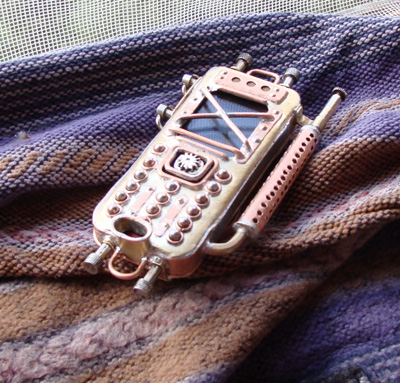 Standard Steampunk creations usually have the basic feature set, created by the more standard materials such as: metals like copper or brass; rivets; gears and cogs; wood; glass; antique light bulbs; and leather. As for the phone, there isn’t any word regarding what exactly the manufacturer used, but we can gather from the images that there’s definitely glass, and rivets closing that metal case together. He’s got some extra things on the back, like covers for “ports” that make it look like an industrialized compass. And there’s even a pipe on the side, just in case all that steam power needs an outlet to release, you know? No word on how to buy it, or what it could cost. So, just stare.