After spending just a few minutes with Valve’s new Interactive Recommender for Steam, I can already see the massive improvement. I’ve been using app stores and game stores since before they were digital, and I’ve never experienced such a smooth process. This is a positive, well-planned, thoughtful, non-intrusive way to use machine learning, and I’m glad it was a gaming company that had to be the first to make it happen.

What can I do with this?

With the Interactive Recommender, Steam Labs created a system with which machine learning turns gaming activities into recommendations for future purchases. This system uses the power of massive amounts of smart compute hours to take all your gaming activities and process them. The result is a list of games in which you’ll most likely find interest.

This list of games is then further sorted according to your wishes, including such granular controls as “weight by popularity” and “include only releases since” with a range between Popular and Niche, Older (back to 10 years old) and Newer (back to just 6 months old).

Why is this different?

Google uses a whole lot of machine learning in their day-to-day operations, with everything from basic search term history to recordings of your voice, grinding that data into actionable data for services like Google Ads. Advertisements are the name of the game for Google, still, here, now in the year 2019.

Google Play – and basically every other app store and game store – makes recommendations to you, the user, based on your game-buying history. They see that you’ve purchased several VR games and they recommend that you buy other VR games. Steam Labs suggested this week that their Interactive Recommender does something quite different.

According to Steam, “the model learns about the games for itself during the training process.” Instead of just seeing that you’ve purchased a game from Genre A and recommending another game from Genre A, this system takes into account what you’re doing IN the games.

So if you’re playing a VR game, but in that game you specifically tend to do a side-game which involves spray painting, Steam takes that into account. Instead of more VR games in general, you might get a spray painting-linked game that might not be in virtual reality whatsoever! 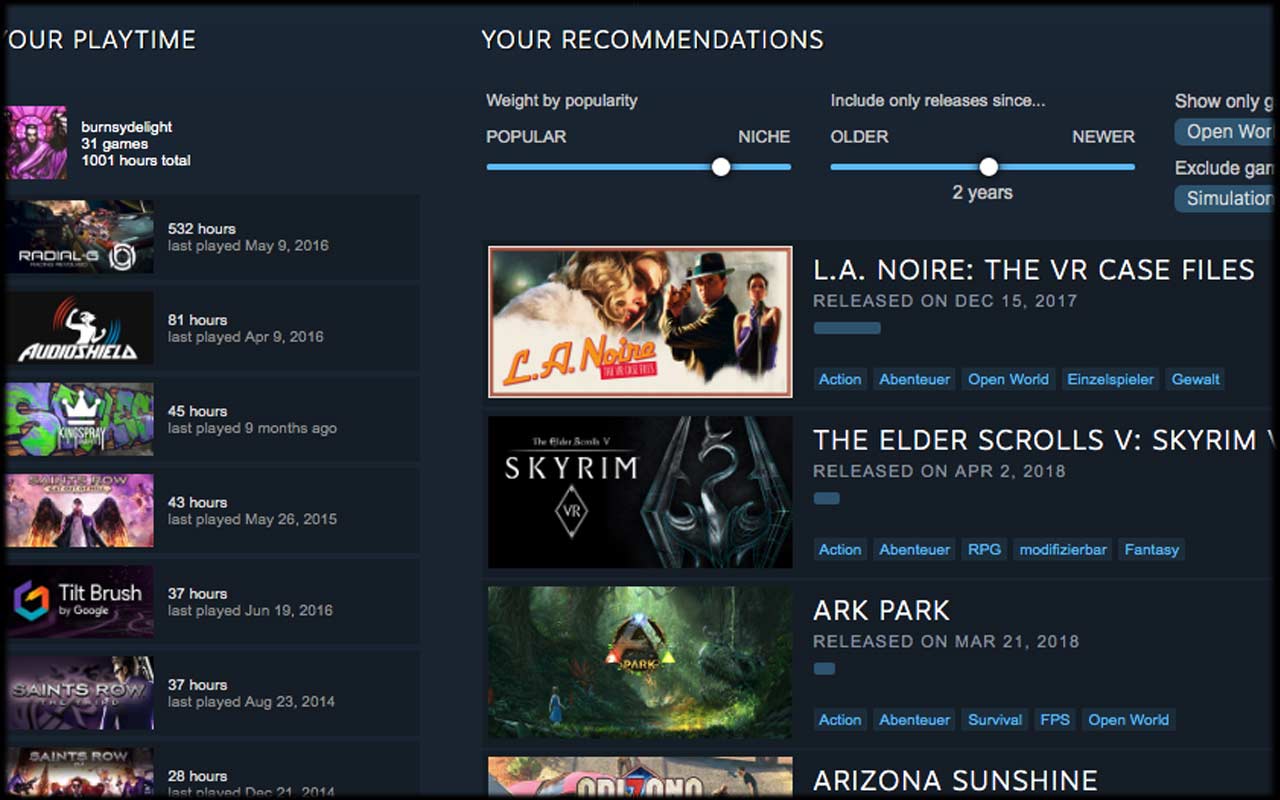 Where do I find Steam Interactive Recommender?

You can try this system over at the Interactive Recommender at Steam right this minute. Let us know if you’re shocked at how many hours you seem to have played Radial-G on your secondary account, even though you barely remember opening the game at all!