There may be a few spoilers in this article, but non that you wouldn’t have already seen had you watched the first teaser trailer for Star Wars IX. That’s the last film of the 9-film series centered on the Skywalker family. Of particular note is the title, one that ties together everything, and might as well be the name of the entire series: The Rise of Skywalker. Film 3 was Sith, Film 6 was Jedi, Film 9 is the balance of the force – AKA Rey is the chosen one.

In the trailer they head to a planet on which a Death Star has crashed. That’s the Death Star II, mind you. In concept art for The Force Awakens, we’ve seen multiple panels showing Rey (Kira) scuba-diving through the Death Star II, finding turbolasers and the Emperor’s Throne Room. It wouldn’t make more sense to go hunting the first Death Star when so little happened there – unless Rey’s looking for the death-place of Obi-Wan Kenobi. Maybe Rey is actually just a clone of Ben (senior OR junior)?

Why else would Rey go looking for junk in a submerged relic like the Death Star? Unless she’s searching for data files held by the Empire that might lead them to the truth about her family. And yes, we’re aware the Empire held massive logs of information just so they never had another incident like that whole “whoops, Darth Vader had a couple kids nobody knew about” type situation, followed by the “oh darn, Vader’s kid just killed the Emperor” incident.

But wait, you might say, didn’t we confirm in The Last Jedi that Rey was nobody? That Rey was, in fact, just Rey, not necessarily blood-related to any other character in the entire series of films? That might still be true, but consider the following. 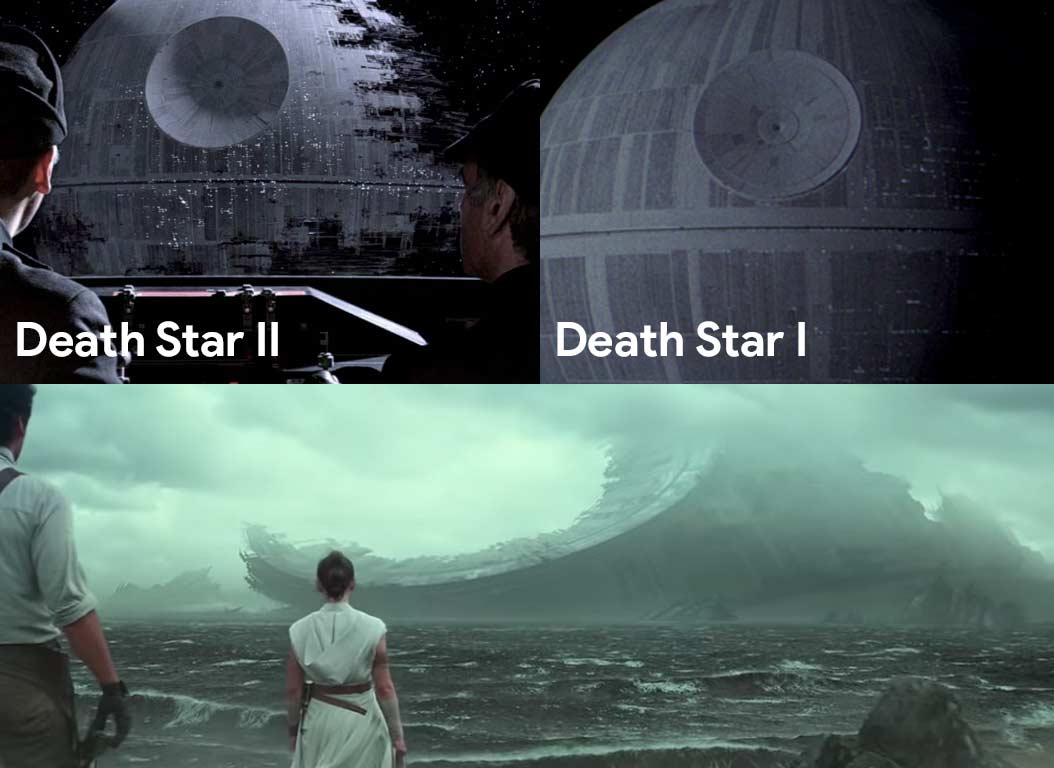 Yoda warned us about Dark Side methodology all the way back in the Prequels. Kylo Ren wanted to misdirect Rey, or at least make her feel like she was as unimportant as possible at a moment where he’d be able to take advantage of her feelings of worthlessness. But take heed! Even Kylo Ren might not have known the truth.

When Star Wars was first released (and later re-named Star Wars: A New Hope), George Lucas did not tell a single person about Luke Skywalker’s heritage. Because at that time, it was unimportant. And more importantly: Lucas didn’t think he’d be able to make more than one film, so he kept this expansion detail out of the first release.

As each Star Wars movie is made, its creators are given some wiggle-room, as you should know quite well by the massive amount of difference in consequential happenings in Star Wars: The Force Awakens and Star Wars: The Last Jedi. When The Force Awakens was made, nobody knew for certain what was about to happen to Luke Skywalker – or at most, they had just a general idea.

Unfortunate for clue-hunters like you and I, there’s no one definitive way to divine the truth of the matter – not until we see the actual film. Or read the script, or a novelization, or something like that.

We’ve seen countless misleading releases, false leads, and straight up misinformation in the modern age of Disney in trailers from several studios – mostly Marvel and Lucasfilm – so from a set of brands that we know are willing to be sneaky to keep their secrets secret, we can’t really know for sure until we know for sure.

But I think Rey is Mara Jade’s daughter. That’s what I want. If that turned out to be true, I’d probably punch a hole through my popcorn bucket in happiness. Can you just imagine?