Here in the spring of 2013, very little is clear on how the now Disney-owned Lucasfilm will be going about releasing the next wave of Star Wars films. What is clear is that they will, indeed, be releasing not one, but several live-action films based in the Star Wars universe – but that small an amount of information isn’t going to stop the massive waves of fans of the series creating mock-up trailers such as the one you’re about to see today, passing them off as real for the fun of it.

The trailer you’re going to see is not real. It’s been made with music from Lucasfilm, newly created text panels, and a Costume Test of a character from the video game Knights of the Old Republic. That’s not to say that it isn’t fabulously inspiring.

What you’ll see next is the screen test the ominous bits of the mock-up you see above, created as a project completely separate from what you see above. Here you’ll find an extended collection of clips filmed and posted without special effects, with a character made “entirely from scratch” by the talented Darth Serberus, aka the owner of “Order 66 Creatures and Effects”, Julian Checkley.

Filming was done, according to Checkley, by Kamil Photography with a Red MX camera that’d originally been reserved for a different project entirely. It was only on a whim that this bit of footage was made real.

This costume was made for fun – and to wear at special events like comic book conventions, of course – but was not licensed by Lucasfilm or Disney. In other words: it wasn’t made for Knights of the Old Republic, nor was it made for Star Wars Episode 7. 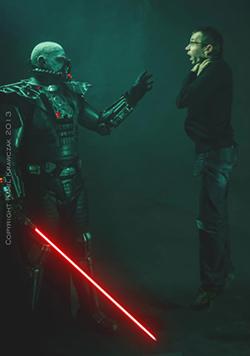 This is the level of devotion and healthy obsession shown by fans of the Star Wars universe. This is how important this next film is to the public.

Unfortunately, it’s likely that with Disney at the helm, nothing so terrifying as this will ever see the big screen. With the direction the Star Wars movies have gone in even at their darkest, there will not be blood. It’s the fans, again, that will need to take charge if there’s ever going to be a Darth Malgus outside of a video game.

Images of the costume outside the video posted above and below come from The Prop Forum where Checkley has posted in-progress makings of the masterpiece. He’s made it clear that though he’s worked in the film industry for 20 years, he’s out for now – he does add the following, on the other hand:

“I learnt my skills working in the film industry for 20 years but now I mainly make private commissions. But if JJ came calling I could definitely be tempted back! ;)” – Checkley

Let us know if you find any other fabulous fakery for the future of Star Wars between here and the first actual trailer for the film, and don’t ease up on the alternate universe iterations!