What you’re about to see is a glimpse of the awesomeness that is the Disney and Lucasfilm archives-approved comic series “Star Wars: Before The Force Awakens.” This is working with Jenn Heddle from the Star Wars story group. This means you WILL indeed be able to count on these panels being canon for the movies. This comic is being written and illustrated by “Writer Hong”, an awesome creative fellow in Korea. He’s releasing this comic in paper form (eventually) AND online for free – at first, at least. This is the story of Luke Skywalker. The parts of his story you didn’t see.

This story starts before A New Hope, moves on through the original trilogy, and (again, eventually) after Return of the Jedi as well! This entire story is being told from over the shoulder of Luke Skywalker, from Luke’s perspective. Because of this, it’ll tell stories you didn’t get to see.

What we’re going to do here is translate a few key moments from the first few comics so that you can see what new bits of information are being revealed as soon as possible. 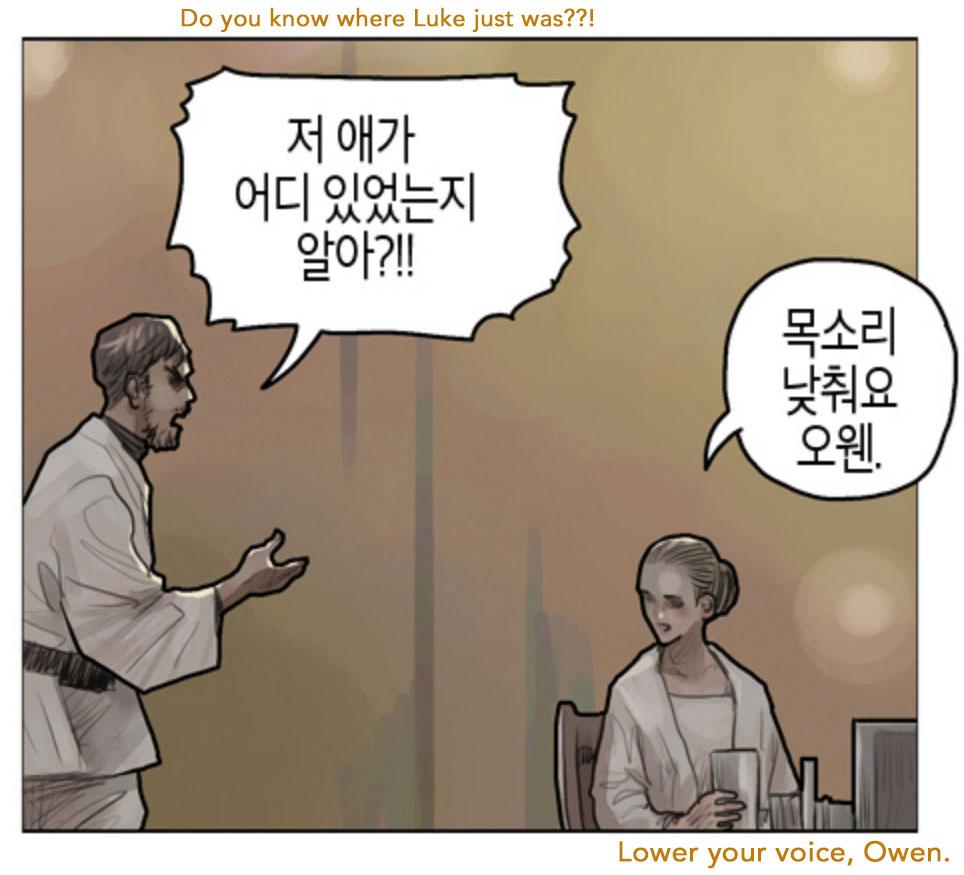 Above and below you’ll see young Luke, still living with Uncle Owen and Aunt Beru Lars. He’s gotten in trouble for staying outside too late at night.

It’s too dangerous to stay out late at night on Tatooine, as you’ll remember from more than one film in the past. 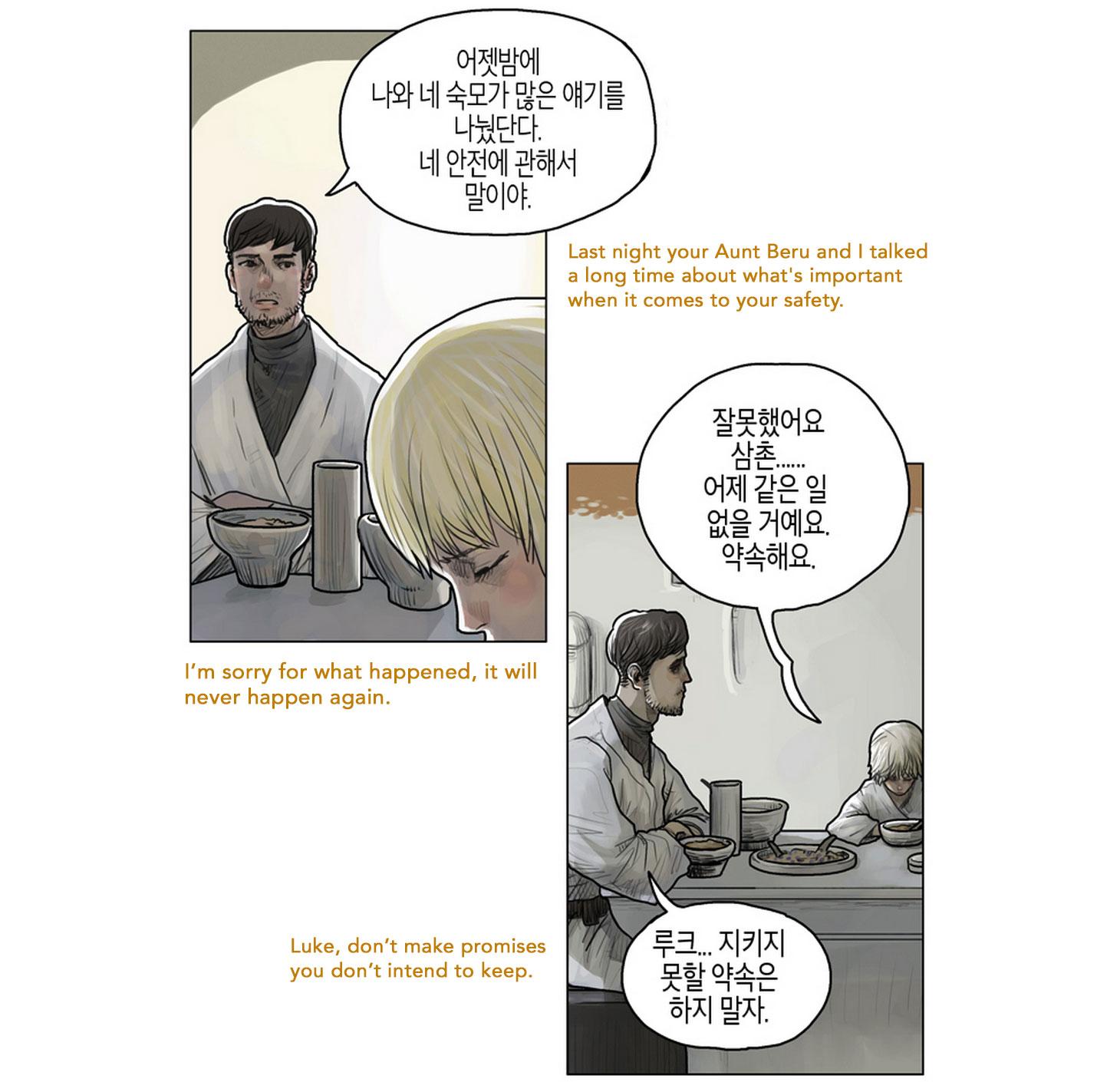 Uncle Owen is very protective of Luke, but he’s not all brass tacks. After letting Luke know that he’s always going to want him to be safe, he suggests that he’ll teach him how to shoot a rifle after breakfast. 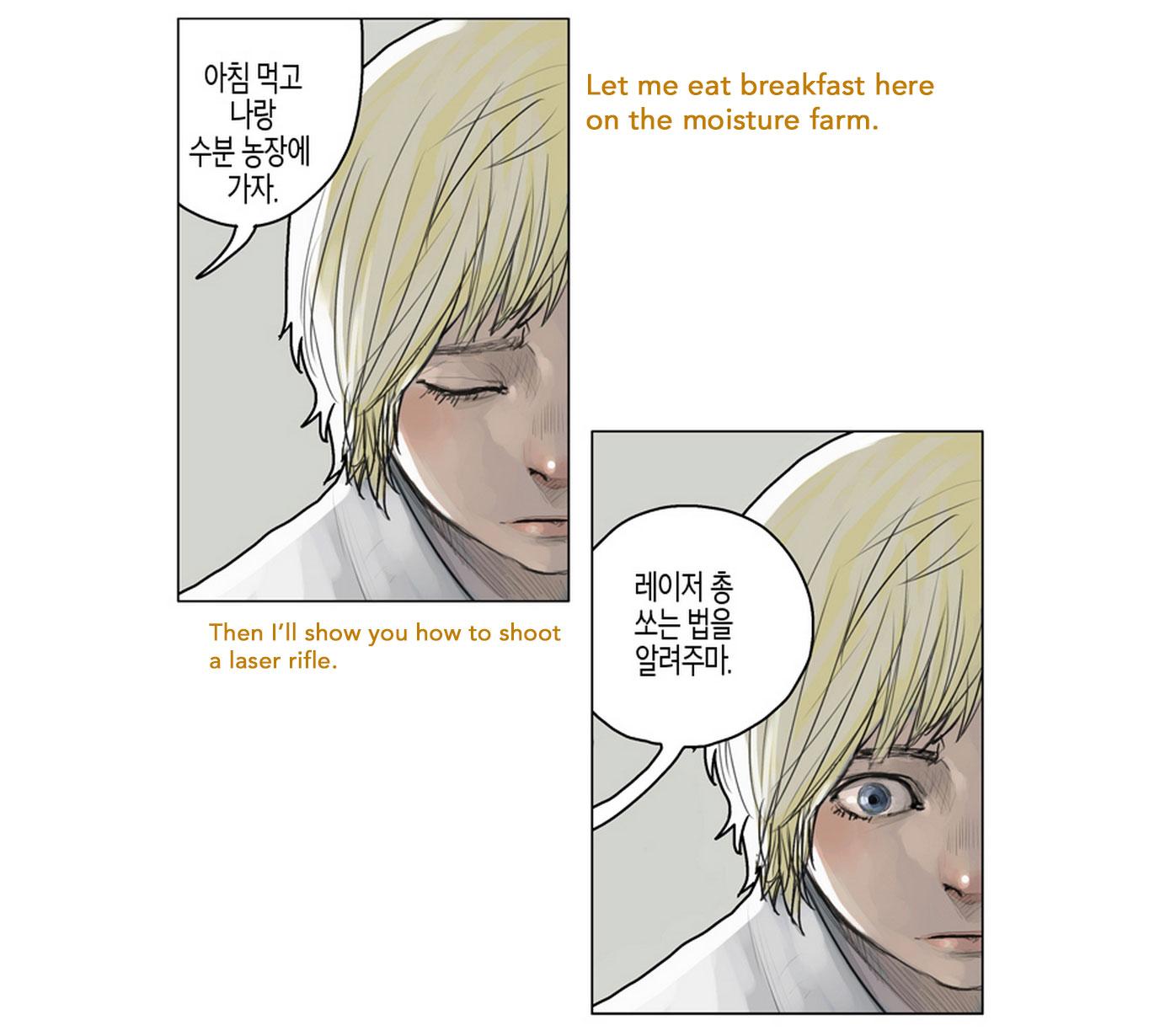 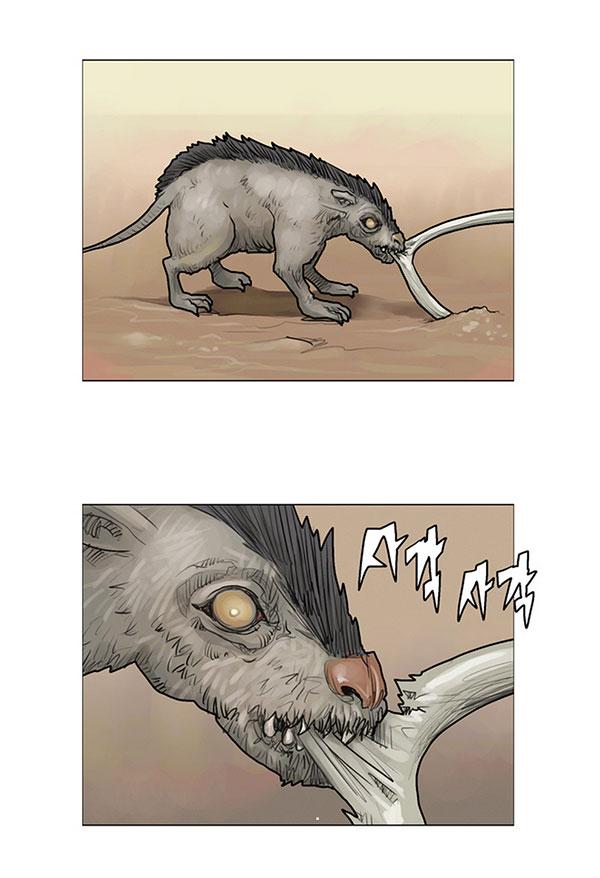 Later Luke will target these tiny beasts with his T-16 skyhopper as well. He’ll be a crack shot, in fact. 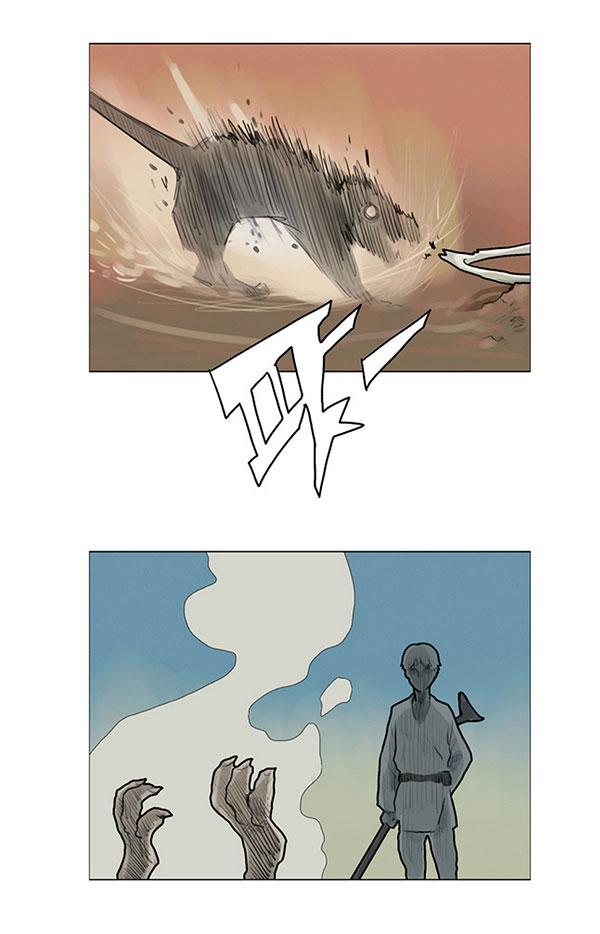 Fast forward a bit into this particular adventure and you’ll find Luke alone in the desert, about to be attacked by a creature you might recognize. Lucky for him, a crazy old wizard happens to be watching over him. 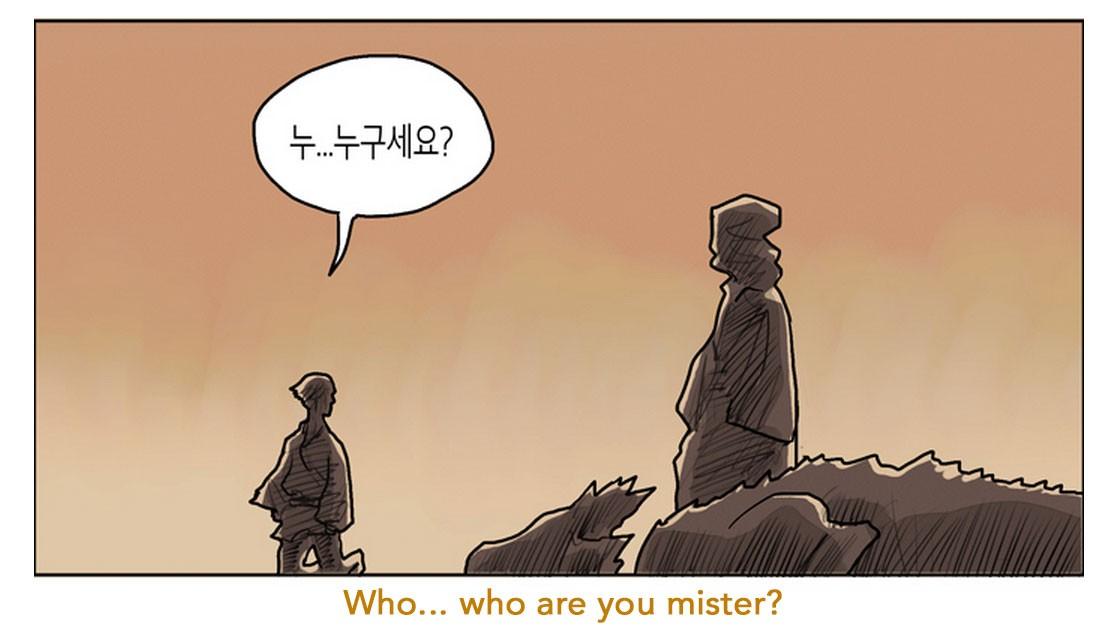 And THAT is the first time Luke and Obi-Wan meet. 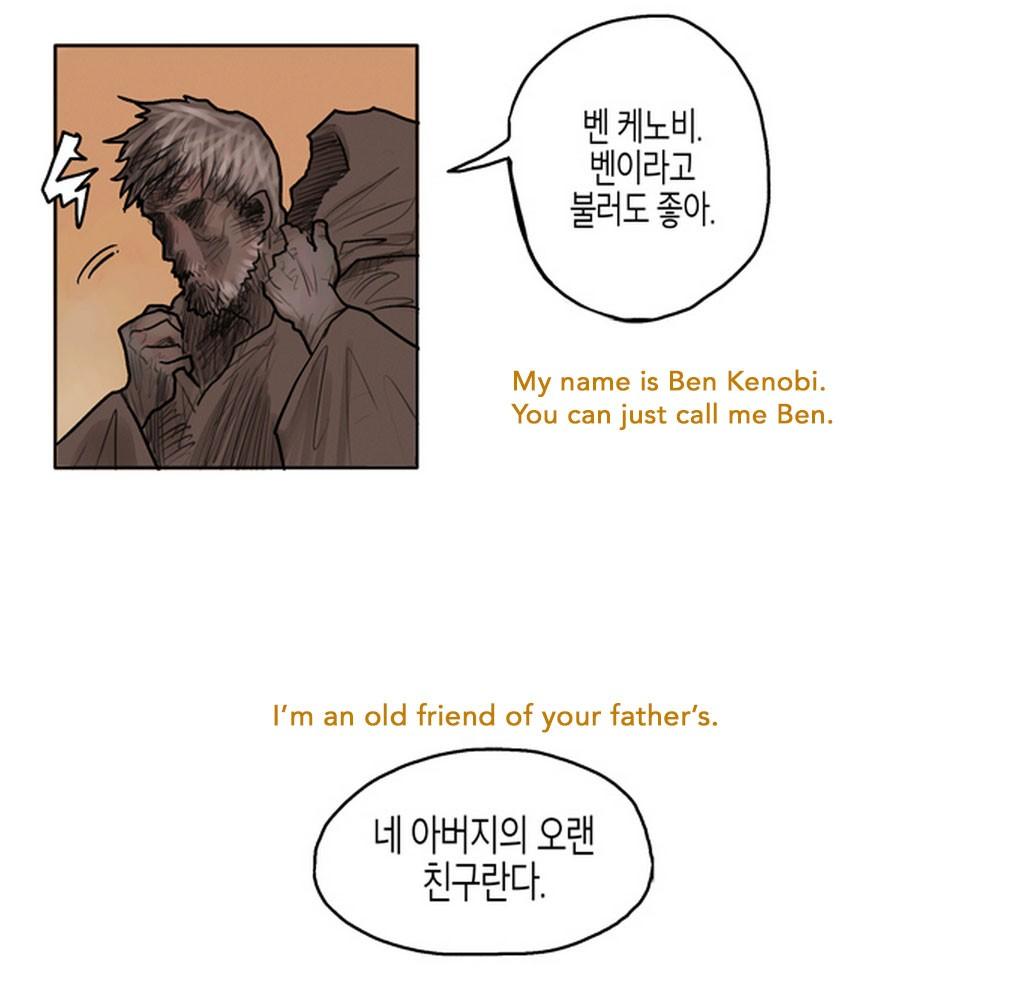 One big story, all sorts of different media!

All manner of different masters of arts, all contributing to this one fantastically diverse environment!

This comic gets a brand new episode that’ll appear every Friday. It arrives through the artist’s webpage at Daum: Writer Hong presents Star Wars: Before The Force Awakens, and we’ll be reading with fingernails dug deep in kneecaps!

Stick around SlashGear’s Star Wars tag portal for more – we’re going deep with all the new canon action all the time!