If you’re a fan of the original Star Trek series, especially its role in modern science fiction history as well as television history, you’ll be glad to see Google’s newest Doodle, celebrating the birth of the series. It was on the 8th of September, 1966, that the show first broadcast its opening sequence, and set off “Where No Man Has Gone Before”. The doodle was headed by Google’s Ryan Germick who spoke with Entertainment Weekly about the situation, noting that it was Google‘s talk of a talking computer who could “get exactly what you want and have that kind of engagement, where the computer just knows all” just as it is in the Star Trek universe – thus this celebration was born.

It is the 46th anniversary of Star Trek: The Original Series today (or tomorrow, depending on which day you actually believe the pilot aired), and with it comes Google’s Doodle complete with the main cast spun into the letters of the brand word. You’ll find Spock as the G, Uhura as the O, Kirk as another O, Scotty as the G, Sulu as the L, and there’s no sign of McCoy anywhere! The E is what’s referred to as a “Red Shirt” crew member, as evidenced by clicking on him in the transporter room and seeing him shiver in terror as it’s almost inevitable that something terrible will happen to him soon.

This Doodle allows you to click in on several different interactive bits in each of the several scenes presented in the standard box size. Episodes from the series are shown in cuts, starting on the ship’s bridge and eventually bringing you down to the planet where you’ll be battling the Gorn. The Gorn creature also takes on the shape of a letter, and you’ll tap a set of elements for Kirk to access and bust him down with a home-made cannon, just like in the episode “Arena.” 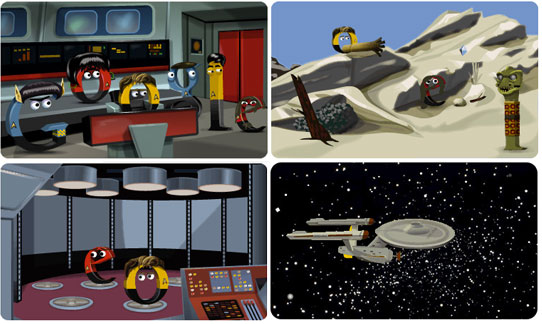 What a fabulous way to celebrate the series that, believe it or not, didn’t really do all that fabulously in its initial run on TV. The power of the series as a whole, and the significance of the characters in the series and what they represented to more than just standard sci-fi television audiences – that’s what made all the difference. Star Trek is now a massive industry of shows and movies which has existed for generation after generation of fans.

“For me, it was a vision for the future. I think it was also that it was multicultural, pro-science, and full of curiosity and passion. I think like a lot of good science-fiction, it sort of says a lot about its present era. We can really appreciate what Star Trek did in its time. As an adult, you can appreciate how progressive it was. You learned to be compassionate towards all kinds of people — even alien creatures. Also, the style is just incredible: retro-futuristic. There’s so much to love. As a person that loves technology, there is so much to be inspired by. Being able to get the answers right away — that was from a crazy, far-flung era where computers were the size of refrigerators. And now, I’m so happy to work in the industry I’m in. So some of the realities from the vision of Star Trek are coming true. To be part of a company that makes it happen is really exciting.” – Germick

NOTE: Those of you who have a subscription to Netflix streaming content library can watch the entire Star Trek: The Original Series episode by episode right now – they’re up, and they’re still excellent!