Square, the service that lets individuals and retailers accept credit card payments on your mobile device with a branded card reader, is set to make an announcement tomorrow (Monday, Dec. 9), but we don’t yet have a solid idea of what it might entail. There are guesses, mind you — as there always are. The mysterious tease photo came by way of Vine today.

TechCrunch has passed on two interesting hypotheses about tomorrow’s announcement. Both have to do with the technology in the hardware itself rather than in the Square app. The first and more likely hypothesis involves new chip-and-pin readers for wider international applicability.

The second is that it could integrate iBeacon. This one is more of a stretch. But in the event it were true and accurate, it would dovetail nicely with Apple’s recent push of iBeacon technology to all 254 of its US stores. 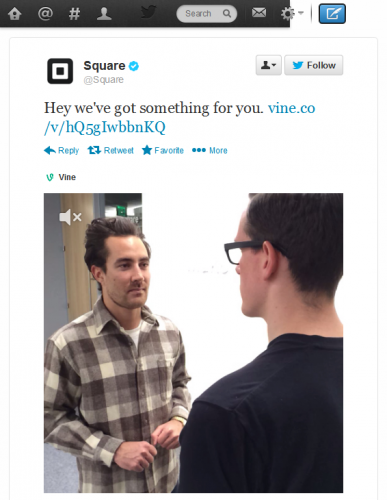 The last major announcement from Square came in October when it launched Square Cash. That feature lets you request and send money with an email. The service brought it into par with PayPal and other payment services.