We weren’t short of praise for the HTC Hero when we reviewed the European GSM model back in July, and since then there’s been no small amount of anticipation for the US version of the device. That arrives on Sprint come October 11th, and we’ve been playing with it to see whether its lost its charm in the journey across the Atlantic.

The key differences between the original Hero and the Sprint version are its casing, its battery and its connectivity. Where the GSM Hero has a distinctive, angular body and a protruding “chin” section with the front-panel physical controls, Sprint obviously decided that was too unusual for their customers. Instead, the Sprint Hero resembles a standard candybar smartphone, with a curved casing and flat keys clustered around a larger trackball than on the original device. Unfortunately it means that one of the GSM Hero’s nifty design side-effects – that the screen, buttons and trackball are lifted off the desk when you place the phone face-down – isn’t shared by the CDMA model.

Still, it fits in the hand well and it keeps the excellent 3.2-inch HVGA capacitive touchscreen with multitouch support. A brief glance around shows how polarizing the original Hero’s design proved, so we imagine there will be plenty of people happy to see the more sober chassis of the Sprint model. 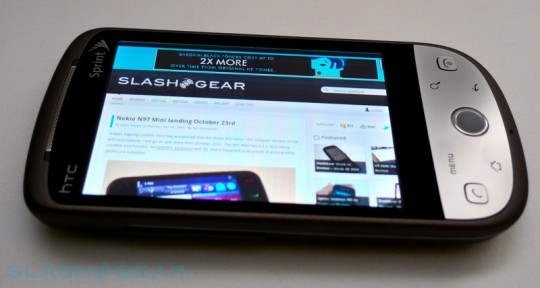 As for software, we’d recommend reading our original HTC Hero review first, as we won’t be retreading old ground. HTC Sense, the latest evolution of the company’s UI ethos, is the same on the Sprint version as we saw – and loved – on the GSM model, so everything we said in the first review holds true here. Performance of the original Hero was criticised and prompted a recent firmware update from HTC which addressed much of the issues; it seems the Sprint version has updated firmware as standard, as it runs quicker than the GSM model initially did. However, we’ve noticed occasional lags and freezes that weren’t present in the GSM version, so we can’t say that the Sprint Hero is as slick as the iPhone 3GS (which has a faster CPU). 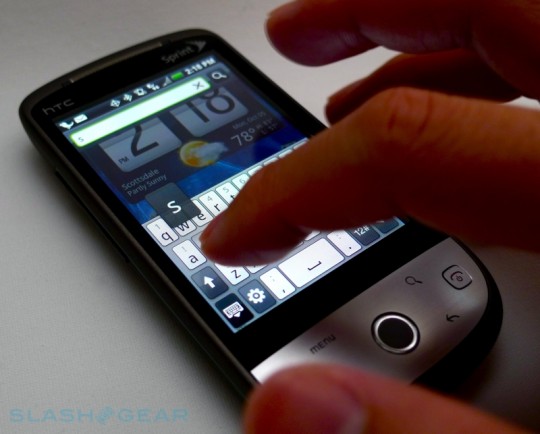 The Sprint Hero’s battery is larger than the GSM model, a 1,500mAh pack compared to 1,350mAh. With heavy use, though, we were still recharging it each night – that’s with both EVDO Rev.A and WiFi active, push email turned on and frequent browsing, Google Maps use and general playing. Scaled down to more casual use, and the Hero lasted two days. That’s pretty much par for the course for a modern smartphone, we’ve found. While HTC use their own, proprietary ExtUSB port on the Hero – which bundles USB and audio together – you can also plug in a standard mini-USB for charging and syncing.

Another change – and a welcome one – is Visual Voicemail, which Sprint adds on together with their Sprint Navigation app. The latter requires a subscription beyond the trial period, but the former works as long as you have a contract with them, and does make navigating messages more straightforward. Unfortunately Sprint’s NASCAR app is another preload, something we’d prefer they made optional. Still, it works speedily over the EVDO Rev.A network, as does the Hero’s browser (which supports multitouch gestures and Flash video) and Google Maps (which still doesn’t support multitouch, but does have Street View). 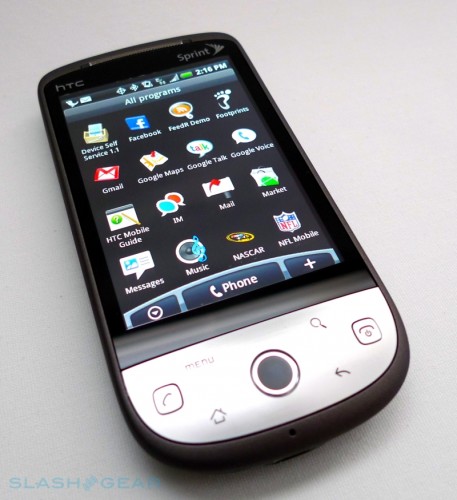 Back when we reviewed the GSM Hero we described it as the best Android device to-date. Since then, Motorola have shown their hand – in the shape of the Motorola CLIQ with MOTOBLUR – and, until we have a chance to test out their device, we’ll temper our praise and say that the Hero is the best non-QWERTY Android smartphone right now. The physical changes to the Sprint CDMA version are a matter of aesthetic preference – we’d rather the distinctive, angular casing, but we know others disagree – and while the software may not be perfect, HTC’s relatively swift firmware release in Europe has shown that they’re still keen to tweak the best from their current range. That, with the solid showing of Sprint’s EVDO Rev.A networking and the UI improvements of HTC Sense, are enough to convince us that if you’re in the market for a US Android device right now, the Hero is the one to have.