SpaceX will be testing its Dragon V2 spacecraft on May 6th, specifically assessing the capsule’s escape system that could save lives during its eventual manned missions. There is no change of humans coming to harm during this test mission because the only “person” going up with the capsule is Buster, the dummy. He’ll ride almost one mile high as the rocket launches from Cape Canaveral, Florida. The capsule will then parachute from its apogee, into a splash-down landing in the Atlantic.

This particular escape protocol is called a “Pad Abort Test” and is part of a launch abort system insisted upon by NASA. According to SpaceX,

“This system is designed to quickly get the crew and spacecraft away from the rocket in the event of a potential failure. It is similar to an ejection seat for a fighter pilot, but instead of ejecting the pilot out of the spacecraft, the entire spacecraft is “ejected” away from the launch vehicle.”

The agency is requiring SpaceX have a reliable way for astronauts to get out of the capsule in case of an emergency, like the ill-fated Challenger mission in 1986. Dragon’s escape system is designed to let astronauts successfully escape the shuttle from initial launch all the way up to orbit. 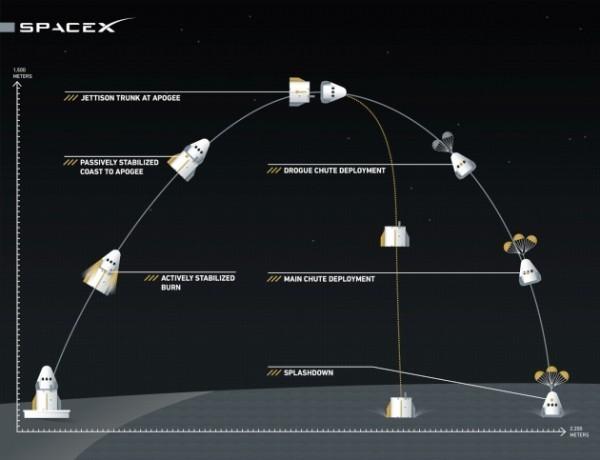 The Dragon capsule is only 23.6 ft tall (including its payload trunk) and is only 12 ft wide in diameter. This mission will fly on eight SuperDracos, 3D-printed, rocket engines. SpaceX’s earlier incarnation of the Dragon capsule first delivered cargo to the ISS in 2012, making it the first commercial spacecraft to do so. Since then, Dragon has finished its fifth official ISS resupply mission in January, 2015.