Back in January, NASA published some inspirational travel posters for far away planets based on real travel posters from the past. Now SpaceX has followed suit, only it wants your attention to be solely on Mars — the subject of its new three retro posters. The space company dropped the posters on its Flickr account over the weekend, and though we doubt this is what life on Mars would actually look like, it’s a fun way to dream of a future in space while enjoy the nostalgia of classic science fiction-like artwork.

They’re the same sort of “hey, why don’t you take a vacation here?” retro travel posters, with SpaceX saying on its Flickr account: ”Adventure awaits! Explore Mars’ ultimate vacation destinations.” Which is both amusing and a little clever — not many would think of moving to the Red Planet, but taking a vacation there? Let’s make that happen. 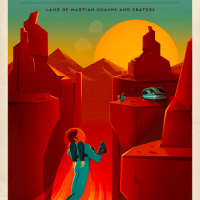 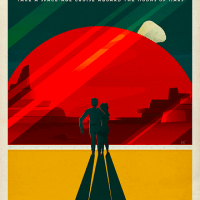 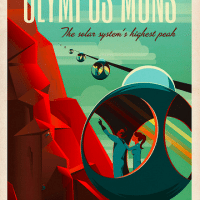 Reads one poster, Discover Valles Marineris, with a man in a tight suit wearing a globular head cover and a jet pack while a family camps on a cliff in the distance (retro-chic camper/spacecraft included). The other poster is for Phobos& Deimos (the moons of Mars, the poster says), as well as “Olympus Mons: The solar system’s highest peak”.

You can see each poster in its entirety above, but if you’re hoping to have them framed on your wall, you can head on over to Flickr (link below) and download the full 7200 x 10800 resolution images for printing. All three posters are in the public domain.